Windows 9: The bloodiest war for your PC is coming soon 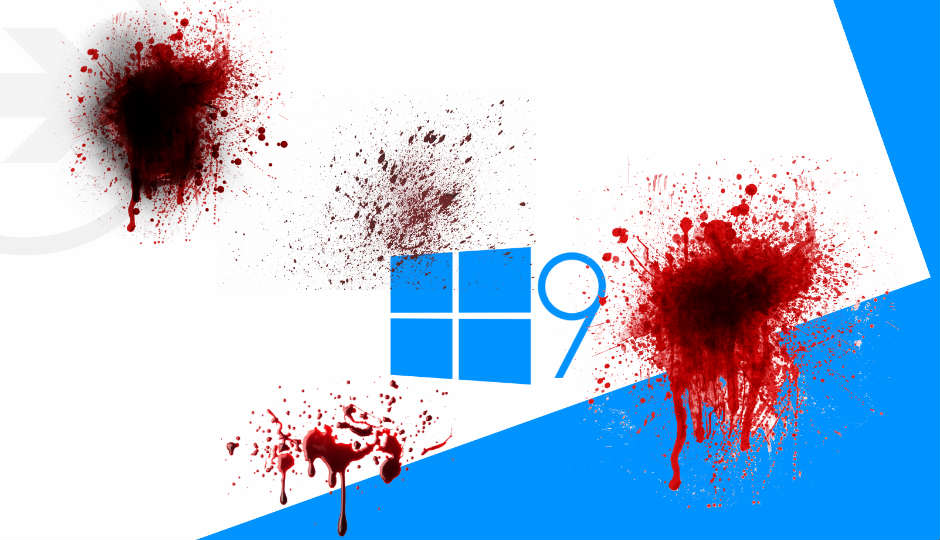 Revolution is never a pretty process. The inherent reason for any revolution is the unhappiness over the status quo and the need for something fresh. Throughout history, technology, especially, has had a good relationship with revolution and a terrible one with the status quo. And when you think about the status quo today, more often than not, Microsoft will come to your mind.

For nearly three decades, Microsoft has ruled the roost when it comes to personal computing primarily because of Windows and its ubiquitous nature. However, with that also came complacency and today Microsoft finds itself fighting to stay relevant especially as the entire PC segment itself is in the midst of churn. Windows is no longer the primary computing OS that rules people’s lives, that spot has been taken over by Android. While Windows still holds sway over work computers and laptops, and niche segments like PC gaming, the rise of the smartphone means that more often than not, Android (and iOS) is the OS that people prefer to use to complement their daily lives.

But now, three quarters of our way through 2014, we’re seeing changes on the horizon, a shift is drawing near that will make Microsoft’s upcoming Windows 9 OS the most significant product it will ever launch.

From about 2011 to late 2013, everyone was in agreement that tablets would eventually supplant laptops and PCs. After all, tablets were gobbling up market share like an army of Pac-Men and the fact that they were more mobile, easier to use and significantly less expensive than laptops were sufficient to tempt buyers away from their scheduled laptop updates. However, in 2014, a new truth has dawned, tablets (except for the iPad and perhaps some versions of the Samsung Galaxy Tab) may be going down the path of the netbook- towards extinction. This is because large screen smartphones (think 5.5-in and above) or phablets are now the preferred purchase for anyone looking for a big screen and mobility. What this means is that suddenly laptops are a viable and relevant segment again after a couple of years of flagging sales and intensifying disinterest that saw brands like Sony and HP step back or quit the segment altogether. In fact, a recent IDC report stated that tablet sales were slowing down while PC and notebook sales were stabilising and could be headed up. 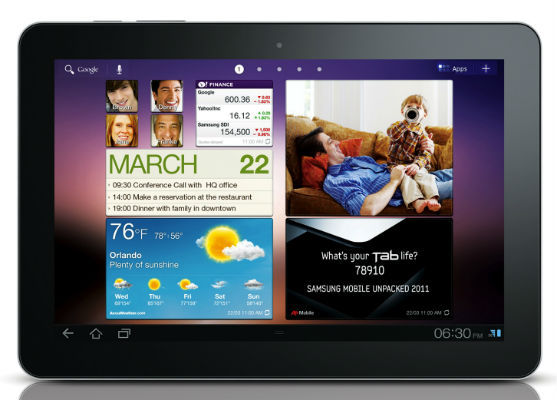 Tablets could soon be extinct thanks to phablets

But now that laptops may be on their way to a gradual rise, does it mean that Microsoft (and Windows) will have an easy time recapturing market share and mindshare?

The answer to that, is a definite no.

At the time when Windows 8 was launched to the general public, Microsoft still wore the crown when it came to operating systems. As I’ve mentioned earlier, that is no longer the case. Apart from the rise of the mobile OS, the decline of Windows has also to do with Microsoft’s own confusion about what it thought its OS stood for. As a result, Windows 8 was an OS designed for touch devices but which ended up being mostly used on traditional laptops and desktops. This confusion itself created some space for competitors to come rushing in, Mac OS X has consistently grown to an extent that it now stands almost at par with Windows 8 in terms of market share. 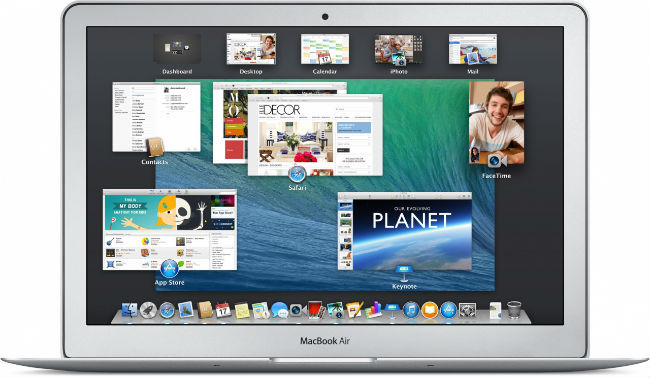 Apple’s operating system has the advantage of great hardware and, in terms of anecdotal evidence, it’s no longer surprising to see folks using MacBooks in offices, cafes and even classrooms. With iOS 8, Apple is planning to reduce the boundaries between Mac OS X and the mobile OS to a greater extent which means that iPhone users will find it easier to adopt Mac OS X and vice versa.

Chrome OS has always struggled for adoption but you can’t really fault Google for trying. While Chrome OS itself doesn’t set too many hearts aflutter, the Chromebooks certainly do. We’ve seen the Samsung Chromebook 2 and it’s a great thin and light machine that’s built really well. Then we’ve got the HP Chromebook 14, another great looking laptop that seems like it has been made for students and light users. The redeeming feature of these laptops is that they are (like most Chromebooks) priced very affordably. For instance, both the Samsung and the HP will set you back only by about Rs. 27,000. 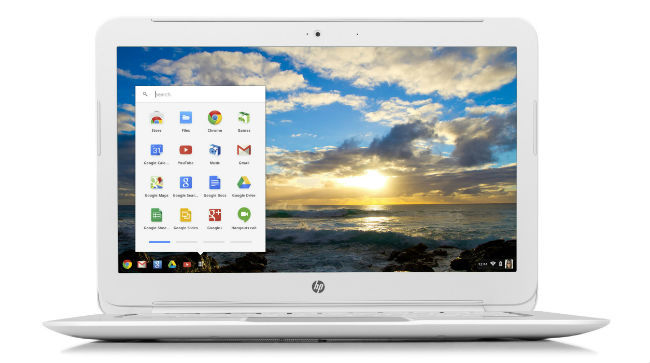 Even though Google has not really had to say a lot about Chrome OS for a while, the OS has been receiving updates and features consistently. Even the Chrome App store that caters to the OS has been steadily increasing the number of apps available for download and there is talk on the horizon that Android apps will soon come to Chrome OS as well.

And then, we come to Android.

Oh yes, even though Google has never really stated any intention of pushing Android to laptops and PCs, we all know the potential it has. In fact, the HP Slate 21 All-in-One PC was one of the best pre-assembled PCs we’ve seen in ages and really shows how great Android can be as a PC OS. I know some Windows purists will laugh at the very idea but give it some thought, ever since the advent of the Android smartphone, have your parents, your grandparents or your young cousins spent more time on Android or Windows, especially during their downtime away from work or school? 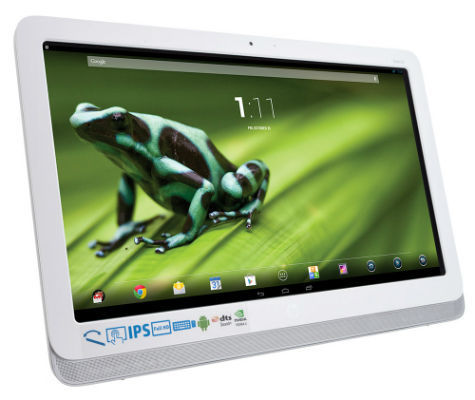 The abundance of apps, games and entertainment options on Android means that it is just a stone’s throw away from becoming a serious competitor to Windows. All that’s left is for an OEM to take a serious approach to making the OS perfect for use with a mouse and keyboard, think a take on Android similar to HTC’s Sense UI but designed for much larger displays and kb+m input.

This is Microsoft’s battle to lose

Despite all of the above, I have to make it clear that unseating Windows as the most used OS in the world is a gargantuan, almost impossible, task. Windows is still used on a massive 91.68% of computers globally with Windows 7 alone holding on to over 50% market share. Couple that with the fact that most laptops not made by Apple, still and will continue to come preinstalled with Windows, giving most users no real reason to look elsewhere for an OS, and Windows has an assured future (at least the foreseeable one).

However, Microsoft cannot and should not, slip back into complacency, especially not now that the market has lit a fire under it. There are very clear indications that Microsoft indeed has no intention of doing that and Windows 9 appears to be a culmination of that.

Over the past few months, we’ve seen screenshots and read details of the upcoming Windows Threshold update, which everyone expects will turn out to be Windows 9. So far, things look good and Microsoft has clearly made an effort to atone for the perceived mistakes of Windows 8.

Here’s what we know (or what we think we know) about Windows 9 so far:

After all the brickbats launched at the Windows 8 Start Screen, it was only inevitable that Microsoft would go back to the drawing board. What has emerged from that process seems to be a merger between the classic Start Menu and elements from the Start Screen’s ‘Modern UI.’ The Windows 9 Start Menu will feature apps in the forms of tiles on the right, and classic icons on the left. You will be able to pin Modern UI compatible apps and certain shortcuts to the right side of the start menu while the left will feature a more traditional ‘Most Recently Used’ list of icons along with the power button, user icon and search field. 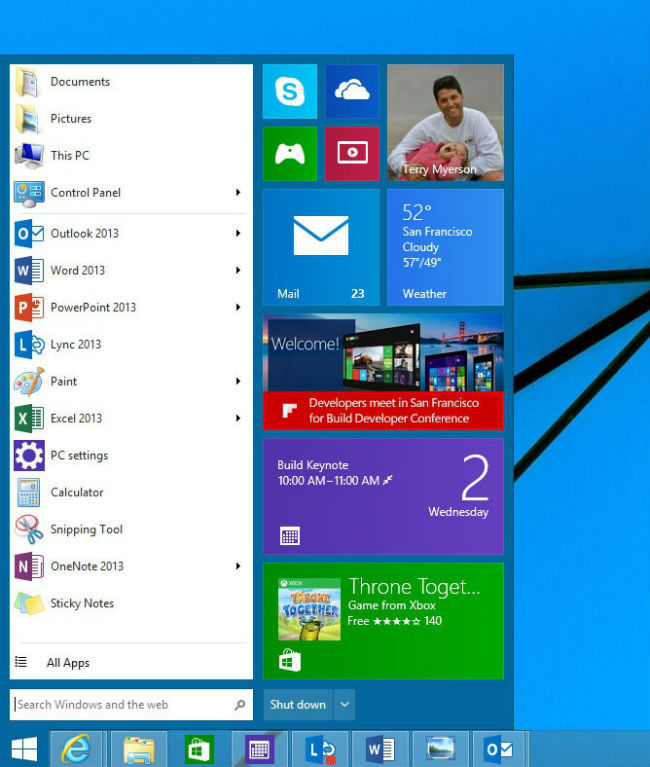 While, just like Windows 8/8.1, Windows 9 is also expected to have an app store, there will be changes to how apps work. Earlier, every time you launched a Modern UI app, it would take over the entire screen. Now you will be able to launch Modern UI apps from the desktop and they’ll open inside a typical window. Only when you click the maximize button will the apps occupy the entire screen just like on Windows 8. In window mode, Modern UI apps will also get a contextual options button which will reveal a menu whose contents will change according to the app. 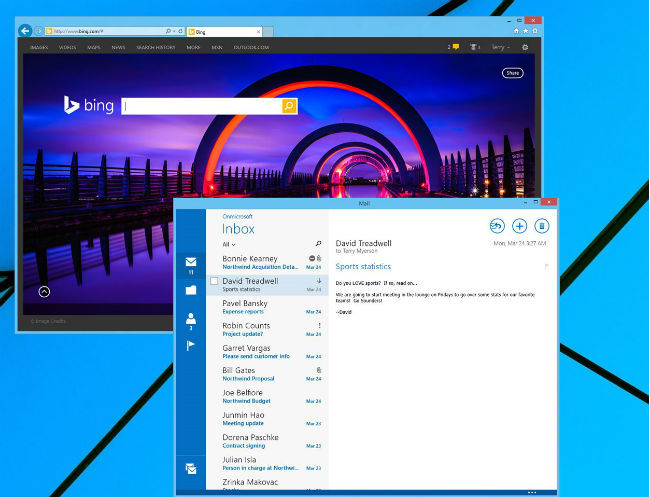 Windows is finally getting rid of the much despised Charms Bar, at least on non-touch devices that will run Windows 9. Instead, in cases when a Modern UI app depends on a Charms Bar action, it will get that option inside the window itself. The Charms Bar will be present on Windows 9 running on touch devices, which makes more sense since it appeared like it was designed primarily as a touch feature on Windows 8.

On Windows 9, the file explorer window will get a ‘Home’ section which will show your libraries, most used folders and recently used files all in one window, making it easier to access files and locations on your hard drives. Explorer will also come integrated with OneDrive, Microsoft’s cloud storage service, and you can get to automatically sync and backup certain folders on your PC, a feature that was introduced in Windows 8.1. 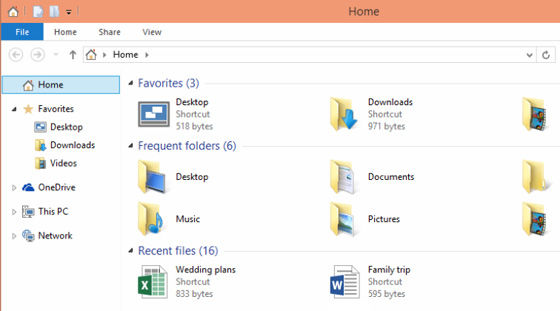 Windows is expected to finally get notifications in its next avatar but how well it works will depend on how well Modern UI apps are integrated into the desktop mode and how many apps can use this feature. For the time being, the notifications don’t appear to be actionable but hopefully that will change. I have to admit, it would be pretty neat to be able to get notifications about incoming emails, Skype chats etc. on your PC. 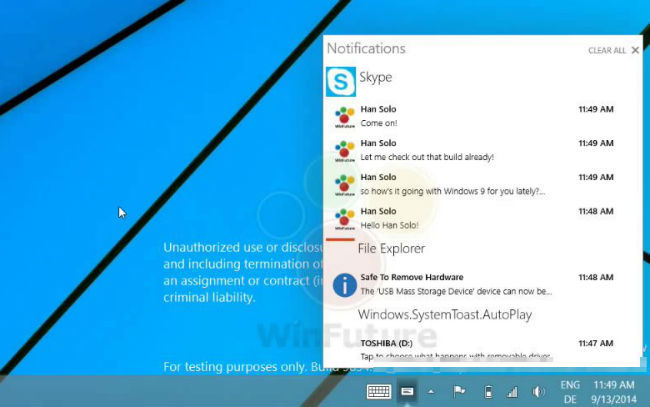 Maybe all the crap that Microsoft got for Windows 8 was a good thing, because it is clearly thinking smarter with Windows 9. While it’s obviously too early to judge Windows 9, all the information that we do have points towards an OS that will continue the unofficial tradition of every alternate Windows version getting more appreciation than its predecessor.

What we are sure of is that with Windows 9, Microsoft has picked up its arms and is ready to fight it out for the honour of belonging on your PC.

And we couldn’t be happier.