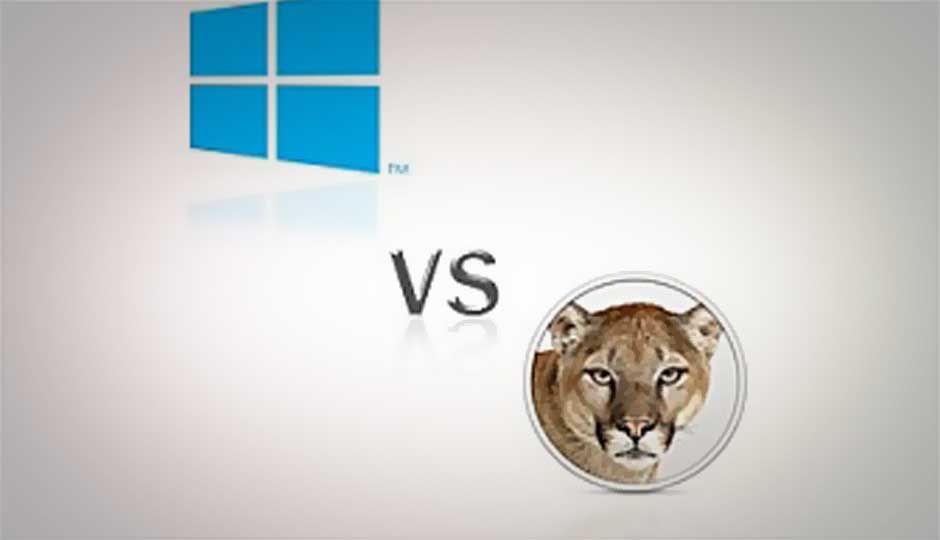 Windows 8 has reached its "release to manufacturing" (RTM) state, and Apple's Mac OS X Mountain Lion has been out for a few months, so now's the time to pit the two new operating systems' performance against each other. Even though each OS is in its final state, there are still a few caveats: the tests were run on an Apple laptop, since it's not feasible to install Mountain Lion on anything but Apple hardware. This means that Apple gets the advantage of tuning the OS precisely to the hardware configuration. Windows, by comparison, must run on a huge array of different hardware combinations from many vendors.

I tested by installing 64-bit Windows 8 RTM on a 13-inch MacBook Pro (a 2012 2.9GHz Core i7 with 8GB RAM) using Boot Camp. The setup process was pretty smooth, though I'd imagine that not all the Windows hardware drivers were perfectly tuned for the MacBook. Nevertheless, the system was snappy and responsive running Windows 8. And as you'll see in the results below, the emerging OS can hold its head high on several measures of performance.

One of the most important gauges of speed in a computer is how long it takes to start up and be ready. This is probably one of the main reasons the iPad is so successful—it's just there and ready to go, no need to wait for a boot process, usually. Not quite as critical, but nevertheless important is the time it takes the computer to shut down. I tested start by timing from the click of the disk boot choice to a functional home screen, with no wait spinner spinning.

For shutdown, I started the timer at the moment of hitting the Shut Down choice, and stopped it when the laptop's fans went silent. I went through iterations for each, throwing out the high and low results and averaging the remaining five. The surprise here is that Windows 8 starts up significantly faster on a MacBook than OS X Mountain Lion does, though the latter shuts down in half the time of Windows 8. But note that hitting the power button puts Windows 8 into sleep mode, which happens pretty much instantly.

A popular app used in both OSes is Apple's iTunes, and I used this to measure how long ripping a CD (Buena Vista Social Club, to be exact) took in each OS. This test didn't show much difference between the two OSes, with Lion coming in a scant 5 seconds quicker. It took Windows 8 3:47 to rip the 60-minute disc to 256Kbps M4A tracks, while Lion took 3:42. This one is pretty much a wash, though OS X gets a tiny advantage.

Geekbench 2.3, from Primate Labs, is a cross-platform benchmark that runs a series of geeky tests like prime number, Mandelbrot, blowfish encryption, text compression, image sharpen and blur, and memory stream test. The subtests comprise both single- and multithreaded applications. The results are normalized so that a score of 1,000 is the score a Power Mac G5 1.6GHz, so a higher number is better.

I ran both the 32-bit and 64-bit tests in Geekbench three times and took the average for each OS. Though it's mostly designed to test hardware, it can at least show us whether the OS is getting in the way of accessing the hardware quickly. The result for this benchmark surprised me, with Windows 8 in 64-bit mode taking the crown, delivering a score of 10068 compared with Mountain Lion's 8706. In the 32-bit version of the test Mac OS S Mountain Lion was actually a bit faster, with a score of 7918 compared with 7549 for Windows 8.

To test with a few popular Web browser benchmarks, I installed Mozilla Firefox on both operating systems so that the browser engine would be less likely to determine the results. But since a case could be made for using the OS's native browser, I ran the benchmarks in Safari on OS X Mountain Lion and Internet Explorer 10 in Windows 8, too.

The SunSpider JavaScript benchmark is a heavily used measure of a browser's JavaScript performance, put out by the WebKit organization, which, by the way, makes the rendering engine for Apple's Safari. Results on this test was comparable with all setups, hovering in the high 150s—with one big exception: It was significantly faster on Internet Explorer under Windows 8, which consistently delivered results closer to 100 milliseconds.

Mozilla's Kraken 1.1 is another JavaScript benchmark, which the open-source browser maker says represents a more realistic workload. Both OSes were close when running Firefox, with a slight advantage to Windows 8. But when running the native browsers, Windows 8's IE10 fell far behind Mountain Lion's Safari 6.

A final browser benchmark, Psychedelic Browsing, from Microsoft's IE Testdrive site, is designed to test graphics hardware acceleration of Web content. Microsoft has done a ton of work on this acceleration technology, and it shows in the results, using both Firefox and the native browsers.

For this one, I took a folder containing 20 files weighing in at 636MB, and simply timed how long it took to copy it from a fast USB thumb drive (a 16GB Corsair Flash Voyager GT) to the MacBook running Windows 8 and then Mountain Lion. As when I compared Windows 7 with Windows 8, the operation took a few seconds longer in Windows 8. A Microsoft representative explained to me that this is because "in Windows 8, each file transfer is scanned to ensure there is no malicious code, which takes a little longer but is a better and safer experience for users."

This is hardly an exhaustive comparison of every kind of performance measurement you could want to compare operating systems. And indeed with (in most cases) different software running on each, it's hard to make direct, apples-to-apples comparisons. But the results do show that, say what you like about features and interface, Windows 8 can hold its head high next to Apple's newest desktop operating system when it comes to performance. In particular, I was impressed with how quickly Windows 8 started up on my test MacBook, and with its remarkably faster Geekbench (64-bit) and SunSpider (in IE10) performances. And anecdotally, Windows 8 feels snappy. Speed is one thing you won't have to worry about with Microsoft's next big operating system.

Mountain Lion, as you'd expect, doesn't feel like any kind of slouch running on a Core i7 MacBook, either. And you could argue that you'd expect the rich environment of OS X to require more processing than the primary-color simple interface of Windows 8. This is especially true for startup, which has to load more of the rich OS's features. Mountain Lion's shutdown time is half that of Windows 8 running on the same machine, and on an independent JavaScript benchmark, Mozilla Kraken, its Safari browser beats Windows 8's IE10. Finally, Mountain Lion's faster file-transfer time will be magnified for truly large amounts of data, too.

Windows 11 has started showing ads when you sign out
Apple iOS 16.2 update to bring 5G support to iPhones in India
Funtouch OS 13 announced for Vivo and iQOO devices: Top features and rollout roadmap
Google Chrome is ending support for Windows 7 and 8.1 soon: What you need to know
Apple to reportedly bring iOS 16 features to iPadOS soon
Advertisements