Here's how Google is putting AI to work in healthcare, environmental conservation, agriculture and more 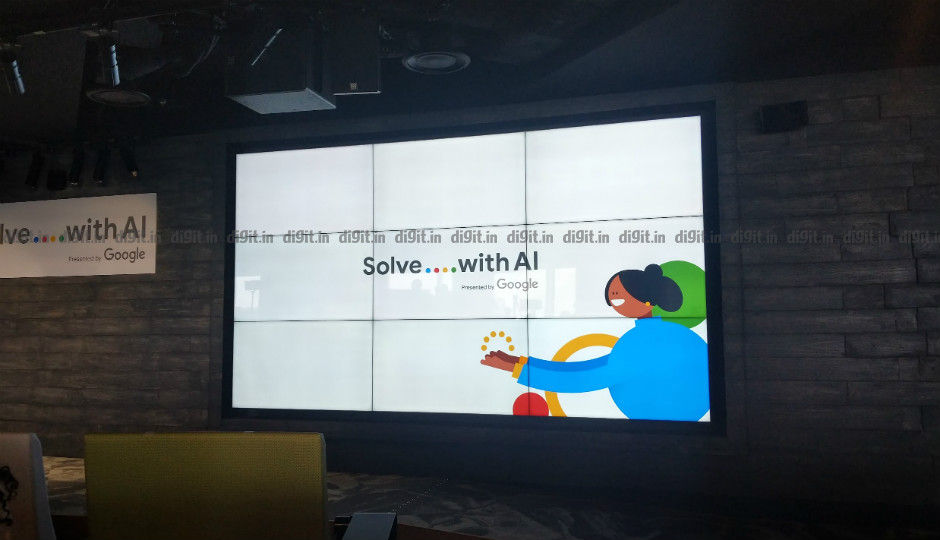 Earlier this year, Microsoft had invited us to its Bengaluru campus for a two-day briefing on how it's incorporating artificial intelligence (AI) in many of its business solutions, including Azure, Power BI, Teams, and Office 365. In addition to letting a few of its business partners explain how these AI-enabled services help them, the Redmond-based software giant had demonstrated its Garage-developed apps such as Kaizala, Seeing AI, and Soundscape.

In a style quite similar to Microsoft's, Google invited us to its Roppongi Hills office in Tokyo for a one-day briefing titled, “Solve… with AI” earlier this week. The briefing was headed by Jeff Dean, a Senior Fellow and AI Lead at Google. While Microsoft's briefing on AI mostly revolved around solutions that tackle IT business challenges, Google's briefing addressed solutions aimed towards the “social good”. Product leads from Google AI explained how the company's technology is being put to use in areas like healthcare, environmental conservation, agriculture, and others. Google invited a few of its business partners to add inputs and examples during the briefing.

The briefing began with Dean delivering the keynote address in which he explained the basics of machine learning (ML), which is a subset of AI that involves training a computer to recognise patterns by example, rather than programming it with specific rules. He explained how neural networks can be trained to identify patterns that are either too vast or complex for humans with the use of relatively simple mathematical functions. ML models are developed for this purpose.

Dean used the example of an air quality monitoring tool called Air Cognizer to demonstrate how TensorFlow is used in everyday mobile app development. Air Cognizer is an app developed in India as part of Celestini Project India 2018. It can help detect the air quality level of the surrounding area by scanning a picture taken through the Android device’s camera. Dean went on to say that that was only one such example of developers and researchers using Google’s machine learning tools to create AI-enabled apps and services. After Dean’s introduction, other Google AI team leaders took the stage one by one to talk about other areas in which Google’s ML efforts are making a difference. 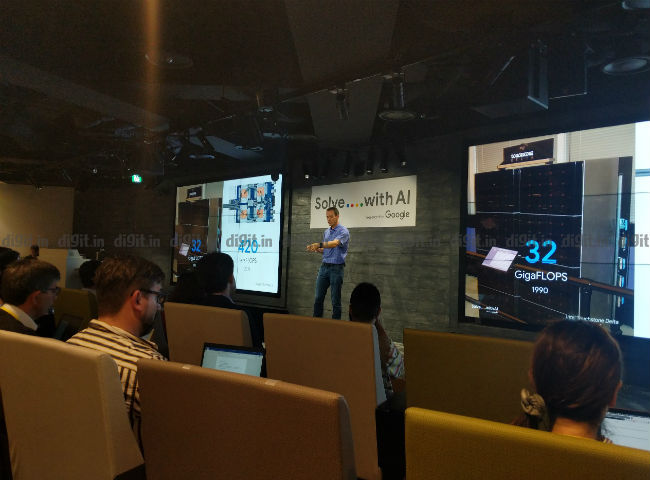 Lily Peng, Product Manager for Google Health, came on stage after Dean's introduction to talk about how Google's AI ventures help in the field of healthcare. “We believe that technology can have a big impact in medicine, helping democratize access to care, returning attention to patients and helping researchers make scientific discoveries,” she said during her presentation. She supported her statement by citing three specific areas in which Google's ML models are seeing success: lung cancer screening, breast cancer metastases detection, and diabetic eye disease detection.

Google's ML model can, according to the company, analyse CT scans and predict lung malignancies in cancer screening tests. In the tests conducted by Google, the company's model detected 5 percent more cancer cases, thereby reducing false positives by over 11 percent compared to radiologists. According to Google, early diagnosis can go a long way in treating the deadly disease but over 80 percent of lung cancers are not caught early.

In breast cancer metastases detection, Google says its ML model can find 95 percent of cancer lesions in pathology images. Google claims that pathologists can generally only detect 73 percent of cancer lesions. Its model can scan medical slides better, which are each up to 10 GigaPixels in size. Google says it's also more successful in detecting false positives than doctors. Google says that it has found that the combination of pathologists and AI was more accurate than either alone.

Google says that, with the help of its sister company Verily, it's becoming increasingly more successful in treating diabetic retinopathy. The company is currently piloting the use of its ML model for detection of cases of diabetic retinopathy in India and Thailand. Google believes that there's a shortage of doctors and special equipment in many places, which is one of the reasons the disease isn't caught early, leading to lifelong blindness amongst patients. 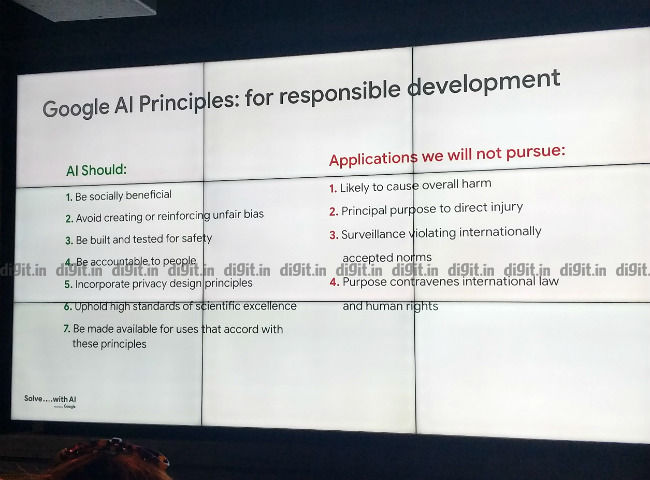 Julie Cattiau, a Product Manager at Google AI, explained how wildlife on the planet has decreased by 58 percent in the past half a century. According to her, Google's AI technology is currently helping conservationists track the sound of humpback whales, an at-risk marine species, in order to prevent losing them altogether to extinction. In one bioacoustics project, Google has apparently partnered with NOAA (National Oceanic and Atmospheric Administration), which has collected over 19 years worth of underwater audio data so far.

Google says that it was able to train its neural network (or “whale classifier”) to identify the call of a humpback whale within that 19-year-long audio data set. During her presentation, Cattiau said that this was a big challenge for the researchers partly because the sound of a humpback whale can easily be mistaken for that of another type of whale or ships passing by. Google believes that its AI technology was successful and helpful in the project as listening for the call of a whale in a data set that vast is a task that would take a human being an inordinate amount of time to complete.

Topher White, the CEO of Rainforest Connection, was one of the many partners invited by Google to participate in the briefing. With the use of a proprietary technology, Rainforest Connection prevents illegal deforestation by listening for sounds of chainsaws and logging trucks in rainforests across ten countries and alerting local authorities. Its technology involves the use of refurbished solar-charged Android smartphones that use Google TensorFlow to analyse the auditory data in real-time from within a rainforest. According to White, deforestation is a bigger cause of climate change than pollution caused by vehicles.

Febriadi Pratama, the Co-Founder of Gringgo Indonesia Foundation, was another one of the many partners invited by Google for the briefing. The foundation, which is a recipient of the Google AI Impact Challenge, is currently using Google's ML models to identify types of waste material using image recognition in the Indonesian city of Denpasar. Pratama said during his speech that the project was effectively helping the foundation rake up plastic in a city where there's no formal system for waste management.

Raghu Dharmaraju, Vice President of Products & Programs at the Wadhwani Institute for Artificial Intelligence, was also one of the partners invited by Google to participate in the briefing. The institute uses a proprietary Android app along with pheromone traps to scan samples of crops for signs of pests, which, in a large farm in India, can potentially wreck a farmer's harvest. The app uses ML models developed by Google. In his presentation, Dharmaraju said that the solution developed by the institute was notably effective in detecting pink bollworms in cotton crops in India.

Sella Nevo, a Software Engineering Manager at Google AI, took the stage to talk about the company's flood forecasting initiative. According to him, dated, low-resolution elevation maps make it hard to predict floods in any given area. SRTM, the provider of elevation maps, hands out data that's nearly two decades old, he said during his presentation. In a pilot project started last year in Patna, Google was able to produce high-definition elevation maps using its ML models with the help of data taken from satellites and other sources in order to forecast floods. It was then able to alert its users about a flood incident in Gandhi Ghat. The flood alert was sent out as a notification on smartphones.

“The number one issue is access to data, and we have tried to tackle that. With different types of data, we find different solutions. So, for the elevation maps, the data just doesn't exist. So we worked on different algorithms to produce and create that data for stream gauge measurements. For various satellite data, we purchased and aggregated most of it,” Nevo told us in an interview. According to him, Google is trying to produce elevation maps that can be updated every year, unlike the ones given out by SRTM. 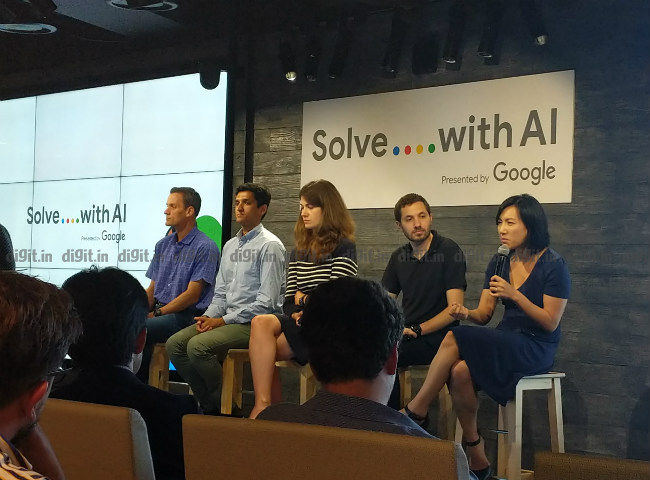 Sagar Savla, a Product Manager at Google AI, took the stage to talk about Google's Live Transcribe app. Available in 70 languages currently, the app helps the deaf and hard-of-hearing communicate with others by transcribing speech in the real world to on-screen text. The app is developed using Google's ML models to ensure precision in its transcription. For example, the app can tell whether the user means to say “New Jersey” or “a new jersey” depending on the context of the sentence. Talking about the app and its development, Savla said that he had used it with his grandmother, who, despite being hard of hearing, was able to join in on the conversation using the Live Transcribe app in Gujarati.

Julie Cattiau returned to the stage to talk about Project Euphonia, a Google initiative dedicated to building speech models that are trained to understand people with impaired speech. The initiative could in the future combine speech with computer vision, she said during her presentation. For example, people who suffer from speech impairments caused by neurological conditions could use gestures such as blinking to communicate with others. Cattiau said that the company's ML models are currently being trained to recognise more gestures.

Tarin Clanuwat, a Project Researcher at the ROIS-DS Center for Open Data in the Humanities, went on stage about an ancient cursive Japanese script called Kuzushiji. Although there are millions of books and over a billion historical documents recorded in Kuzushiji, less than 0.01 percent of the population can read it fluently today, she said during her presentation. She fears that this cultural heritage is currently at risk of becoming inaccessible in the future owing to disuse in modern texts.

Google says that Turin and her fellow researchers trained an ML model to recognise Kuzushiji characters and transcribe them into modern Japanese. According to Google, the model takes approximately two seconds to transcribe an entire page and roughly an hour to transcribe an entire book. According to test data, the model is currently capable of detecting about 2,300 character types with an average accuracy of 85 percent. Turin and her team are working towards improving the model in order to preserve the cultural heritage captured in Kuzushiji texts.

Google seems convinced it’s headed in the right direction when it comes to applying machine learning the right way for social causes. In the future, we can expect Google to take on more such projects, where neural networks are trained to understand data sets that hold keys and clues to hitherto insoluble problems in areas never tried before. At the same time, more and more developers and researchers should be able to incorporate Google’s open-source TensorFlow library in their projects as long as Google continues to provide support and reference material for it.

Top iOS 16 Features: Improved Lock Screen, Notification System, And A Lot More
Twitter Circle Now Available For All: Here Is How To Use It
Microsoft Store Is The Big Winner Of The Build 2022 Developer Conference
The Indian Government wants Apple users to update their devices due to security concerns: Here are the details
Microsoft is bringing a search bar to the Windows 11 desktop
Advertisements