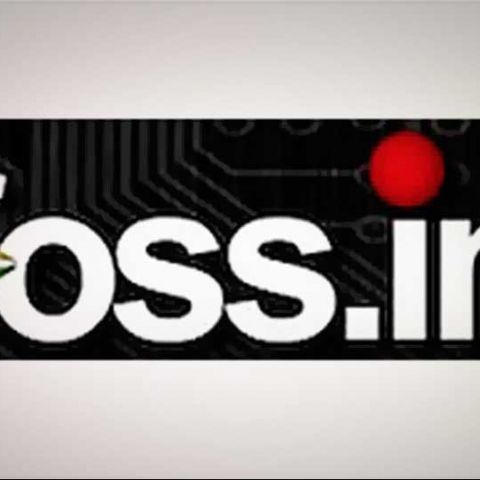 About a week ago, Foss.in, India’s largest free and open source conference completed another successful year in the running. If you weren’t there at the event, then read our day-by-day round up of the proceedings to catch-up.

Day 1:
The first day of the event started with a buzz that you’d expect from something of this magnitude. Atul Chitnis kicked off the proceedings with the customary welcome, and introduced everyone to digital extravaganza that awaited everyone. By his own admission, he was not his energetic himself at the time, but told us to not go into that. So there you have it, Mr. Chitnis, we won’t go into that. But what we would go into, was the impressive array of talks that awaited us. The array of topics picked were impressive, to say the least, and in keeping with the demands of the modern day.

Things kicked off with what we thought was among the best introductory sessions on what is a promising technology – “Building Web-apps with Node.js” presented by Shiju Varghese. He went over all the required bases to introduce the crowd to this technology, complete with a demo application that he built using the platform. The general crowd was very amused. We then moved to what was a very important breakdown of the Wikipedia initiative -- “Wikidata: A foundation to build your apps on” by Lydia Pintscher. She got the community in the know about Wikidata, the latest addition the the Wikimedia foundation stable, and gave a basic working idea of the lofty plans that the project hopes to implement, including multi-lingual and machine readable entries which would be accessible by direct APIs, right from the current Wikipedia architecture.

The proceedings then moved on to a tutorial on C 11 – the new standard released by developers for the legendary programming language. It was hosted by Ulrich Drepper, a rockstar developer if there ever was one. He kept everything simple and yet interesting, keeping the crowd in their feet with cross questioning sessions at set intervals. Things then moved from technical to intellectual, as the first Hackernote (as Mr. Chitnis likes to call it) was presented on “How open source software has upended art”. Gene Kogan had some great insights on the topic, and really got the crowd thinking deep and hard about the issue, and taking pride in the fact that they were a part of it.

Things kicked off with the welcome note.

Day 2:
Retrospectively, the second day was much slower in pace. But that was probably be expected, considering how hectic the previous day was. Digit first visited the talk on “Scalable Parallel Programming Techniques”, given by Mr. Drepper. And, as always, he was his usual expressive self. The talk was well presented, and covered the nuances of parallel computing very well. We were then in attendance at “DNS SEC @ Mozilla”, which is basically a huge acronym for Domain Name System Security Extensions, and was given by Shyam Mani. Now, of course, browser developers of such fame as Mozilla would be expected to be pretty knowledgeable in the field, and they indeed were. The material presented was hugely impressive.

The final talk before lunch was given by Lennart Poettering, who is a name that most open source enthusiasts would be aware of. He was speaking on one of his own pioneering developments, “systemd as the Core OS”. Oh, and we must mention the lunch too, and not only because it was free. The palette presented was a delicious mixture of cuisines from all over the country, really emphasising the ‘(dot) in’ in “foss.in”. The all-time availability of coffee didn’t hurt either. Post lunch, we thought of feeding our appetite for the latest in open source space, and first in line was an introduction to a project that we have been following for some time – the Firefox OS. Although the talk did not cover much other than what is already being speculated, it is always good to hear from the source itself, which in this case was Mr. Ben Koro of Mozilla.

In keeping with the theme of popular open source, we then moved on to a KDE conference organized by what was a very active caravan of the KDE banner. We were happily reminded that the project was pushing for inclusion on multiple fronts, not least a ‘github-killer’, so to speak. More on that later. Finally we got to see a presentation about a project that can easily “make us full of pride” as Indians – the Aakash tablet. Teased with an encouraging overview of the project, we decided to hit the stall that had been set up in the hall area by the Aakash team from IITB, and we have to say that this is promising but not nearly flawless (for once, forget about the actual ‘made-in-China’ tag). Finally, Mr. Drepper brought the day’s proceedings to an end, with a talk on the importance of the knowledge of hardware for what is a very software-minded community.

Day 3:
The final day was a good transition between the geek-fest and the real world. We kicked off by attending a talk on Open Data, presented by two entrepreneurs, Gora Mohanty and Satish. Gora is one of the founders of a company called Fieldata, which aims to help NGO organizations with making their data instantly available on the cloud with their web-app solution. Satish, on the other hand, has founded Mobilitas, a startup that aims to create the go-to app in the medical sector, which can store the complete medical records of the patient in question, and integrate it with the current healthcare system. In what was a very promising initiative by both of the firms, we found that both of them had the potential to positively impact their respective fields in a big way.

We then decided to check out the community “Hacking Area”, hoping to find some interesting projects that these rebels were up to (rebels as in, the non-attendees to all the talks). And , we were not disappointed. First up was a robot that had captured everybody’s attention, which was being created right in the centre of the hacking area, for all the community to see. The creators, who are friends from various fields of computing (and interestingly, none from a proper robotics background), told us that they’d actually built a very competent model for the previous two days, but the person tasked with keeping the model safe, decided to not show up at all. While the project was being safeguarded at Sudar Muthu’s house, the rest of the Computer Club of India’s team – Vijay, Anil, Anant and Chintan, took it upon themselves to build a new one from scratch, and they indeed build one. Also of note was a very interesting piece of software by Mr. Srivats P – A networking professional by day, he decided to pursue his interest in software development, and happily embraced the open source community for that. The result is ‘Ostinato’, an application that lets you inject any kind of network packet, containing any data that you want, into any network of your choice, provided that you have a stable connection in place. Neat stuff, that.

Other than these two, most of the tables were occupied by students, many of whom were working on their academic projects. Not that it is any less important – the entire open source world was basically set up by inspired university students. In the evening, there was a general discussion on open source and its related issues. Finally, there was the adieu-talk presented by Mr. Chitnis, where he did not say goodbye as much as he sent out invitations for next year’s “foss” meet-up. The crowd was then treated with the mind-reading presence of magician Mr. Nakul Shenoy. Finally, everybody gathered for a performance by the up-and-coming rock group Lagori.

If all of this interests you, then there is a special surprise in store for you. Every action that we just described, and more, was streamed live on hasgeek.tv, and videos from the event have been made available now. So you can check out if we’re lying, at the foss.in section on hasgeek.tv!