App of the Week: Firefox ProfileManager 1.0

If you are a Firefox user, there is one nice feature that you should know about, Profiles. Firefox allows users to create multiple profiles, each of which has its own history, bookmarks, settings and even add-ons.

This can be of considerable use if multiple people use Firefox on the same computer and account, and if you use Firefox in different ways. If you are a web developer and use Firefox, you probably have a number of add-ons related to web development installed, however they might not be as useful during casual browsing.

Unfortunately the profile feature isn’t as visible as it could be. You need to launch Firefox with a special command line parameter in order to even show it. Currently if you launch Firefox with a ”-P” dialog, it will show the list of profiles, and allow you to create, rename and delete profiles. You can opt to have the profile manager show up each time Firefox is launched.

There are a number of features this new Profile Manager can provide since it is a standalone application. Firstly, it can manage multiple versions of Firefox and it can manage even non-Firefox, but Firefox-based applications such as Thunderbird. This is incredibly useful since now Firefox has multiple channels, release, beta, aurora, and nightly.

This profile manager application can associate a profiles with specific version of Firefox. When the profile is selected and launched, it will then launch using that version of Firefox — although you can still quickly change this while launching. If you run pre-release versions of Firefox, this is a nifty way to keep your main profile safe. You can always keep your profiles in sync using Firefox sync if you want to. 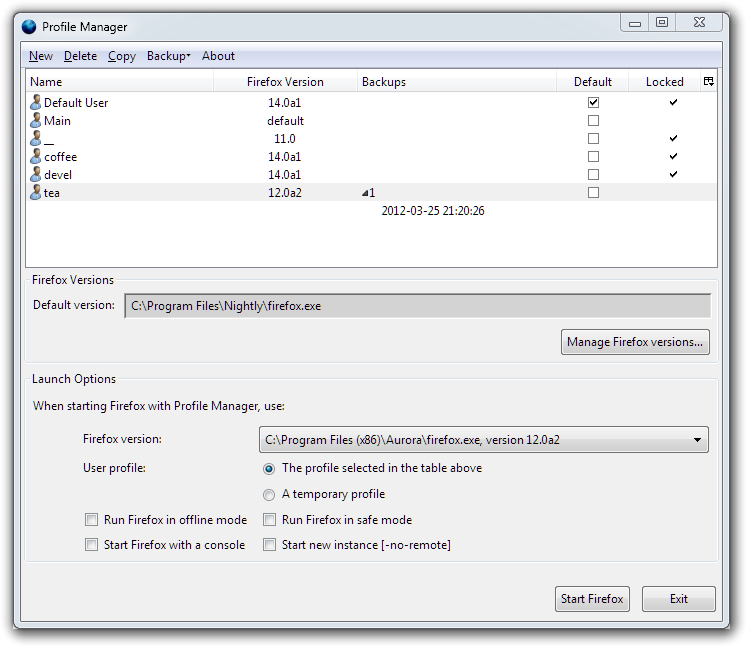 You can also set a default version of Firefox, which will automatically be used for all profiles where you haven’t specified a version of Firefox to launch with. Also, you can select a default profile; this profile will automatically be selected when you launch the application, so you can quickly click the Start Firefox button and launch the default profile.

The Profile Manager can also optionally launch Firefox with a temporary profile that will be discarded later on.

There are also a number of other features and options that the Profile Manager offers. For one, you can now copy, or clone profiles. This makes a new profile will all the data of the first one intact. You can also back up profiles; you can back up to a folder or a zip file. Folder-based backups can be managed directly from within the interface; you will see a list of previous backups and can restore them.

Another useful feature that the Profile Manager is that it can detect if Firefox is running, and automatically launch Firefox in multiple-instance mode in that case. Normally launching Firefox multiple times will just open a new window of the currently-running version of Firefox. If you want to run multiple versions of Firefox in parallel with each other, each of them needs to be running under a different profile. You also need to add a special command line parameter ”—no-remote” while launching Firefox. The Profile Manager will automatically handle all this for you, so if it detects that a profile is already in use, it will warn you, and if you launch another profile while on is in use, it will add this parameter automatically.

The Profile Manager can also run Firefox in safe mode, where all add-ons are customizations are disabled. Useful if Firefox is crashing a lot and you don’t know which add-on is responsible, or know which one is but just need to launch Firefox to disable it.

The Firefox Profile Manger can be downloaded for your platform from here . You do not need to install it, just extract it to a folder of your choice and run the profilemanger.exe application.