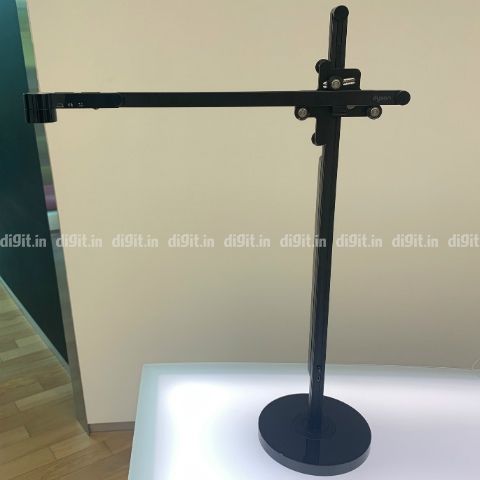 At Rs 39,900, the Dyson Lightcycle is an impressive, but niche product only for those who really want a precision light and are ready to pay top dollar for it.

Dyson launched the Lightcycle amidst much fanfare at an event in Singapore. The company took me to their R&D centre and made me meet a bunch of engineers who designed this desk lamp. On experiencing it for the first time, I found the Lightcycle to be an absolute winner for creators and creators alone. People who work with small tools, artists who have to create intricate designs, and other such precision workers would be very happy with the Lightcycle because it does not produce any shadows and can be swiveled around for ease of placement. However, when Dyson announced the price of the LED light, my first impression was that it is the Apple of all desk lamps. At Rs 39,900, the Dyson Lightcycle is one of the most expensive desk lamps out there. Dyson markets the Lightcycle as a lifestyle product that can be placed not only on your desk, but also on your bedside, your drawing room and essentially any area in your home/office that needs a light. When Dyson sent me a unit of the Lightcycle for review, I used it as a bedside lamp. Here’s my review:

One of the reasons I used the Lightcycle as a bedside lamp is because I like to be able to switch colour temperature and brightness as the day passes by -- Cool white in the day time and warm in the evenings. The Lightcycle’s touch controls let me do that easily. The brightness on the task light ranges from 100 to 1,000 Lux and the colour temperature can be adjusted from 2,700 Kelvin to 6,500 Kelvin. The job can be done either through the touch controls on the lamp itself or through the Dyson Link app. Maximum brightness in ‘Boost Mode’ can be achieved only through the app. However, in the time I spent using the Lightcycle as my daily bedside light source, I found myself almost never using the app. I have found this to be the case even for products like connected fans. You want to be able to turn a light on/off instantly and not spend an extra 30-40 seconds opening up an app. I would have used the app to define colour temperature and brightness, or use the available presets for different moods, had the controls for the same been absent from the device itself. But since I had access to the touch bars on the Lightcycle, I found myself using just those. I feel Dyson could have saved on the R&D cost for the app part of the Lightcycle and transferred that cut to the consumer. Meanwhile, the app and its presets work just fine. It’s not an internet connected light, meaning you cannot turn it on and off sitting in a remote location. The Lightcycle connects to the smartphone app (Android and iOS) using Bluetooth 4.0 so you have to be in the proximity of the light to use the app. 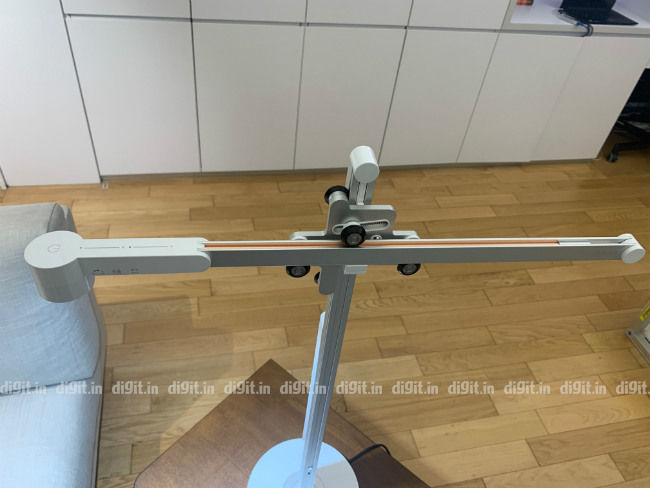 The best feature of the Lightcycle is the ability to swivel it around and adjust the height, extension of the horizontal bar that holds the LED cluster. It can be easily pulled closer, pushed away or moved up/down to suit different situations. For instance, I would pull it closer while reading a book and push it further away while watching something on my laptop. 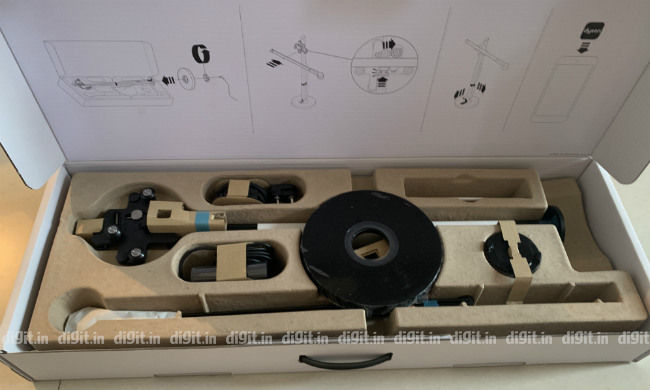 The Lightcycle does not come pre-assembled and you have to attach both the stem and the horizontal LED bar to the circular base yourself. An instruction manual is included in the box and it’s pretty straightforward to follow. It took me about 10 minutes to assemble the whole thing. My only mistake was that I assembled it in a different room from where I intended to place it. Once assembled, the Lightcycle is not lightweight. On the contrary, it’s pretty heavy to carry so I advise users to assemble it where they intent to place it. It was a workout to move the light everytime I wanted to clean under the base, which was everyday since homes in India are prone to dust accumulation.

As I said before, the Lightcycle is meant for precision work. You cannot expect the device to fill up the whole room like a regular wall-mounted lightbulb. While the Lightcycle will provide sufficient light for you to move around in a dark room, the light is concentrated in the area where the lamp is placed.

The colour temperature and brightness moves smoothly from cool to warm and bright to dim. No complaints there. The LEDs do not heat up excessively and that’s because Dyson uses a water vapors cooling technology within a copper pipe that runs from the LED enclosure to the end of the long upper stem. You can easily touch the LED enclosure and not feel any excessive heat, but running the Lightcycle for 3-4 hours at a stretch causes the copper pipe and the upper stem to heat up a bit more than normal. It won’t burn your fingers, but could be uncomfortable to touch for children. Then again, in regular usage, you probably wouldn’t find yourself needing to touch the copper tube since the stem can be pulled and pushed from the two ends. 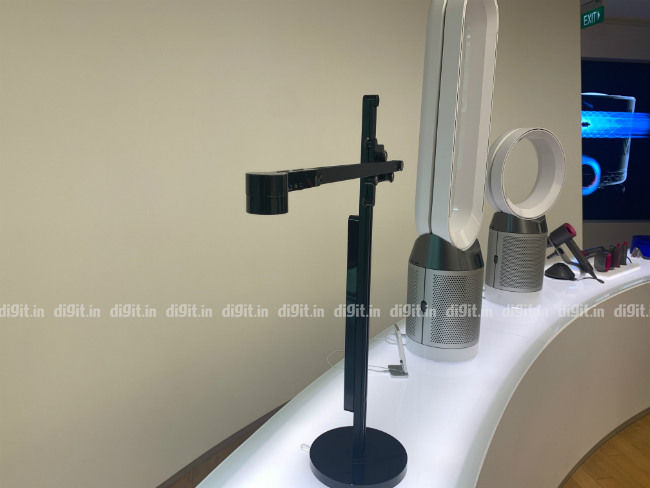 The Lightcycle also features daylight tracking to adjust the brightness and temperature of the LEDs matching the sun’s cycle in your location. While this is a great feature, to me, it’s over engineering at its best for something you wouldn’t need. It’s very uncommon to keep a light switched on the entire day, especially if your workspace or home has abundant natural light. So tracking the movement of the sun and changing the light temperature, intensity throughout the day becomes redundant. There’s also a proximity sensor on the Lightcycle which adjusts intensity as the light is pulled or pushed vertically, to make it come closer to a surface or move it further away. In my testing, the proximity sensor only works if the unit is placed on a plain surface and not when objects are presented closer or further away from it. 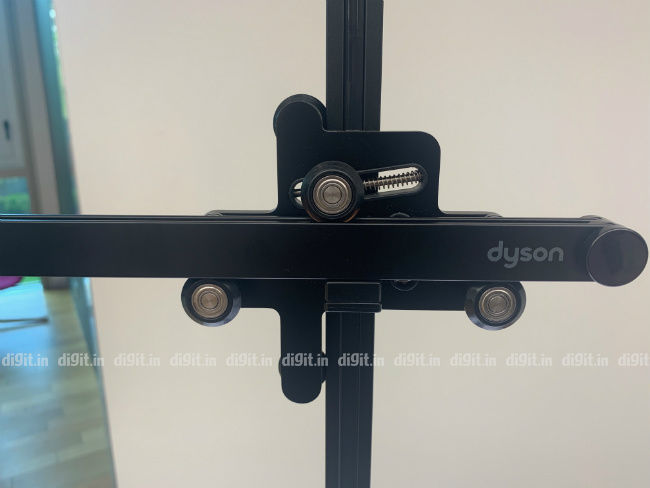 The Lightcycle is an impressively designed piece of equipment. It is definitely a conversation starter and attracts a lot of attention because of its sleek looks and rotatable frame. It is best suited for the modern workspace and doesn’t really blend well with ethenic or more traditional India decor. If you’re more into minimalistic decor and clean lines, then the Dyson Lightcycle will make for a good visual addition to your space. It is available in White/Silver and Black colour variants, both of which look and feel premium. If you’re paying top dollar, you are getting a good-looking device, a philosophy Dyson sticks to for all its products, including its vacuum cleaners, air purifiers, hair dryers and stylers.

The Dyson Lightcyle is definitely a guilty buy. It’s well designed, works as advertised for the most part and is great for precision tasks, while being easy on the eyes with its adjustable colour temperature settings. However, It is very tough to recommend a Rs 39,900 LED lamp, especially with many cheaper alternatives available in the market for regular use. I can imagine someone like Jony Ive putting the Lightcycle up in his workspace, but I don’t see it becoming a common sight in every home or office.