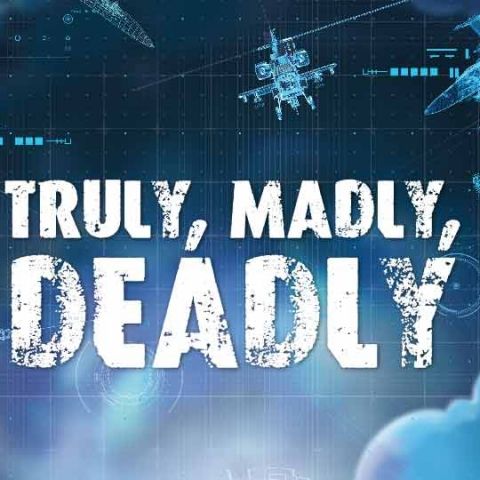 Some of them will literally blow you away

The drumroll of war is beating hard from all directions. Look around you, and you’ll see. There’s a heightening of rhetoric and extreme posturing between nation states around the world. Armament acquisition is on the rise, defence spending is at an all-time high and everyone seems on the edge. It seems like a schoolyard standoff, where two bullies are calling each other names, provoking the other one to throw the first punch, while friends (and general onlookers) surround them with bated breath, unsure of what will happen. But alas, the standoff amidst nation states isn’t so harmless, and if unresolved can have far-reaching consequences.

Why? Because the instruments of war have evolved drastically from what we read about them through the pages of history, as they are far more destructive than ever before. It’s alarmingly shocking how much power just a minor click of a button holds in today’s age. It’s possible to not only blow up enemy targets without engaging them directly in the battlefield, but virtually hack into critical enemy infrastructure and disrupt or takedown their defence, financial, corporate systems to wreck serious havoc and unleash mayhem on your target – if you choose to do so.
Welcome to advanced warfare. And this is not a game. Let’s look at the armaments of destruction.

Swarmbots: The biggest substitute to infantry on the battlefield are advanced robot armies that behave like a swarm of insects. Remember Starship Troopers and the swarms of space insects sprawling across unknown planets? Now imagine if all of these insects were actually bots with an impregnable exoskeleton, all controlled by a remote defence station which instructs the swarm of bots to capture a particular enemy territory. These bots can be armed with weapons and be dropped from an aircraft to fly as an army of lethal pests, overrunning a designated territory at speeds of 0.9 Mach – that’s 90 per cent of the speed of sound. Details provided by the US Department of Defense’s Strategic Capabilities Office claims that these swarmbots are capable of operating missions in extreme weather ranging from the sub-zero climes of Alaska to the stroke-inducing heat of dusty Iraq. And it isn’t just air where these swarmbots will operate, as the Department of Defense has carried out tests in fleets of autonomous boats capable of attacking enemy ships. 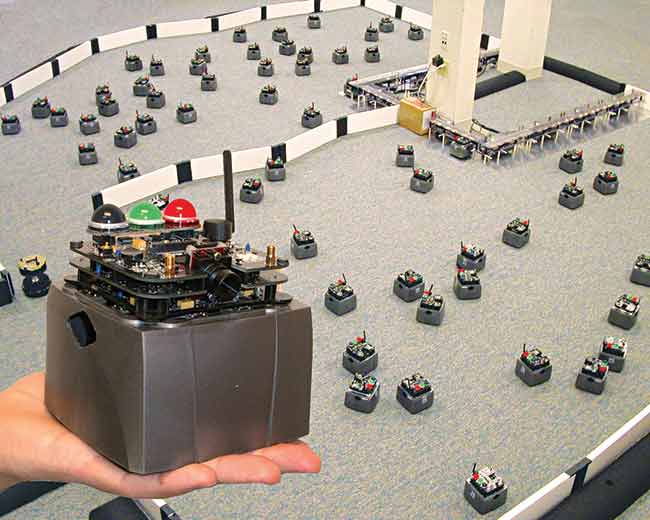 Swarmbots - the future of infantry

Smartbomb: You might have seen clips of indiscriminate carpet bombing of mountainous regions of Afghanistan by US Air Force back in 2004 targeting Al Qaeda operatives, including Osama Bin Laden, who were all crossing over to Pakistan through underground tunnels. Footage of that kind may well be relegated to history books, as smarter targeting technology is ushering in a whole new era of precision guided ammunitions, including surgical strikes. 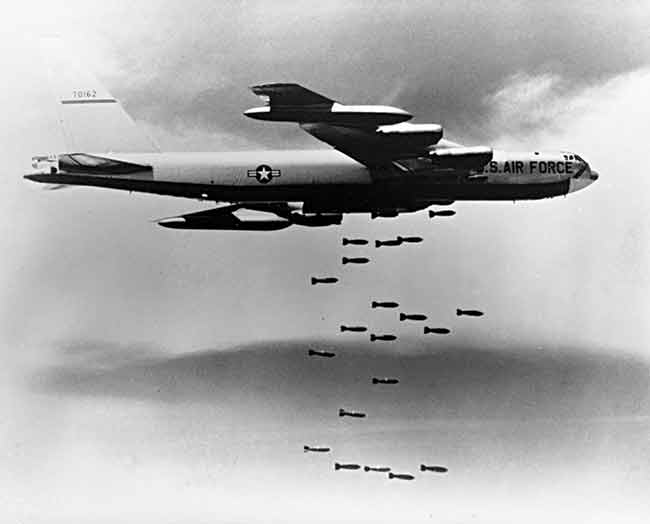 Carpet bombing - a relic of the past

Russia has taken the lead on developing smartbombs that actually work, through a system called as the SVP-24, which can even turn unguided traditional bombs into precision guided weapons that hit the most smallest target areas without causing any collateral damage. Where the Russian system fundamentally differs from the US guided munition kit (to precisely guide bombs to their targets) is that the American kit is attached to the iron bomb itself, while the Russian guidance system is attached to the bomber plane.

The Russian SVP-24 constantly compares position of the target against its own moving aircraft via GLONASS satellite navigation. It also takes into consideration various parameters like pressure, humidity, speed, angle of attack to compute the exact time when the dumb bombs need to be released to bring their free fall trajectory right over the target. The much-costlier, $25,000 per bomb guidance system installed on US bombs, however, have one key advantage over the Russian SVP-24, as it can course correct and re-route itself midair in case of incorrect trajectory at the time of launch.

Railgun: Yes, this is pretty much like the weapon we all used in Quake III Arena, but only much bigger in scale. For starters, railguns currently being developed by BAE Systems for the US Navy need to be mounted on ships – they aren’t yet handheld (I know, right?). The railgun is smaller than a conventional cannon, but it doesn’t need gunpowder or chemical-based propellants to fire itself, depending solely on an electromagnetic pulse that shoots a projectile at 7400 kmph or at Mach 6 speeds, taking just 10 milliseconds to attain that speed. This railgun can accurately hit a target over 100 nautical miles away. 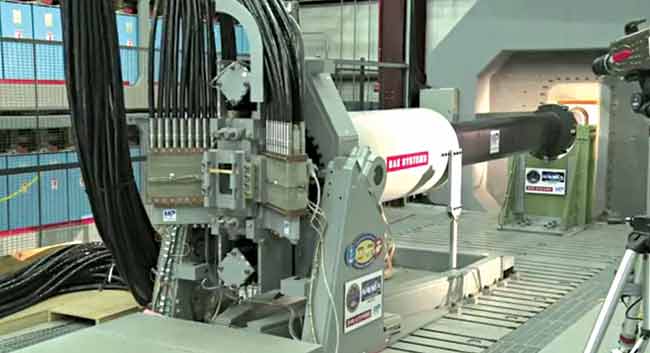 Railgun, something that we have known only in novels and videogames, is now real

Unbelievable, right? But what’s preventing railguns from being fitted onto every US Navy vessel in the near future is this – the 25 MW of power needed to fire these things (that’s enough power to light up 19,000 homes) and the longevity of the railgun itself (it seems firing projectiles at such inhuman speeds can lead to the railgun getting shredded in no time). Can’t have that, of course. But it seems BAE systems are close to solving both these problems, and once they do, it will be hard to see any water-borne enemy escaping from the crosshairs of this highly precise, extremely accurate railgun’s firepower.

Neutron bomb: Like an Atom bomb, which destroys everything in a large area around the target, including living and nonliving structures within its blast radius, a neutron bomb is being hailed as the next big technological leap in global warfare. Why? Because a neutron bomb is essentially a weapon that produces large numbers of neutrons when it explodes (and not heat or blast wave), and it’s, therefore, only harmful to living and breathing organisms, leaving property and structures relatively unscathed. Awesome, right? Because who wants to bomb enemy territory to smithereens, capture it and then spend lots of time and money rebuilding it all? Duh! 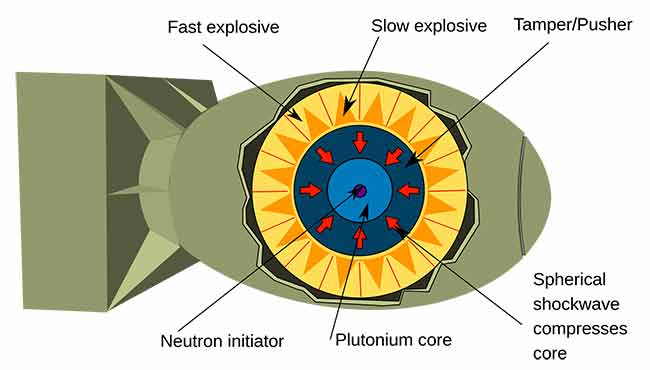 Neutron bomb is the thoughtful version of the atom bomb

There’s no doubt in our mind that the weapons of the future will be more efficient than nuclear weapons when it comes to unleashing deadly strikes against the enemy. According to various reports, research is underway among old superpowers and new on how to unleash hell in just the right measure. For instance, due to the help of certain meteorological weapons it’s possible to alter the weather over a chosen terrain by changing the electric charge present in the air; create artificial rain, droughts or blizzards at the drop of a hat and wreak epic havoc. Tectonic weapons let you create artificial earthquakes with so much power that it can flatten entire towns and cities, and scheduling them will be increasingly easier in the future.

Solar lasers directed by a killer satellite, which can virtually destroy any target on the earth’s surface, aren’t just a figment of someone’s imagination as shown in James Bond’s Die Another Day, but it’s a very real possibility in the war theatre of our future. So is genetic poisoning as the most sure-shot way of destroying a large part of the population, based on a certain genetic code-triggered chemical weapon.

As inevitable as war seems in humanity’s past, present and impending future, let’s hope it isn’t in our time that we get to witness such unfortunate days.