SpaceX’s massive rocket, the Falcon Heavy is finally ready for its first test flight. The rocket is the most powerful operational rocket in the world and is scheduled to launch at February 6, 1:30PM ET, that translates to February 7, 12AM IST. The rocket will take off from Launch Complex 39A, at the Kennedy Space Center, Florida. You can watch the launch live here.

SpaceX notes that the Falcon Heavy has the capability to lift 64 metric tons (64000 Kilos), making it the most powerful operational rocket in the world. The company also says that this is twice the payload capacity of its nearest competitor, the Delta IV Heavy. While this is pretty impressive it still pales in comparison to some Heavy-Lift Launch Vehicles (HLLVs) of the past like the Saturn V rocket. The rocket could carry a payload of 118,000 kilograms and the rocket that formed the backbone of NASA’s Apollo program. The rocket was used in the Apollo 11 mission, which was the first mission to land humans on the Moon. However, the Falcon Heavy is designed to do something no other HLLV has done before. Be reused.

Like most rockets in use, the Falcon Heavy is a multi-stage rocket. The first stage of the rocket is made up of three cores with a total of 27 Merlin engines that can generate 22,819 Kilonewtons of thrust. By comparison, the liftoff thrust of the rocket is approximately equal to eighteen Boeing 747 aircraft at full power. For an even greater perspective, each core is equivalent to the first stage of SpaceX’s Falcon 9 rocket which is already in use. The two side cores then attempt to land at SpaceX’s Landing Zones 1 and 2 at Cape Canaveral Air Force Station in Florida. In order to showcase the fact the cores really are reusable, both side cores have been used once. As for the center core, that will attempt to land on the wonderfully named “Of Course I Still Love You” droneship stationed at in the Atlantic Ocean.

Shortly after takeoff, the central core is throttled down till the side cores separate. After separation, the center core is then throttled back up to full thrust. SpaceX notes that the second stage is pretty similar to the current Falcon 9. The engine shuts off , and the first-stage cores separate. The engine can also be restarted multiple times to place payloads in a variety of  orbits.

This particular launch is a demonstration, and as such the payload isn’t a state-of-the-art satellite or even steel/concrete mass simulators, but rather a Tesla Roadster. In fact, it’s Elon Musk’s own midnight-cherry coloured Tesla Roadster. Why? Because it’s “something fun” according to the company’s mission overview. The Falcon Heavy will attempt to place the car in into a precessing Earth-Mars elliptical orbit around the sun.  As Popular Mechanics notes, this orbit would mean that it would go around the sun, but would also come close to Mars and Earth. 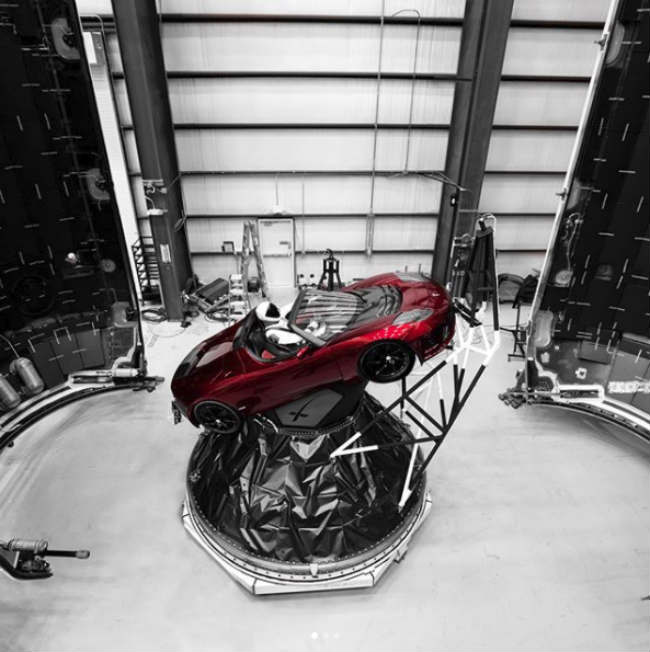 “It’s important to remember that this mission is a test flight. Even if we do not complete all of the experimental milestones that are being attempted during this test, we will still be gathering critical data throughout the mission. Ultimately, a successful demonstration mission will be measured by the quality of information we can gather to improve the launch vehicle for our existing and future customers,” the company notes in its mission overview.

In an interview with Ars Technica, Musk noted that the launch has a 50-50 chance of success. He noted that his biggest concern was booster-to-booster interaction. Since these rockets are very flexible, movement in one rocket could impact others.

Like the Falcon 9, the Falcon Heavy is open for commercial services at $90 Million. However, the company notes that the rocket was designed from the outset to carry humans to space and opens up the possibility of flying missions with crew to the Moon or even Mars.

Elon Musk's Starlink satellite internet will target rural districts in India
Elon Musk's Starlink Satellite Internet Service by SpaceX could launch in India soon
Scientists have developed the world’s first living robots, bringing us one step closer to a sci-fi future
A huge asteroid is moving toward Earth's orbital path
NASA to equip ISS crew with Augmented and Virtual Reality tech to help with repairs and maintenance in space
Advertisements