The evolution of surgery: From bloodletting to robots 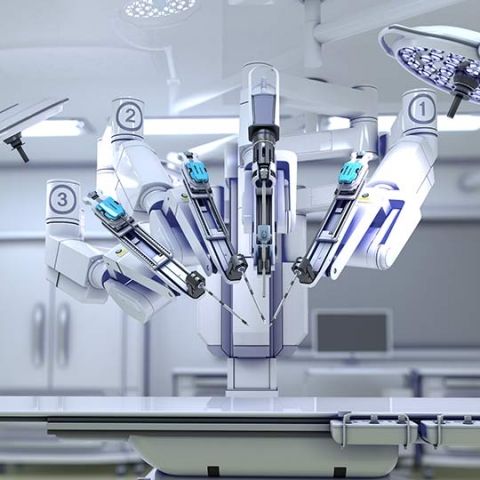 Despite persistent advancements in medical science, the prospect of going under the knife still terrifies a large number of us. Not to aggravate those fears, but think about a time when none of the modern advancements was available to doctors and patients. A time when things like anaesthesia and bacteria-free environments weren’t a standard in healthcare - does that scare you away even more? Then brace yourself, as we travel back to prehistoric times to understand how the reliability of surgery has reached its current status.

One of the earliest known surgical procedures was trepanation - literally drilling a hole in your head. According to evidence from one burial site in France, this procedure goes as far back as 6500 BC according to some discoveries and 12000 BC according to some. Carried out by a trephine, which refers to a class of instruments used for the cutting purpose, the procedure carried on even until the Middle Ages. The primary objective, according to the discovered records, seemed to be to relieve intracranial pressure. While there is no evidence if it fulfilled that purpose, there is some to support that a number of people subjected to it did survive. 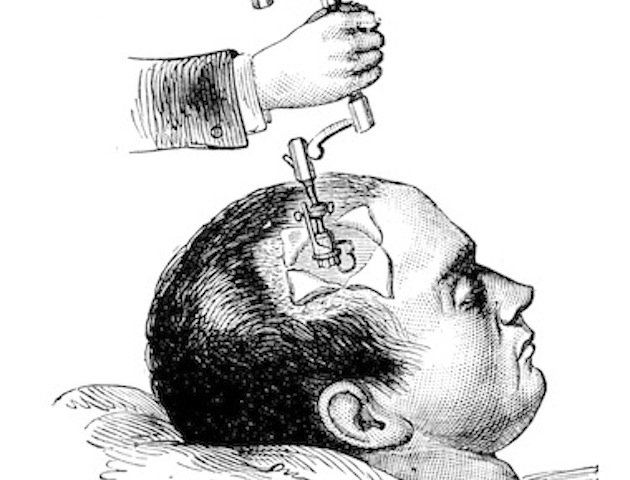 The gruesome practice of trepanation was followed for a long time

While technically not surgery in most cases, examples of bone setting and splitting can be found in archaeological records, related to civilisations like the Aztecs. Another ancient surgical practice was that of bloodletting, practised among the Mesopotamians, the Egyptians, the Greeks, the Mayans, and the Aztecs. This practice would involve voluntarily bleeding out or extracting blood from the body, attributing it to various beliefs. One of those beliefs was that our bodily fluids, or “humour”, had to remain in balance. Egyptians even got inspired by the bleeding hippopotamus, not knowing that its sweat was red. While modern anaesthesia was still ages away, material extracted from herbs like opium and cannabis, and even alcohol was used to numb the senses of the patient and dull their perception. However, not being good enough, afflicted patients sometimes did choose to succumb to their ailments or continue suffering rather than undergo the surgery, and those who did also often succumbed to overdose from the numbing agents. 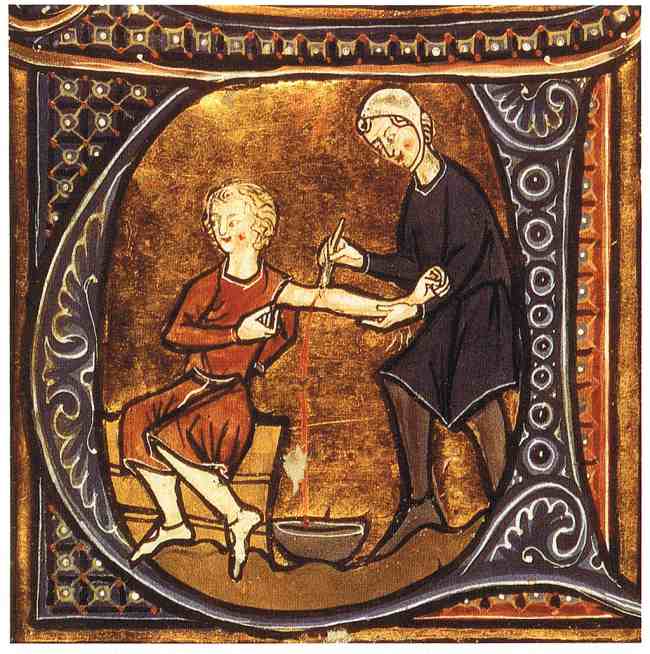 Bloodletting was another unscientific process in medical practice

Interestingly, Ancient Egyptians gained extensive knowledge of human anatomy from the practice of making mummies. Egyptian surgeons were also known to use clamps, sutures, and even cauterisation during their treatments. They also employed instruments like probes, saws, forceps, scalpels and scissors. They also used naturally occurring material like honey and willow bark as antiseptics.

Around the same time period as the Egyptians, Greeks also helped advance surgery significantly. They put wine (alcohol) into use as a disinfectant, and Herophilus is still sometimes referred to as the “Father of Anatomy”. Our own country wasn’t far behind. Sushruta is known as the “founding father of surgery”, and his period is estimated between 1200 BC - 600 BC. Much of what is known about him comes from the Sushruta Samhita, a set of Sanskrit volumes authored by him. These texts describe, in detail, the examination, diagnosis, treatment, and prognosis of numerous ailments, as well as procedures on performing various forms of cosmetic surgery, plastic surgery and rhinoplasty. 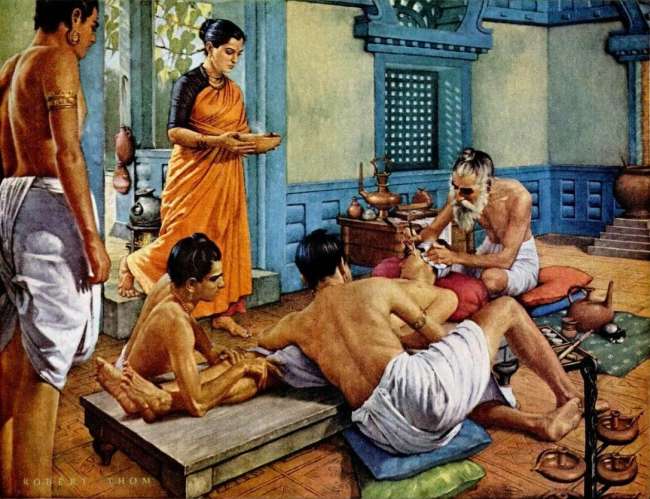 Sushruta is celebrated as the father of surgery

Historic (Up to the 18th Century)

Al-Zahrawi was one of the most influential physicians in the Middle Ages, notably around 900 AD. In his time, he authored the Kitab al-Tasrif, a thirty-volume encyclopedia of medical practices. In a Latin translation, the surgery chapter of this work, On Surgery and Instruments, received a lot of popularity and became the standard text for the next 500 years. It was also the first illustrated surgical guide. He is also known to have pioneered tracheotomy and neurosurgery. 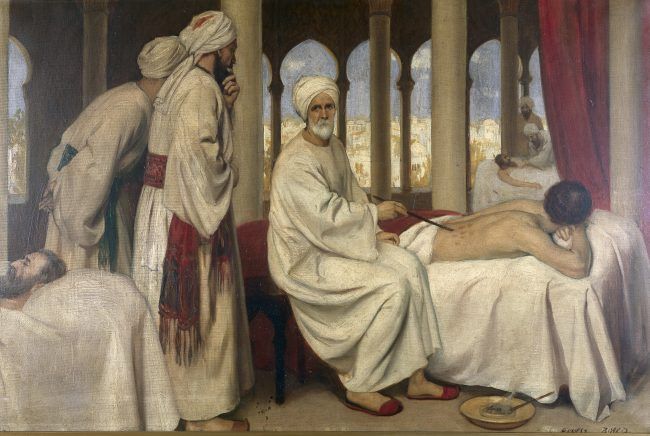 Surgery underwent a transformation in the Middle Ages, during the 13th century, in the sense that a new type of craft emerged. Travelling Barber-surgeons would cut hair as other barbers, but they would also perform tooth extractions, bloodletting, bone settings, amputations and other small surgical operations. While physicians had started to go to medical school, surgery was still mostly learnt through apprenticeship and observation, not unlike the job of a blacksmith. Also, around this time, women started filling the role of the barber-surgeon as well, mostly because they were not allowed to become physicians. This continued till the 1700s when surgical training moved to universities, from which women were banned.

Two figures in the 16th century brought about major changes to the world of surgery. Andreas Vesalius, a professor in Padua around the time, broke the misconceptions about human anatomy which were based on animal dissection. His dissections on human cadavers led to the ground-breaking De Humani Corporis Fabrica Libri Septem, a text on anatomy that would stand the test of time for many years to come. He also advocated that every surgeon should get practical experience in dissection. 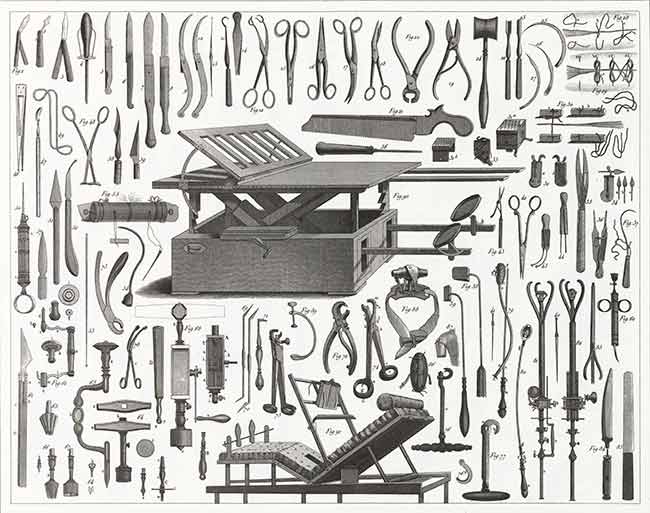 Surgical equipment from the Victorian era

The second name is that of Ambrose Paré. The prevailing method of closing wounds was burning them shut (cauterizing, through boiling oil). Paré developed an emollient of egg yolk, rose oil, and turpentine for gunshot wounds, and also advocated for ligating (tying off) of blood vessels after amputation.

Before moving on to modern times, it is imperative to talk about John Hunter, the Scottish surgical scientist in the 1700s. Bringing an empirical approach to surgery, Hunter believed in observing and documenting everything by himself, without relying on third-party testimony. His work advanced our understanding of the venereal diseases and also advocated the study of pathology, infections and inflammations.

The availability of better pain relief transformed surgery in the 19th century. By the 1840s, ether was being used by pioneers like Crawford Lang, and chloroform by John Snow, physician to Queen Victoria. In addition to pain relief, it allowed physicians to conduct longer surgeries and perform more intricate operations. 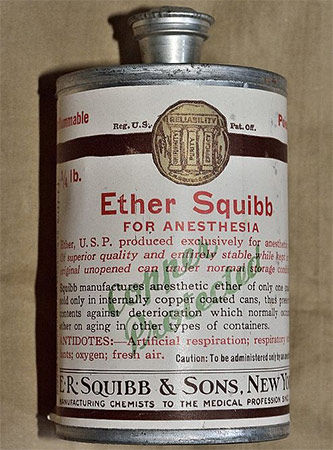 An old bottle of ether as an anaesthetic

The number of operations being undertaken started to grow, and with it came another problem - our lack of understanding regarding infections. Post-operative infections started to become quite common. The first step in curbing this came from Hungarian doctor Ignaz Semmelweis. He observed that particular students who went from the dissection room to the maternity ward were causing higher rates of maternal deaths as compared to midwives. Even under ridicule, he imposed compulsory handwashing and this led to a reduction in deaths in his ward. However, his advice was still ignored by the Royal Society. 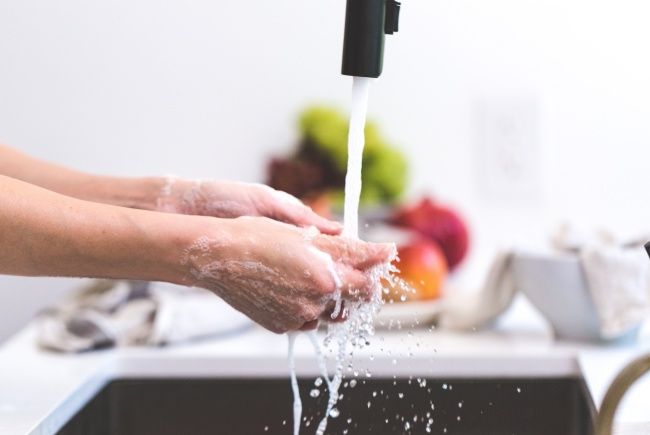 A simple habit to you was once a medical breakthrough

The practice of using antiseptics wasn’t accepted until Joseph Lister, based on the works of Louis Pasteur, carried out tests with carbolic acid on his instruments in the 1860s. The incidence of gangrene, his topic of study, immediately reduced and his paper,  Antiseptic Principle of the Practice of Surgery saw widespread acclaim and set up practices that have prevailed.

Lister decided to take things one step further and instructed surgeons under him to use sterilised rubber gloves, wash their hands in 5 per cent carbolic acid solution, and use steam sterilised equipment. The empirical approach of Hunter, the discovery of modern anaesthesia, and Lister’s sterilisation practices set the foundation for the invasive surgery we see today.

While diagnosis improved with the advent of X-ray in the late 19th century, the 20th century saw surgery become even safer and highly specialised. During the 1940s, the development of blood transfusion reduced death from blood loss, and penicillin greatly improved postoperative recovery. Over the years, the complexity of surgery significantly increased and saw aspiring surgeons study particular aspects of surgery for specialised qualifications. 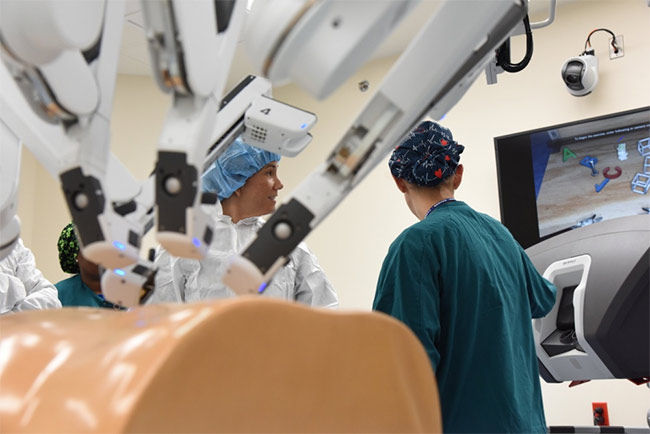 Robotics surgery has brought about a new level of precision, as well as the capability of remote surgery

The 1960s saw the first heart transplant and a heart bypass. Robots began assisting surgeons back in the 1980s, which also saw the first artificial heart used. Over the last 20 years, stem cell therapy, remote surgery, the first face transplant, multiple limb transplants, and many other achievements have completely redefined the pace of surgical advancements.