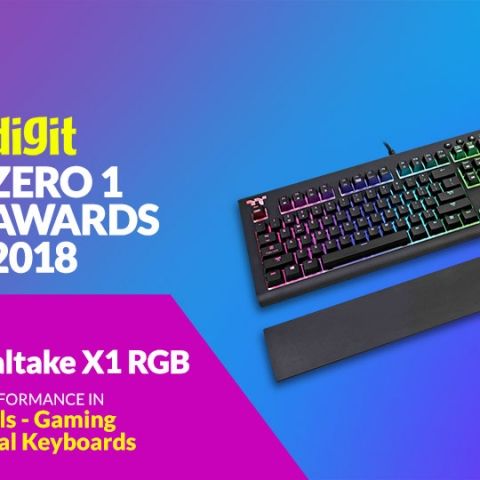 The gaming keyboard market was aggressive in 2018. Manufacturers tried to cater to all kinds of gamers. Mechanical keyboards have become the norm nowadays. Let's have a look at our Zero1 award winner.

The Thermaltake X1 RGB caught our eye with the software and app features they introduced in this premium keyboard. The X1 RGB uses genuine Cherry MX mechanical switches and we didn’t come across any input issues in our testing. While it doesn’t sport full key rollover, it’s beyond the minimum requirement for gaming and implemented anti-ghosting as well.

Thermaltake’s revamped software utility tool surprised us. The older versions were functional but navigation was an issue. On the X1 RGB’s software utility, it was easy to play around with the lighting effects and even recording macros was a breeze.

Thermaltake even implemented control of the keyboard with their mobile app. The app includes lighting effect control, a virtual game controller, virtual keyboard and customisable virtual macro buttons. The best part is that all these features work fine while delivering the expected performance.

Gigabyte released the K9 Optical in its AORUS gaming brand that housed Flaretech optical switches. They provide a durability of 100 million keystrokes, which is the highest. Your keyboard chassis and keycaps might wear out in a few years but your optical switches will continue functioning for over a decade or two.

For the past few years, the prices of mechanical gaming keyboards have dropped drastically. More keyboards have started appearing in the market with Cherry MX-compatible or knock-off mechanical switches. This has also allowed keyboard manufacturers to strike deals with switch manufacturers to develop switches based on their preferences and rebrand them with their own logo. The VPRO V510 has done the same with mechanical switches having the Rapoo logo.

Although there’s no software support, the V510 is built well. It offers all the basic requirements including full key rollover, anti-ghosting and support for multimedia and volume control with the help of modifier keys. The keyboard is spill-proof so it offers protection from accidental spills. The keyboard won’t get damaged if you drop water or any liquid on it. However, this doesn’t mean that the keyboard can survive submersion. The V510 can serve as a great choice for entry-level gaming and for gamers who want to experience a mechanical keyboard on.