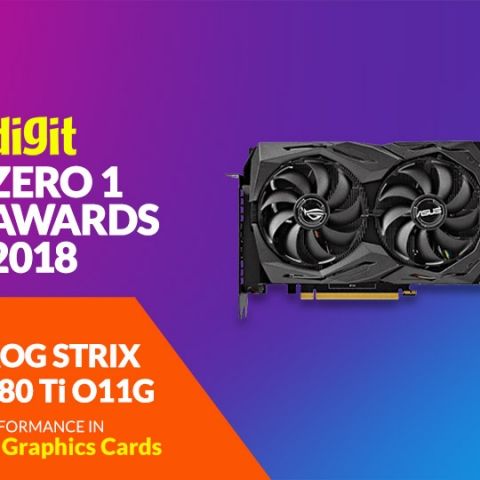 The graphics card segment in 2018 has been one-sided this year. There were a few notable developments in this segment which caught our eye. Take a look at our winner for the Zero1 award in this category.

The graphics cards segment has been one-sided this year. Aside from a few refreshes in the low-end, the only graphics card of note that Radeon Technologies Group came out with this year was the Radeon RX 590. That too is essentially the RX 580 built on the 12nm process node. The RX 590 is a good card in terms of performance. However, the 12nm process from GloFo is a variation of the Samsung 14nm process. So not a lot has changed actually.

NVIDIA, on the other hand, is having a gala time. Its RTX series requires no introduction. The sheer amount of leaks and press attention that the 2000 family of GPUs received far exceeds that of any other component. By making real-time ray-tracing accessible, they have now hit the ball into the developers’ court. But the RTX series have seen a slow start. A third competitor, Intel seems to be readying their graphics cards too. Here is your Zero1 winner.

All our RTX 2080 Ti graphics cards had the same boost clock of 1665 MHz. So, it was quite the pain to establish the best. Even the cooling assemblies on all the cards had three fans, ran most games on 4K at 60 FPS and had beefy heatsinks. So it came down to the overclocking benchmarks this time. All cards had their power target increased to 125% and the memory to about 1000 MHz greater than stock.

We then started bumping the GPU clock to see which card could produce stable runs at the highest clocks. The ASUS card turned out to have the most highest stable OC. We managed to get it to run at 175 MHz over stock frequency while the others would freeze. It was a tough competition but the ASUS ROG STRIX RTX 2080 Ti O11G ended up as this year’s Zero1 Award winner.

Coming in a close second, the GIGABYTE RTX 2080 Ti Gaming OC took the runner-up spot. It’s got the same clocks as the ASUS card with a gaming mode that nets you 1650 MHz and an OC mode that goes all the way to 1665 MHz. Moreover, the cooler is open-ended on all sides with three massive fans. However, in our OC tests, we couldn’t get any of the 175 MHz runs to complete successfully.

The card performed really well at 170 MHz OC and the benchmark metrics were barely discernible from the ASUS card. This being the Zero1 Awards, we can only pick one winner so the GIGABYTE RTX 2080 Ti Gaming OC comes in at a close second place.

It’s capable of churning out around 55-60 FPS on 1080p in most video games running at their absolute max settings. This is a pretty decent achievement on its own. It certainly doesn’t help NVIDIA’s case that their graphics cards are all ridiculously priced, making it an easy win for the Radeon RX 590.