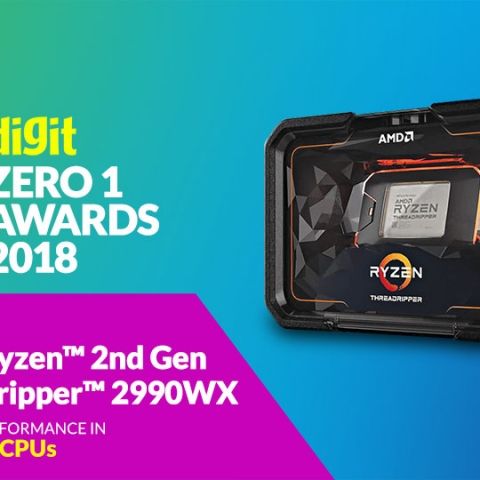 Desktop processors have come a ridiculously long way over 2018. Both AMD and Intel have pushed the envelope this year. CPUs had been Intel’s home ground for years before the two companies began competing with each other. The battle’s been raging for more than four decades and it seems that AMD has gained a significant foothold of, what used to be Intel’s territory. Don’t get the wrong idea, Intel still dominates the market in terms of pure sales figures.

In the Indian market, Intel has a 90% market share with AMD at 10%. However, AMD gained numbers primarily because the Ryzen and Threadripper CPUs that offer a lot more cores for the same amount. Over the past few months, Intel CPUs have been in short supply and are taking longer to appear in the Indian market leading to AMD getting an ever bigger piece of the pie. This should give you a clear idea about who the winners for this years Zero1 Awards in the Desktop Processor category will be.

Officially, the world’s first 32-core HEDT CPU, the Ryzen™ 2nd Gen Threadripper™ 2990WX is an absolute monster of a CPU. It’s unlocked as all AMD CPUs are, has a massive 64 MB L3 cache and starts off with a base clock of 3 GHz. The sheer ridiculousness that one experience while benchmarking this CPU is indescribable. You have to experience it personally.

Sporting six fewer cores, the Ryzen™ 2nd Gen Threadripper™ 2970WX comes in at second place. However, it’s not close a close second. The difference in performance metrics between the two SKUs can go as high as 16% in multithreaded applications and even more in certain benchmarks.

In single-core performance, the two are equally matched. With a 30K price difference between the two CPUs, the 2970WX seems to be more favourable for folks who wouldn’t mind a minor reduction in real-world performance in day-to-day applications. For those who are more into getting all the cores into action, the 2990WX is still the better option.

We picked the Intel Core i9-9900K as the Editor’s pick for two simple reasons. It is the best processor for gaming and maintains a lead over its counterparts from AMD. Moreover, its single-core performance is also the highest we have ever seen.

The 9th Gen flagship is supposed to be priced at approximately Rs 34,000, however, owing to a scarcity of CPUs the world over, the Intel Core i9-9900K can be seen retailing for nearly twice as much. It’s a great CPU but not worth the current price at all.