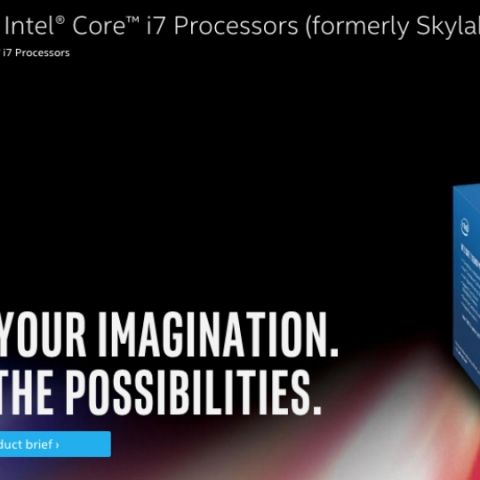 While there have been numerous articles lamenting over the death of the desktop, we still find an ample amount of queries for custom configurations filling up our inboxes every month. The PC may be selling a little less but these statistics show that general purpose machines are becoming smaller and smaller. Those who need more performance will always veer towards the ever powerful desktop and it’s for good reason. The components in these small systems are increasingly becoming more power efficient, but for the sake of extending battery life the true potential of these embedded processors lie unutilised. The desktop is where you get to make the most of these new technologies and with the 6th Generation Intel® Core™ i7 and i5 processors, the desktop will live on for much longer. ‘Skylake’ as the 6th Generation Intel® Core™ architecture was known prior to launch has some very interesting features that you might be interested in.

More for gamers
Skylake is what Intel® terms as a ‘tock’ cycle*1, which means it is an improvement over the previous generation of Intel® processors without reducing the manufacturing process. So these 14 nm*9 have gained more in terms of pure performance. And to add to this it now comes with the whole new LGA1151 socket and 100 series chipset. Those who want to make the most of the new platform will undoubtedly go for the power Z170 chipset. They now come with 20 PCIe Gen3 lanes*2 which gives high-end graphics cards enough headroom to scale with your gaming needs. Your gaming experience wouldn’t be hampered by the lack of PCIe lanes or due to the use of lane multiplexing.

*10Source: Intel.com For illustration purpose only.

Better overclocking
And Intel® has taken the FIVR*3 (Fully Integrated Voltage Regulator) off the die and opted for external VRM(Voltage Regulator Module). This means official board partners can add a lot more premium components to the VRM circuitry and give the user more fine-tuned control over voltage and current levels. Soon enough we’re going to see more overclocking records being broken than ever before. The newer LGA1151 socket was introduced to aid with better overclocking. One good thing to note would be that the mounting holes for the CPU cooler are of the same dimensions as earlier*4 so you’ll still be able to use your aftermarket cooler from the LGA1150 or LGA1155.

*11 Source: Wikipedia. For illustration purpose only.

DDR4
DDR4, which had till now been only available for the Extreme X99 Platform is now available for the more economical Skylake processors but that doesn’t mean DDR3 is out of the picture. Well, DDR3 per se, is out but you can use DDR3L with Skylake*5. The ‘L’ stands for Low Power which has more to do with power savings and does not indicate reduced performance.

Going Wire-less
With Skylake, Intel® has taken another step towards doing away with wires altogether. Soon enough you will start seeing laptops running off of Skylake processors that charge wirelessly, duplicate display via Wireless-Display (WiDi)*6, and provide awesome graphics thanks to the new Iris Pro graphics.

*13 Source: Toshiba.com For illustration purpose only.

Thunderbolt 3
If the internal graphics were to fall short then it isn’t the end of the road because Skylake’s Sunrise Point (another name for the 100-series chipset) now comes with Thunderbolt 3*7. This new iteration of the connectivity port boasts of so much bandwidth that you can drive two 4K monitors and transfer data at lightning speeds. Even extremely bandwidth heavy gadgets like external graphics cards which weren’t utilized to their full potential with previous gen data ports can now crunch more numbers thanks to Thunderbolt 3.

Intel® HD 530
While on die graphics aren’t going to catch up to discrete cards anytime soon, the new Intel® HD 530 offers a significant upgrade over the HD 4000 series. In fact, it performs between 20-40 percent better than previous generation of Intel®’s integrated graphics*8. It would be fair to say that if at all your graphics card does give out and has to be sent for repairs, you’ll still be able to game albeit at lower settings. Even content creators will easily note the difference in video encode times when Intel® HD 530 and Intel® Quick Sync work in tandem.

In the coming weeks, we’ll be taking a closer look at some of these aspects to shed more light on Skylake’s improvements.