If you would have asked us two months back what CPU to buy while making a gaming PC, the answer would have been Intel. Even for our 50K gaming rig, we recommended that you buy the small, yet powerful Intel Core i3-6100 processor. However, if you are still finalising your build, we would suggest you hold off your plans some more, as AMD’s latest lineup is just at the verge of launch.

As you may have heard from online chatter or from like minded PC enthusiasts, the new AMD lineup is called Ryzen, which was earlier codenamed ‘Zen’. What we know from the rumors and leaks so far is that the prices of the AMD Ryzen processors will start as low as $129 (Rs. 8,700 approx) and will go up to $499 (Rs. 33,500 approx), which is typical AMD pricing. However, this year AMD is being thorough and it is not just the price which the company is throwing at the competition.

What’s new?
For the new Ryzen chip, AMD has gone back to the drawing board and come up with a brand new x86 architecture. The new architecture promises better single core performance, which has always been the sore point for AMD chips and further enhances support for Direct X12 as well Vulkan. According to AMD, there are five new features on Ryzen which will enable the company to claw its way back into the limelight. These are - Pure Power, Precision Boost, Extended Range Frequency, Neural Net Prediction and Smart Prefetch.

One of the coolest features incorporated in Ryzen is the new adaptive power control called the ‘Pure Power’. So, the chip analyses temperature, speed and voltage, and boosts or lowers the performance & voltage, and even caps the temperature in real time. Further, with ‘Precision boost’, the chip fine tunes the boost clock speed by 25MHz at a time, instead of 100MHz, which has been the norm for a long time; and it does all this own its own, in milliseconds. 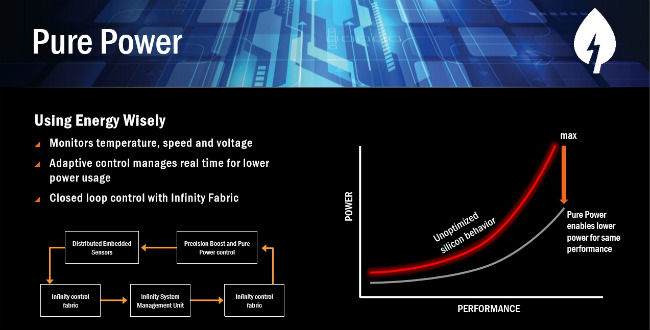 Now, overclocking has always been the big thing with AMD chips and the company is building upon that solid base with a new feature called “XFR”, otherwise known as Extended Frequency Range. This will be available to performance enthusiasts , who have the right cooling and hardware combo to push the CPU beyond its precision boost limits. Say for example, if the chip has a base clock speed of 3.4GHz, and a boost clock of 4GHz, with prerequisites in check, the CPU will go beyond the 4GHz threshold automatically if required. Also, the chip will overclock itself, not according to some predetermined clock speed and voltage, but as and if the thermal cooling is available. More importantly, it will sustain that clock speed constantly maintaining the thermal caps. So, in a way it will be automated overclocking and that too within the limits as AMD has built-in fail safes for temperature and burn-outs. Although, we believe AMD will allow for manual overclocking as well for people who know what they are doing. 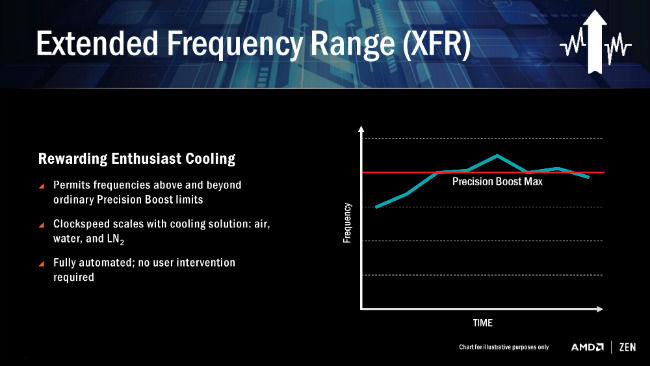 AMD also claims that the Ryzen chip has a new prediction algorithm which self trains the chip as you use it and will learn what instruction to fetch, the next time you open the same software. This has followed one of the biggest changes in architecture since Bulldozer. If AMD pulls this off, it might do wonders for video encoders, graphic designers and other professionals who work on creative set of softwares. This will also help YouTube and Twitch streamers. 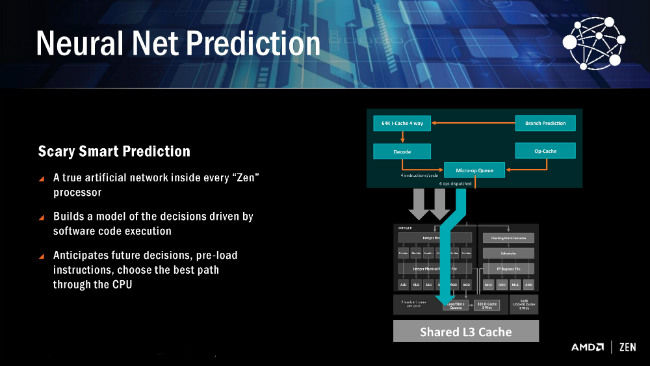 The performance figures
First of all, AMD Ryzen will finally catch up with Intel after a haul of almost 5 years. The last time this happened, it was 2011 and AMD had just launched the Bulldozer architecture based FX chips. Since then, the company hasn't shown any significant innovation in the CPU department. Now, we won’t hold it against you if you believe that AMD is currently all talk and no show as their track record hasn't been all that great in the past. However, some new leaks pertaining to leaked benchmark figures tell a different story. Check out the leaked benchmark images below. Here the AMD Ryzen 7 1700X is being pitted against the likes of some K-series Intel CPUs. Check out the performance difference between the Ryzen chip and the Intel Core i7-6850K. You will observe that the Ryzen chip performs better in most of the benchmarks. To top that, the Ryzen chip is running on disabled Boost and on a budget motherboard, which limit the capabilities of the chip even further.

Now, all this has sparked big debates on various forums about the genuinity of these images. However, the key takeaway here is that the hype train goes on and the leaks are in line of what AMD demoed at its New Horizons press conference earlier this year. There AMD showcased how they have achieved 40% increase in IPC (Instruction per cycle) over the previous generation. 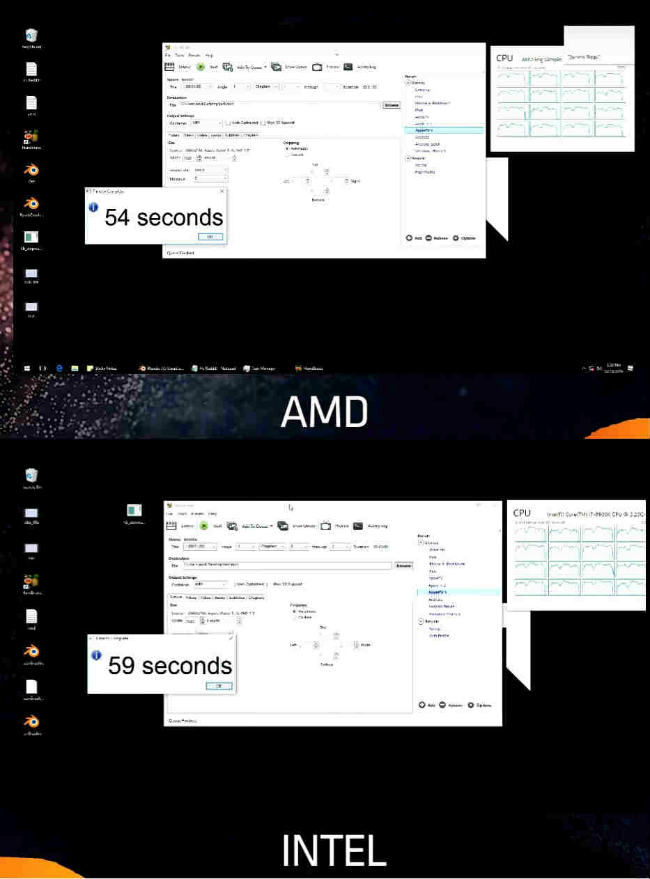 In the new Horizon event demo, AMD runs a Blender test on an 8 core, 16 thread Ryzen chip with a 3.4GHz base clock speed, which finished faster than the Intel Core i7-6900K. Now, the thing to note here is that the said AMD chip had a lower TDP of just 95W compared to the 140W of the i7-6900K, and it was running with its boost disabled. This puts AMD at a big advantage if they price the new lineup right.

Price matters
So, if we take previous AMD processor prices into account, the new Ryzen chips might be priced at an incredibly low price, giving it the upper hand in price to performance ratio. According to the leaked prices, the top of the line AMD Ryzen 7 1800X with 8 cores, 16 threads will cost $499 (Rs. 33,500 approx), which is likely to compete with the top of the Intel K series processors. Even if the 1800X is comparable to the let’s say the Intel-6900K, there is a huge price difference between the two processors, with the Intel processor currently priced around the Rs. 85,000 mark.

Further, AMD motherboards have always been more affordable than their Intel counterparts, and we believe that the new AM4 motherboards will be priced accordingly. AMD will make the deal even sweeter, since the new motherboard platform will support overclocking even on mainstream motherboards. 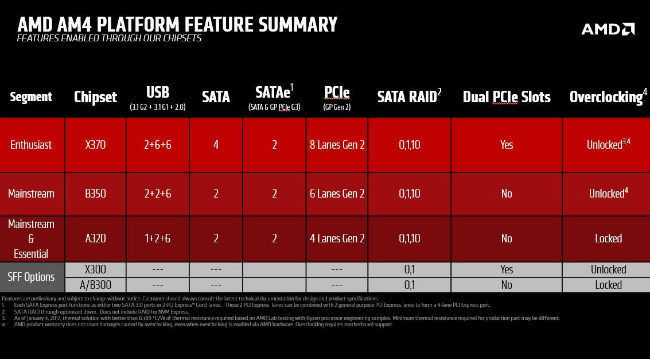 Now, even before the launch, all major manufacturers are ready with AM4 motherboards, reaffirming their support to the company and the brand itself. The AM4 motherboards will be released in three variants - X370, B350 and the A320. Here is how they stack up. However, for the first time, AMD will be offering overclocking support to the mini-itx motherboards with the new X300 line. So, it seems AMD has everything in check and is ready to take on Intel.

Unshackling the past
There is one point of caution though, AMD has been known for overpromising and under delivering. With so much hype, the doubt in people’s mind might be fading, but nothing can be said for certain unless the Ryzen performs well in real life; as unhinged as it performed in those New horizon Demos.

Intel on the other hand Intel is stuck in the past, and for the fourth consecutive year, will be shipping consumer processors based on 14m nodes with minor optimizations over the 7th gen Kaby Lake. If that’s what Intel has in store, then it is definitely worth waiting for Ryzen and what AMD has to offer. This might indeed turn out to be the best year to buy a PC.