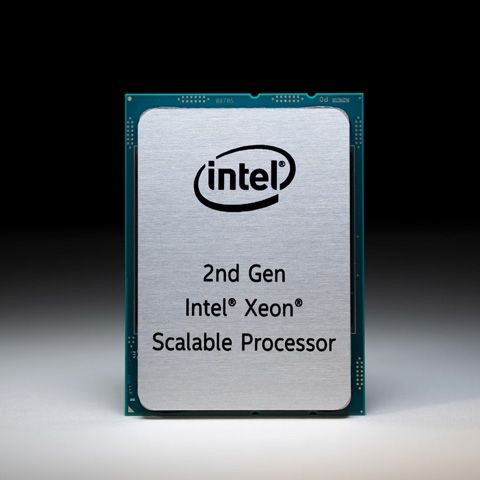 The battle for supremacy in the CPU space isn’t just limited to the mainstream desktop segment or the HEDT segment. There’s quite a lot of action even in the enterprise space and that’s evidenced by the recent launch of the 2nd Gen Intel Xeon Scalable Processor Family. However, this year’s data centric portfolio refresh isn’t limited to just the processors. One major update is that of Optane DC Persistent Memory, which from what we’ve witnessed, is poised to change the data centre landscape tremendously. Finally, the final major update comes in the form of new AVX-512 extensions (VNNI) under the x86 ISA.

Cascade Lake, as this family is know internally, is based off the same Skylake microarchitecture. So core-to-core running at the same frequency, a 2nd Gen Xeon Scalable processor will perform at the exact same level as long as the workloads do not make use of the newer features. That might sound like an absurd statement but aside from the newly introduced VNNI extensions, the two microarchitectures are the same. However, when you consider VNNI as well as the support for Optane DC Persistent Memory, you end up getting a massive boost in performance with workloads that can utilise VNNI. Essentially, with a few minor tweaks, Intel has managed to extract much higher performance from the 2nd Gen Xeon Scalable Processor family. However, that’s not the end of the road. This new generation of processors also includes hardware mitigations for the infamous Spectre and Meltdown hardware vulnerabilities. When the fixes for these vulnerabilities were issued over the course of the past year, it was in the form of OS patches and CPU microcode updates. These have a negative hit on the CPU performance and as a result, one would expect performance to drop but Intel has managed to get more performance with these fixes incorporated.

This second generation of Xeon Scalable processors include 20 Platinum SKUs of which 4 are from the 9200 family while the remaining 16 are from the 8200 family. Then there are 21 Gold SKUs from the 6200 family and 10 Gold SKUs from the 5200 family. This is followed by 7 Silven 4200 SKUs and lastly, there’s one Bronze 3200 SKU. It stands to reason that Intel would have more SKUs in the most popular segment of the SKU table, which seems to be Gold. We did ask if Intel could give us numbers as to which segment sells the most but they didn’t give us a confirmation. The Platinum 8200 series also seems to be quite popular but the best SKUs of this generation lie in the Platinum 9200 segment. 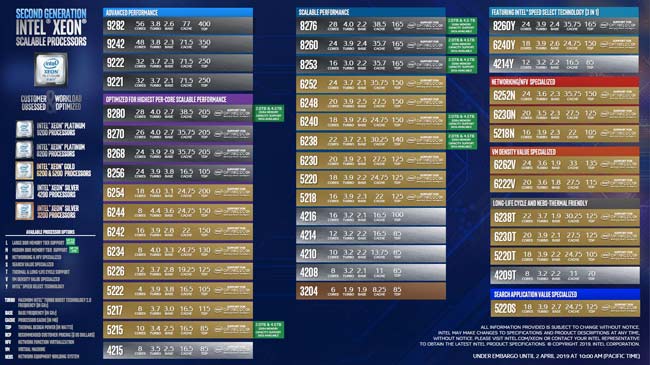 This is where you get the 56 Core / 112 Thread Xeon Platinum 9282 which is clocked at 2.6 GHz and has a Turbo Frequency of 3.8 GHz. This massive package has a TDP of 400W which is ridiculous on its own. Essentially, these SKUs are made by placing two Xeon dies on the same package with a high-speed interconnect between them. So they aren’t exactly giving you 56 cores on a single die. As a result of having two dies on the same package, you end up getting double of everything. This means you get 12-channels for the DDR4 memory @2933 MHz. The 9282 is being provided as a BGA package with 5903 balls @ 0.99mm pitch. Intel will not be providing the top three SKUs in the Platinum 9200 family to end consumers. Instead, the processor as well as the platform will be given to OEMs who can then customise certain aspects of the platform and then you get to buy the offering from the OEMs. OEMs have already managed to build 8 socket systems with the new 2nd Gen Xeon Scalable family but those are not using the 9200 processors. At most, they’ll be able to offer 2S configuration with these high-end SKUs, which is essentially a 4S configuration if you consider the 2-die-on-a-chip configuration. This is the processor equivalent of buying a luxury sedan. You can get a heavily tailored system and in return you will have to offer your first-born child. Not really, but you get the gist. When asked why these units were being offered in such a manner, we were told, "After extensive customer engagement, Intel determined that the most optimal method to deliver the processor in a timely manner was through BGA package and via a highly integrated highly dense configurable system level solution.” 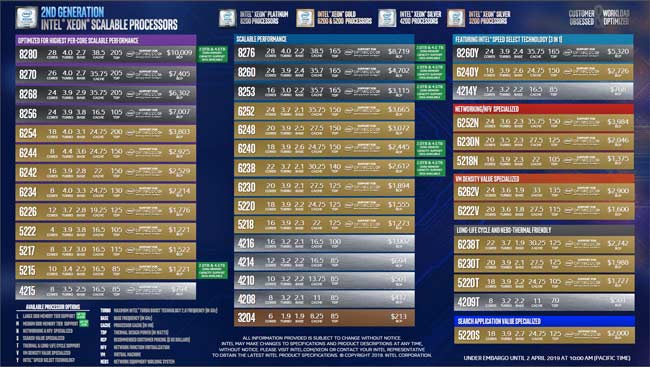 You might have noticed that some of the SKUs in the family seem to be repeated. That’s because you haven’t checked the model name suffix. In all, there are 7 suffixes to remember:

You’ve no doubt heard of Optane, an Intel brand under which we’ve seen SSDs until now. On the client side, these have been primarily used for caching SSDs that help increase performance when used with mechanical Hard Drives. On the SSD front, Intel announced the Optane SSD DC D4800X which is an upgrade over the P4800X in the sense that it has dual ports to ensure higher availability should one of the ports malfunction. Intel has had dual port SSDs for a while such as the DC D3700 Series. The D at the beginning indicate dual port functionality. The Optane DC D4800X SSD will be available in the U.2 form factor. 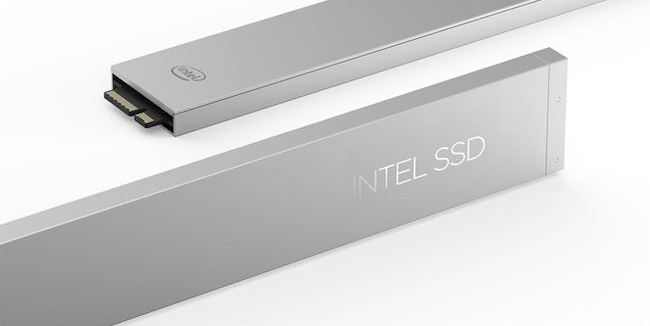 One of the diagrams that ended up on most of Intel’s slides was that of the storage hierarchy triangle. The D4800X sits towards the warmer end of the triangle since is is a faster means of storage. For more capacity, Intel introduced QLC NAND based SSDs in a new form factor. The Intel SSD D-5 P4326 uses QLC NAND so it becomes way cheaper than MLC or TLC NAND based drives and the new E1.L form factor looks like a long metallic ruler. It’s meant to be stacked side by side in a 1U rack and each SSD has a capacity of 30.72 TB. Throw a bunch of these together in a 1U rack and you can have up to 1 Petabyte of storage. These “rulers” are EDSFF compliant so you don’t need to worry about physical compatibility. Performance wise, the D5-P4326 has a peak sequential Read speed of 3200 MB/s and a peak sequential write speed of 1600 MB/s. With Random data, it can handle 580 IOPs during read and 11K IOPs during write.

While that was the usual SSD launch, the more important launch was that of the Optane DCPMM or DC Persistent Memory Modules. These are non-volatile memory modules which utilise the same form factor as DDR4 memory modules do and it acts as both, DRAM as well as a storage drive. Simply put, there are two modes - App Direct Mode and Memory Mode. 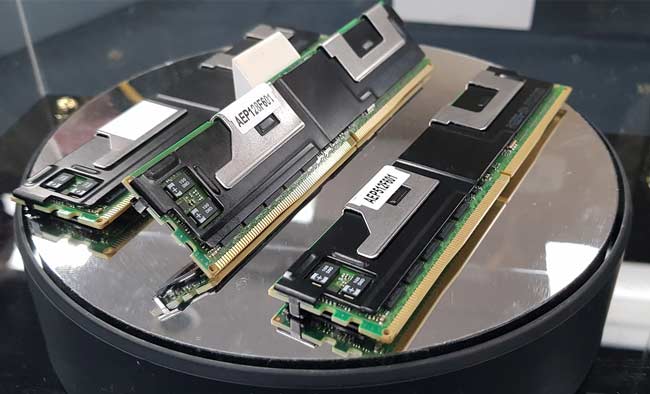 Think of memory mode as DRAM, except you still need to have DRAM memory installed alongside Optane otherwise the system will not boot. Optane DCPMM simply acts as the main system memory with the DRAM acting as a hotter buffer between the processor and the Optane DCPMM. Optane DCPMM is slightly slower than DRAM but given the price, the trade off is understandable. This configuration is, however, system agnostic so your computer does not have to figure out where to transfer data. All of that is taken care of by the memory controller. Optane is significantly cheaper if you look at the density that it provides. So by populating your server with Optane DCPMM, you will end up getting more main memory storage capacity without breaking the bank, thus, reducing the TCO (Total Cost of Ownership).

Then there is the App Direct Mode, which converts the Optane DCPMM into a non-volatile storage space. So if you have to reboot, the whole process of dumping data from your memory to your drive,  rebooting, then transferring data back to the memory, is simplified and you end up saving a lot of time, thus helping with the uptime.

Intel mentioned that several vendors have already been using Optane memory for a few months now.

After Google and Apple, Microsoft caught listening to private calls