Where does India stand in the race for the fastest internet? Ookla Co-Founder, Doug Suttles answers 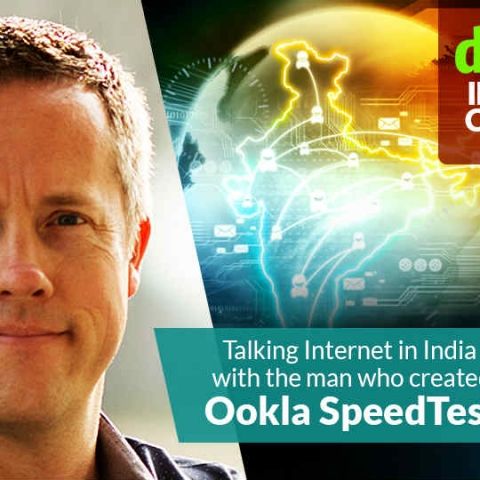 Doug Suttles, Co-Founder and General Manager of Ookla, the company behind hugely popular internet performance measuring service Speedtest.net, is very optimistic about the intense competition building up in India’s mobile and broadband internet space. He is, afterall, the custodian of billions of internet speed tests performed all around the globe - 10,354,037,500 to be exact (at the time of writing).

Even though Speedtest and Ookla were harshly criticised by firebrand Reliance Jio for favouring Airtel and deeming it the Fastest Mobile Network for 2016 and 2017, Suttles commends Jio for increasing India’s access to the internet with their rollout of free 4G LTE.

As for its testing methodology being flawed - an allegation framed by a miffed Reliance Jio - the Speedtest head fiercely stands by the mobile data collected by his company.

If Reliance Jio was the fastest mobile network in terms of data speeds in India, Ookla would have called it so, or so says Suttles.

We had a chance to interact with Suttles through an email correspondence, wherein we asked him about his thoughts on India’s burgeoning demand for high-speed internet, the reality of India’s internet speeds and whether Speedtest got caught in the crossfire between Airtel and Reliance Jio - one, with the largest number of telecom subscribers and the other, with sights set on the top rung.

Digit: Ookla's Speedtest app has been a go-to application for measuring internet speeds across the world, can you trace back your first steps into creating the service? How was the idea of Speedtest conceived and how have you seen it grow and evolve since 2006?

Suttles: Our main goal has always been the same: to provide unbiased, data-backed transparency into the accessibility and performance of networks. The founders of Ookla worked together at an ISP named Speakeasy where they built the Speakeasy Speed Test. The early technology behind that is what has evolved into Speedtest today.

Digit: Speedtest is a free service, but Ookla also has a paid model for businesses and telecom companies. How do the two differ?

Suttles: Millions of people use Speedtest every day to determine the speed and performance of their internet connection. This information just so happens to also be valuable for operators and other organizations that seek to better understand the performance of their networks and identify areas for improvement. Our enterprise business consists of providing this data to those companies. We also work with regulatory bodies (e.g. FCC in the US) and global trade groups (e.g. GSMA) to bring increased transparency to internet performance around the world.

Ookla is a completely neutral third party organization, meaning that we do not influence testing in any way to produce any particular outcome for a client. Real people take a Speedtest when they need to know how their internet is performing for them when they need it -- those combined, unmodified results are exactly what operators see and can use when they license our data.

Digit: Is Ookla working with any Indian startups/SMBs to provide network diagnostic services?

Suttles: Not at this time, but we would be open to the possibility.

Digit: Ookla's recent partnership with Airtel in India was highly criticised by Reliance Jio. Do you think Ookla got caught in the crossfire between the two telecom operators?

Suttles: Airtel received the designation of Fastest Mobile Network Speed for the 2016 and 2017 award periods based on Ookla’s independent analysis. We wouldn’t classify Airtel as a partner, but instead as a valued customer, like many other major operators worldwide. When we analyze a market, we do so as an impartial, neutral data source. We let the data speak for itself. India is a competitive market, and the opportunity exists for any of the operators to be the fastest. We look forward to seeing how the market develops in the coming year.

Digit: With Airtel using Ookla's endorsement, how can users trust it as a neutral test service

Suttles: Airtel was awarded the designation of Fastest Mobile Network Speed based entirely on the results of objective data obtained from millions of real outcomes using Speedtest. If during the same time period a different operator had achieved faster speeds, then they would have received the designation instead. Consumers can trust that in everything we do it is the data alone that tells the story. We want consumers to have the accurate, unbiased view of the operators in India.

Digit: Can you come clear on your testing mechanism for dual-SIM smartphones Reliance Jio had alleged that Ookla's testing methodology is flawed, but Ookla had responded saying additional steps are taken to ensure test results are accurate. Please elaborate on the testing methodology in detail.

Suttles: Due to limitations in the Android operating system, the “active carrier” displayed in the Android Speedtest application does not always indicate the actual data provider in devices with multiple SIMs. No matter what is displayed, the data that we analyze  is attributed to the correct operator.

We further assure the correct operator by applying data sources and mechanisms during post-processing. For example, we match the connection IP address recorded during the test to known carrier IP blocks. This enables us to determine the actual data carrier with a high degree of confidence.

Suttles: Yes, we do have that information and intend to publish additional analysis on the Indian market in the coming months. India is one of the most dynamic markets in the world, and we look forward to further analyzing the performance of India’s internet.

Digit: What are your learnings about Indian network providers versus international providers?

Digit: What are your thoughts on India's growing digital economy? Do you see more opportunity to grow Ookla's presence in India in the coming years?

Suttles: We find historically that as networks improve, people use the internet more and more. With the rise of 4G in India and increasingly competitive offerings for consumers, I think we will see more people curious about the speed of their internet connection who take a Speedtest more frequently.

Digit: Can you share some statistics as to how many people in India use Ookla's Speedtest on a daily/monthly basis?

Suttles: In Q2-Q3 of this year, 80 million tests were actively taken with Speedtest in India by 15 million unique users.

Digit: What are your thoughts on India's official speed testing service - the TRAI MySpeed app? Do you think the data provided by the regulator's app is more accurate than yours, given that the two services showed contrasting test results during the Airtel speedtest controversy?

Suttles: We stand behind the accuracy of our test and methodology one hundred percent. The number of data points we receive from people using their internet in real-world situations is unparalleled. Furthermore, at last count we have 439 testing servers in India. This is critical because it ensures that everyone is able to test to a local server no matter where they take a Speedtest in India, which delivers the most accurate results possible. We’re also pleased to have had the opportunity to speak with TRAI about our methodology, and look forward to collaborating further with them in the future.

Digit: How do you see networks evolving in India in the era of 5G? What are some of the steps needed to improve connectivity and network performance in the country?

Suttles: The best things operators can do to improve network performance are to invest in infrastructure and to consider recent technologies like carrier aggregation. This is particularly true in areas with high population density where many people are using the internet at once.

Digit: Have you seen average speeds go up across Indian mobile data and broadband networks, is it at same pace as global networks?

Suttles: Broadband speeds have shown the strongest improvement over the past year; mobile speeds are increasing at a slower pace. You can see those trend lines from the past year using the Speedtest Global Index.

Digit: What impact do you think Jio has made to the Indian mobile data sector, from the perspective of increase in average data speeds?

Suttles: We have always commended Jio for increasing access to the internet with their rollout of free 4G LTE in September 2016. This access also increased competition in the Indian market. As we have seen in other markets, increased competition of offerings leads to investments in faster speed across the board. Consumers benefit overall when operators compete to provide the best speeds and deals

Doug Suttles, CEO & Co-Founder of Ookla, sheds some light on the internet use in India during the pandemic
Starlink is now sending out government mandated pre-order refunds in India
Elon Musk's Starlink too fast for Indian bureaucracy, will need a license to operate in the country
Advertisements