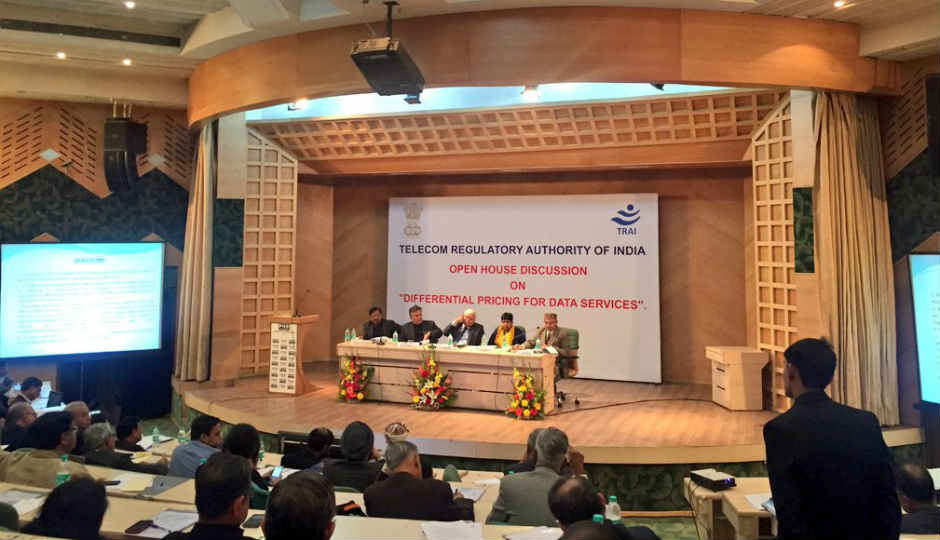 "If I as a Telecom want to offer my content for free, I should be able to do so." - Tata Communications

"Price differentiation happens in the airline industry also and the industry has expanded because of it."- Telenor

"What people are saying about differential pricing is Bullshit!" - IAMAI

The above quotes can be best described as just an excerpt from the Open House on Differential Pricing organised by the Telecom regulatory Authority of India.

Yes, the internet divide exists. It cannot have gone unnoticed by most of you who are reading this right now, that our country stands at the brink of the next level of the Internet. The evolution of online startups, the mushrooming smartphone industry and the Government's push for a digital society, have all led to this moment, right here. The turning point of internet services in India and India, as of now, stands divided.

Free Basics, the free but selective internet access service by Facebook, has sparked a debate that may just have been a problem that we would anyway have had to face in the future- The problem of putting a price on the internet.

The crucial decision on differential pricing for data services still looms under a cloud of uncertainity, followed by the larger issue of India's digital future. TRAI's open house was a glimpse into how we as Indians would access the Internet in future. As of now, the house as well as its people stand utterly perplexed (or so it seems) about the future of our internet services. This is what they had to say-

Facebook
The centre of attention, the one to watch out for, the initiator of this whole debate - Facebook took the clean way out when asked to speak at the open house for differential pricing. One would expect another push for the cause from the company, but at the event, Facebook seemed content with its earlier submission to TRAI, and a company spokesperson said, "As a company we are committed to Free Basics." Whatever the reason may be for Facebook to stay mum, it surely creates an unsettling feeling that the decision on Free Basics in India might have already been taken, and that a citizen opinion poll might just be the soft cushion before the big blow. Nevertheless, what heated up the atmosphere on that cold winter day was the collective plea by telecom operators for a nod on differential pricing.

This was Sharma's attempt at comparing the airline indutry to the telecom industry. Although, if one was to actually compare the both, consumers have an option of not taking a flight and can take a train, or a bus, instead. But, in case of the telecom industry, one really has two options - to have a mobile connection, or not to have one. Sharma went on to say, “Data growth is happening in India becuase the telecom industry's attractive service offerings.”

Other telcos like Airtel, Vodafone and Videocon were also seen in support of differential pricing for data services. Industry bodies COAI and AUSPI, which had made a joint submission to TRAI's consultation paper, were also (obviously) in line with the telcos. Next up, it was time for the Net Neutrality supporters to speak up, and that's exactly what they did.

Internet Activists
Save the Internet and Medianama have been two prominent organisations defending Net Neutrality in this ongoing debate for differential pricing.

“The internet is not a two-sided marketplace. Amazon and Uber are marketplaces, but the internet is not. On the internet, everyone is a producer and everyone is a consumer. Telcos think they are a single entity and are acting exactly like one.” This was the opening statement by representatives of Save the Internet. The organisation went on to describe a study done in European markets, which found that Zero rating plans actually push up the cost of data services rather than reducing them. This was a direct jab at the telcos push to create another avenue for added revenue thorugh differently-priced services.

The Centre for Internet & Society pointed out a larger problem that globally, internet service providers have divided the internet, and undocumented experiences of users suggest that preferential treatment is given to certain websites when it comes to browsing speeds.

Osama Manzar, Founder & Director of the Digital Empowerment Organisation, stressed on the fact that it is a national emergency to provide last mile connectivity to Indians. He pointed out the lack of connectivity in rural areas, and challenged telecom operators to expand their reach to each and every Indian. Manzar also raised another important point that if consumers are already paying to access the internet, why should they pay more to access selective services? Something for TRAI to think about, for sure.

Content Providers
If differential pricing for data services is allowed, one of the biggest impact on revenues will be felt by the content providers, becuase naturally, telecom operators will want to push out their own content on their own services. This would create a content divide in the Internet, and the content providers wouldn't have it. Star India argued that this could create a backdoor entry for telcos to enter the content space. Times Internet Limited was of a similar view and argued that innovation is not the mandate of telecom operators but that of content providers.

What can be gathered from the above statements is that, if passed, differential pricing could create a serious barrier between content providers and the telecom industry, resulting in a loss for the consumer.

Startups & Entrepreneurs
Paytm's Vijay Shekhar Sharma was one of the prominent voices speaking on behalf of the startup space. He, along with a handful of other enterpreneurs present at the open house, strongly opposed to the idea of differential pricing. It is a collective opinion of the startup industry that they don't want ISPs and telcos to become the gatekeepers of the Internet, and alternative methods should be used instead of creating market players for the web. It should be noted that India has a large number of startups that depend on the Internet to offer services. If preferential treatment is given to established players like Flipkart or Snapdeal, smaller startups will suffer from a consumer outage.

Developers
Developers who have already registered for Free Basics in India were almost absent at the open house on differential pricing, except for one. Mathew De Beer, Program Manager at Operation Red Alert, was in attendance and in favour of differential pricing for services like Free Basics. De Beer's organisation focuses on upliftment of women and children and at the event, he told Digit, “Our websites on Free Basics is called My Rights, and is there to empower women. Free Basics should be able to continue as a free service since women in villages don't have access to data.” Mathew might have been a minority in the house, but he did have a strong point to make. If free educational services want a free internet platform for dissemination of information, they have no choice but to sign up with services like Free Basics. We don't know how serious TRAI was while listning to his comments, but such initiatives do need a platform to expand their reach.

With that, we came to an end of the TRAI Open House on Differential Pricing. The regulatory body had absolutely nothing to add to these comments, except for the fact that the deadline to submit additional comments is now extended till January 25. TRAI is expected to come out with its recommendations by the end of this month, and clearly, they have a big task in front of them.