So, what's the deal with net neutrality? If you’ve been plugged in to social networks over the past month or so, you must have spotted some of your friends share or talk about articles on net neutrality. And while I assume many of you understand the concept in question and have already formed opinions, there will also be some of you out there who’ve got no idea what everybody’s on about. If you fall in the latter category, then I’d also assume you have a few questions, questions such as:

So, to help you better understand the ins and outs of net neutrality, let’s tackle these questions one by one.

What is net neutrality?

If net neutrality was to be defined in a single line it would go like this:

“The premise of net neutrality is that all data on the Internet should be treated equally.”

Expanding on the above, a more comprehensive definition would be:

Let’s now break up the above definition for the sake of clarification:

Preferential treatment: This means that ISPs can’t ask some websites, online services or apps to pay extra in order to make it easier for consumers to access them. For instance, Airtel shouldn’t be allowed to take money from Flipkart and then let Airtel broadband and mobile Internet customers load the Flipkart website faster, or scrap all data charges when the Flipkart app is being used.

Discrimination: Conversely, an ISP shouldn’t be allowed to penalize websites, online services or apps because they haven’t paid extra charges. Continuing the same example from above, Airtel shouldn’t be allowed to put competing e-commerce websites like Snapdeal or Amazon at a disadvantage by giving Flipkart a boost just because Flipkart paid up. Also, while currently this discrimination may only come to life in the form of advantages given to companies that pay the ISP, it’s not very difficult to imagine a time when certain websites and apps are made unusable or entirely blocked on certain networks just because they didn’t pay up.

Why should I care/know about net neutrality? 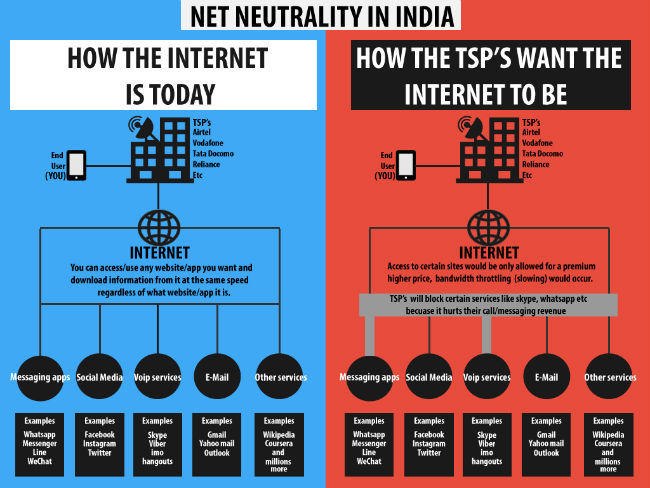 If you use the Internet in any shape or form today, net neutrality affects you directly. If the Telecom Regulatory Authority of India (TRAI) takes the side of telcos and ISPs in this matter then you will see a considerable change in the way you visit websites or use apps. One of the darkest possible future scenarios in this timeline would be to have the Internet divided up into slices of websites and services, similar to how your DTH provider offers channels. According to this timeline, you would have to pay extra on top of your recurring Internet plan to access certain websites or services.

On the other hand, if we are to take an optimistic (albeit unrealistic) view of the intents of the ISPs and telcos, then in a country without net neutrality we could see the most common and popular apps being completely free to use with respect to data charges and the overall cost of data use falling because ISPs no longer have to only rely on the end user for revenue. As I said, it sounds unrealistic.

Nevertheless, wherever you stand on the debate, it’s clear that net neutrality does directly affect you and as a result, you should know and care about it.

Even though everybody and their grandmother supports net neutrality, is there a contrarian viewpoint?

As it always happens in a debate, net neutrality is being both derided and defended by different parties. And even though it may appear like net neutrality has received universal support, it is important to understand the other side of the debate as well.

But first, let’s take a quick look at why net neutrality is being defended:

1. Without net neutrality, it would be very easy for ISPs to mould the browsing habits of its users with the help of pricing slabs, different speeds for different sites and other methods. So, if Airtel wanted its users to visit Flipkart, it would make it exceedingly easy and advantageous to do so and put competing sites on the back foot which would clearly be an anti-competition move.

2. Net neutrality also ensures that small, new companies can compete against established big names on the Internet fairly. If net neutrality did not exist then big companies would shackle their competition with the implicit ability to be able pay more to the ISPs to ensure better service, something that most start-ups wouldn’t be able to do.

3. Now, this scenario may lie at the furthest end of the slippery slope, but here it is: since the absence of net neutrality could mean that an ISP will get money from companies, that relationship may be enough to compel the ISP to mute online criticism against one of its paying partners.

4. Another scenario that exists without net neutrality is that the Internet becomes a stratified mess and you’ll be forced to choose packages of websites and services like you do with your DTH subscription. If you want unrestricted access to the Internet, the ISPs could force you to pay through the nose. 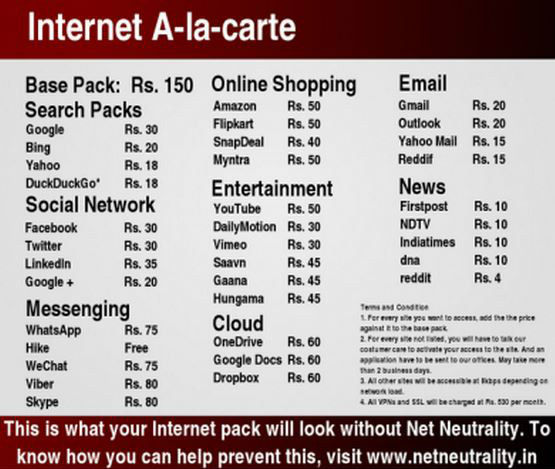 5. The anti-net neutrality arguments become even more vociferous when it comes to VoIP and messaging apps like WhatsApp and Viber. Since these services directly affect the telcos’ bottomline, there is the significant possibility that the companies behind these apps will have to register for licenses in order to conduct operations in India. This means that unless the companies behind messaging and VoIP apps decide to pay the government for licenses, you won’t be able to use them. These are only a few of the many arguments that net neutrality proponents put forward in defence of keeping the Internet neutral. However, when we get to the debate against net neutrality, the focus of the arguments is markedly different. While the pro net neutrality talking points almost always have the consumer as their focal point, the other side of the debate seems to be focused on the telecom operators and how a ‘neutral’ Internet ensures financial doom. In fact, TRAI recently published a consultation paper that almost exclusively focuses on how many VoIP services, apps and websites are taking undue advantage of the infrastructure set up by telcos who spent bucketloads of money setting it all up. It’s a long paper but even if you just skim through it, this theme jumps out at you. 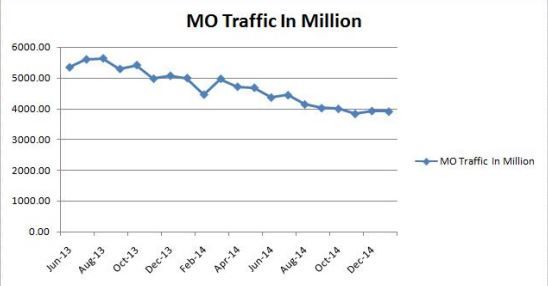 A graph from the TRAI policy paper that shows drop in SMS use.

The fact is that in order to support dismantling net neutrality, you have to believe in the telcos’ claim that without earning revenue from VoIP services and websites like YouTube, they will be forced to either pass on huge costs to the consumer or to accept massive losses.

A graph from the TRAI policy paper showing dropping growth of voice calls over mobile & increasing growth of VoIP.

Apart from the arguments that are in line with the above, let’s take a look at some of the other talking points put forward against net neutrality:

1. ISPs argue that they can increase the overall efficiency of their networks if they’re allowed to ‘actively’ manage them. This means that ISPs can decide how to shape Internet traffic so that heavy Internet users don’t affect the experience of light users. ISPs also claim that this will allow them to give preference to certain types of online services that are necessary and should be prioritized, such as communication channels used by hospitals or emergency response services during a disaster.

2. ISPs also argue that adopting a blanket net neutrality policy will give rise to security risks and increase piracy and cyber crime. ISPs claim that the only way they can help the government to police the Internet better is if they can manage it.

3. One of the more ideological arguments against net neutrality is that it will give too much power to the government organisation that will be responsible for enforcing net neutrality. Some net neutrality detractors have argued that it’s better for user privacy and competition if the ISPs themselves manage the Internet rather than letting a governmental body have control.

It may be simplistic to say so but it does appear that the anti-net neutrality stance basically boils down to one point: You should implicitly trust the ISPs because they will always have your best interests at heart. Now, whether you agree with that statement should tell you where you stand on the net neutrality debate.

There is, however, one aspect of the telcos services, which goes against net neutrality, that appears worth considering, especially in a country like India. I am specifically talking about a service like Internet.org which could work as a great tool to increase Internet penetration in rural areas and places where Internet use is often looked at as a luxury. Under the Internet.org service, Reliance mobile users will be able to access 38 websites for free, including popular ones like Facebook, Facebook Messenger, Wikipedia, NDTV, Aaj Tak, BBC, Cricinfo, Bing and OLX. Yes, it does seem like that list was drawn arbitrarily but it can’t be denied that these are very popular websites. I cannot in good conscience say that someone who couldn’t afford to use the Internet shouldn’t get to do so in whatever capacity. Do I wish services like Internet.org offered more choice or even let users pick the websites that they’d want to access for free? Yes, that would be ideal but I’m also aware of the economic realities. If the scope of services like Internet.org is focused towards increasing rural Internet penetration and awareness, then I can’t really argue against it, not when I have easy access to the Internet at relatively decent speeds while many others don’t.

The debate over whether services like Internet.org flagrantly violate net neutrality and their efficacy in helping bridge the digital divide in Internet starved areas of the country has been wonderfully talked about over at Medianama.

Isn’t net neutrality an American problem? Why should it matter here in India?

It’s true that net neutrality first blinked on our collective radars when it sparked a debate in the US, but now the debate has reached our shores in a big way. With the recent revelation about Airtel Zero, and how it would make certain websites freely accessible, the debate has become even more important. Indian Internet policy is still young and malleable and this is a very important time to help shape it so that it continues to open and democratic. The net neutrality debate is integral to the policy framework that will govern the Internet in India and it’s very important that we help it manifest in a form that’s fair to everyone currently on the Internet and those aspiring to be so.

Digit stands for net neutrality and we hope we’ve helped you understand both sides of the debate in order to help you make up your mind on where you stand.