Wake up and smell the inequality 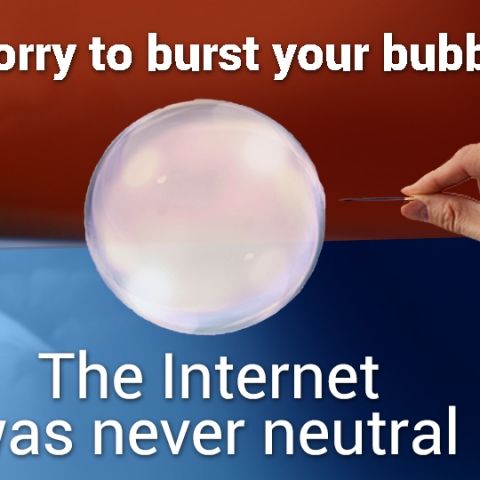 You’d have to be living under a rock to not be aware of all the hullabaloo surrounding this Free Basics thing. Personally, I don’t care whether Facebook wins or loses, because I know India loses no matter what. Neither side really cares about anything but making money or a name for themselves.

This is 2016! Too many of us are sitting around planning our technology purchases for the year, making a list of which companies we will throw money at, whilst playing armchair critic by telling those same companies that they shouldn’t give reduced connectivity to poor Indians (who we don’t know anything about), because that isn’t acceptable by our rather high standards. “It’s against neutrality!” we scream at our screens, while we waste more food today than some of these poor people will eat in a week! Well, I’m pissed off enough about this to want to pop a few bubbles.

The net isn’t neutral. It never was.

Wake up. Smell the rubber that all of these companies have burnt when zooming ahead while you sit here on your ass in neutral, going nowhere!

The net started in the US. It wasn’t neutral then because it was geographically locked. Then it spread to more places, but it was locked in by high costs associated with owning a PC to get online. When that ended, it was (more) expensive smartphones, now it’s differently priced data plans. All barriers that have prevented a poorer section of society than the ones online already are gradually overcome, and that’s how it should be. If the net was free to all, a basic right, then it would be neutral. With more than half of the world still without any access to the web whatsoever, there’s nothing neutral about it, yet. Poverty isn’t going anywhere, so if you think that just by making bandwidth cheaper you can get 100% online, you were probably dropped on your head as a baby.

Different countries have different norms. On a visit to Singapore, I got a tourist SIM that had a 100 GB data limit. Yes I read that figure many times too. 100 gigs on a phone, with proper 4G speeds, for a measly Rs 750! You call that neutral? At a friend’s house I did a speedtest and got 120 Mbps down, 60 Mbps up. He has a very standard plan. Singapore also has Facebook-only, WhatsApp-only, etc., plans for cheap, so not exactly a beacon for neutrality.

You search for videos on Google, the search results are predominantly from YouTube. You try and send a Telegram link to someone on WhatsApp… doesn’t work. Videos from YouTube load so much faster than any other site, because most ISPs have YouTube caching. Google searches are almost instant because they have server farms and hardware all over the world, most probably inside your ISP’s data center as well. A process they call peering. This is neutral?

Do you think you can compete as a startup in any of the established fields? Really? You think big companies want to change the status quo and risk upsetting the apple cart? This version of the internet that still has cost barriers for adoption of a much poorer section of society actually works well for them. Your search startup is never going to match Google in terms of efficiency or speed, or anything really. You may have a way better algorithm, but your best hope is to be noticed enough to get bought over by Google and assimilated. This is neutrality?

Every site, every forum, everything you do online is not neutral. Wikipedia Editors are superior to you or me. On the Digit forum we have moderators who have “power”, ditto for every site with user interaction. I could disable comments on this piece to stem the hate I presume is coming – I won’t but the fact that I could means things aren’t neutral.

Last month in our magazine’s cover story, we told you about disruptions, and how they cause established companies to falter and new startups to blossom… this only happens when something fundamental that we take for granted changes. Perhaps the inventor of the Facebook killer will get online using Free Basics. Now wouldn’t that be ironic?

You need to let go of this notion that the internet is in the best form that it will ever be in. Neutral is relative, like everything else in life. Today’s neutral is tomorrow’s backwardness. The current accepted norm of how we treat our poor will seem savage in a decade. Things change, and there is merit in trying to keep the internet open, or trying to make it free, or a basic right, etc. But if you still think the net is neutral… well, it looks like your bubble is pin-proof, but not prick-proof, because there’s already one inside it...