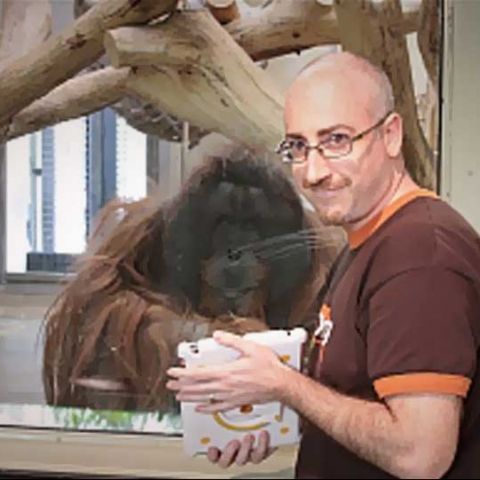 The iDevice isn’t limited to humans anymore! In an extremely innovative initiative, the Redapes organization is now deploying Apple iPads at various zoos across North America. The idea is to possibly create another medium by which the apes can communicate, and evolve that into something bigger, if the orangutans do like it! At the moment, activities include getting them to identify objects shown on the display, use FaceTime for dates (!!!) and even choose what they want in the next meal. The initial indications seem to be good, because the apes particularly the young ones, are taking to the device with a lot of excitement. Mr. Zimmerman explained how they are looking to expand on this idea, and their plans on building this into a medium of interspecies communication.

We spoke with Mr. Richard Zimmerman, Director @ Orangutan Outreach about how the concept came into being, how the apes are taking to the idea, and how this can be expanded further. Some may argue that this does not affect our daily routine or our lives, but the idea and concept seem too interesting to ignore. Read on to know more.

Q. How did the idea of giving iPads to orangutans come about? How well have they been received? We are sure the young ones are very excited!

The original idea came when I was watching Steve Jobs give his introductory presentation of the iPad. When I saw the close-ups of his fingers on the iPad I thought to myself-- "This is perfect for orangutans!" Orangutans have used touch screens before in several facilities. â€¨In general, the female and young orangutans are very interested in the iPads and see the devices as something 'new' that needs to be explored. The big males tend to shy away from it-- as if they sense it might be 'dangerous'-- like a vet with a syringe. From what we've seen, the males eventually overcome their nerves and approach the iPad. This was especially true in Milwaukee, where Tom (the big male cheekpadder) stayed away at first but eventually came to enjoy paying on the iPad. His keeper, Trish Khan, has in fact noticed a change in his entire demeanor. He seems much more relaxed now... and he's less shy about coming to the glass when zoo visitors are present.

Q. What kind of apps have been deployed for the orangutans to use? Are these custom applications? Please give us an idea of how they work.

Mainly simple apps-- drawing, playing music, tapping on moving objects, etc. We are first introducing them to apps that mimic their physical enrichment items, such as finger-painting. Different zoos are experimenting with various apps and we are slowly gathering data. â€¨We do not have any custom apps yet, although this is the direction we want to go. Once we have more info on what works, what doesn't, what the orangutans enjoy, etc, then we can start to tailor this information to make ideal apps. We have had many developers offer their assistance for free.
We are still dealing with simple hurdles like getting the orangutans to use their fingertips or knuckles instead of their fingernails. The big males have huge thick nails hooking around their fingertips. Also, since the orangutans are not yet holding the iPads (for health and safety reasons) we are limited to apps that don't require moving or shaking the iPad.

Q. Where all has the Apps for Apes deployed this unique idea? Can we expect things to happen at locations around the world in the near future?

Milwaukee County Zoo,  Toronto Zoo, Center for Great Apes (in Florida), Houston Zoo, Utah's Hogle Zoo, Zoo Atlanta. Coming soon: National Zoo in Wash DC, Oregon Zoo, Auckland Zoo in New Zealand.â€¨We will expand overseas as resources allow and other facilities show interest. We are also hoping to expand to Spain and France soon. As with anything in IT, geography is not really a barrier, but having wifi connections and access to adequate hardware are a problem!  To that effect, Orangutan Outreach is NOT spending funds on the project. All our funds are designated for our conservation efforts in Borneo. Only funds specifically earmarked for Apps for Apes will be used for the project. We are relying on donated iPads and app store credit.

Q. We have read that orangutans communicate their mean menu using the app! What are the other areas of communication where the iPad app has been deployed?

They can identify their menu items by icon and tap the correct pictures. We would eventually like to get a system in place with which the orangutans can actually choose their snacks (given a pre-set calorie count) from various combinations. So, for example: An apple and 10 grapes. Or 2 apples and no grapes, etc. We want to be able to give the orangutans the opportunity to make as many choices as possible in the course of their day. For any creature in captivity-- including humans-- being able to make choices and have a say-- however small-- in one's destiny is a key to better living. We would also like to give them the ability to choose their enclosure via iPad when there are multiple areas for them to roam in.

Q. Are there any limitations that the orangutans face with regards to the hardware and the application? Can these be overcome?

There are several limitations. We still can't let them hold the iPads. It is just too dangerous. They would most likely take them apart or break them, but this isn't the main worry. Rather, it's them opening them up and ingesting something hazardous or having them choke. Orangutans are very curious and explore everything in their world down to the minutest detail. We simply cannot risk allowing them to hurt themselves. It would be wrong on every level.â€¨We are also limited b/c the keepers still need to hold the iPads. We may be able to overcome this by embedding them in large mobile cases, but this will also prevent them from doing a lot of things. We're hoping that with enough media attention we will be able to come up with unique solutions such as wall-mounted screens (using gorilla glass) and military-grade casings. Making something orangutan-proof, however, is not easy. A 3-year old orangutan will always have his way!

As mentioned, their big fingernails can get in the way! Somewhat related to this, the size of the icons on the screen is an issue. Male orangutans have enormous fingertips. Their hands can easily be more than twice as large as ours. So for them it's like when we try to play detailed games on an iPhone. It can be hard to navigate.... and frustrating!

Another issue is wifi availability. We are finding that most zoos are not equipped with wifi, so we need to wait for them to get it hooked up or come up with work-arounds. One by one they are all coming online...

Q. Is it possible that with the help of this application, we could see humans communicating with orangutans?

Yes! Just to be clear, Apps for Apes is meant to be enrichment for the orangutans, but there will be plenty of research coming out of it. We are involved in a separate project dealing with interspecie communication and IT. We will be discussing this in coming months.

We are now experimenting with what we are calling 'Primate PlayDates'. We've successfully tested FaceTime between the orangutans at Milwaukee County Zoo and the Toronto Zoo. It was brief and choppy, but it worked! I have been saying: "One small step for man, one giant leap for orangutans!"

Q.  Extremely innovative idea at the moment, and how do you see this developing in the future? Can this idea be implemented elsewhere, like for remote medical assistance?

Many of the same applications of the technology for humans can work for the orangutans-- including veterinary interventions between facilities and even reaching back to the rescue and care centers in Indonesia.â€¨â€¨We will expand on the Primate PlayDates. We are now bringing chimpanzees into the program via the Center for Great Apes (sanctuary for both orangutans & chimps).
We will build out the orangutan social network...  but we need more camera-enabled iPads to really get it going...

While some may find orangutans tapping on iPads funny in a sarcastic way, but it is laughing matter. Orangutans are critically endangered in the wild because of rapid deforestation and the expansion of palm oil plantations into their rainforest home. If nothing is done to protect them, they will be extinct in just a few years. Our forests are in danger, with most species in serious danger of extinction, and probably, with technology, we can help a bit.

In the meantime, you can enjoy a photo-gallery of the iPads in action at the various centers where the apps for apes program has been deployed.