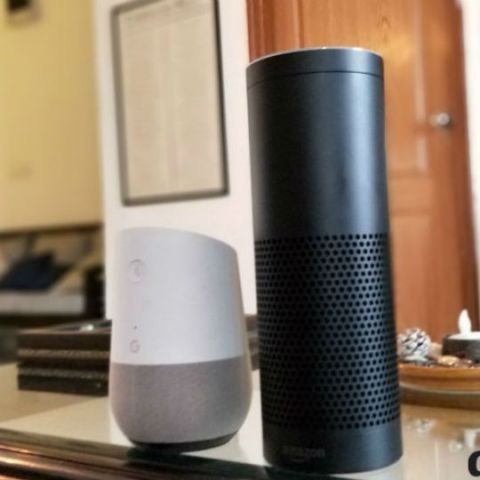 After a gap of almost two years, Google finally introduced the Home series of smart speakers in India last week. The Google Home and Home Mini are direct competitors to Amazon’s Echo and Echo Dot smart speakers which were brought to India in November last year. The smart speakers from the two competing tech giants are also priced similarly in the country - The Google Home competes with the Amazon Echo at Rs 9,999, while the Home Mini and Echo Dot rival each other at a price of Rs 5,499 and Rs 4,499 respectively.

If you are looking to pick up any one of the smart speakers in India, it is imperative you know what exactly you are getting for your monies. Helping you make your decision, here are 5 things that the Amazon Echo can currently do in India that the Google Home cannot.

Amazon clearly has the first mover’s advantage when it comes to fulfilling your daily needs. Having launched in India first and after going through a significant pre-launch period of forging local partnerships, the Amazon Echo range of devices offer over 12,000 skills which stitch third-party service providers to its smart assistant Alexa. Skills allow users to interact with third-party services such as Uber, Ola, Jet Airways, Zomato, Urbanclap, etc to complete actions such as calling cabs, ordering food, booking air tickets, and more using voice commands. While you can also talk to the Google Home to bring up information from the web, play music or read out reminders, the Google Assistant currently does not bring support for any third-party ‘Actions’, expect for streaming music through Gaana and Saavn. Google had announced Actions for the Google Assistant last year, but is yet to introduce them India. Once introduced, Assistant’s Actions will work the same as Alexa’s Skills by letting users interact with third-party service providers.

One of the most advertised feature of the Amazon Echo smart speaker and its range of devices is that users can shop on Amazon using simple voice commands. Echo owners can just command Alexa to order items from Amazon. Alexa even keeps track of the packages and the delivery status. The Google Home, on the other hand, does not allow users in India to shop for products online. Not yet at least. It’s not like the Google Home does not support the shopping feature, it just isn’t available in the country for now. Google Home can be used to purchase products from Google’s extensive list of approved Google Express retailers in the US. For the same, users need to setup a payments account for the Google Assistant on the Google Home, however, the option is unavailable in India as of now.

Unlike Amazon's larger Echo Plus smart speaker, the Google Home and Home Mini are not smart home hubs that come with Zigbee or Z-Wave connectivity. Instead, the Google Home speakers link to various smart home hubs and devices using the accompanying Google Home smartphone app. Overall, the Google Home is compatible with more than 1,500 smart devices from over 225 brands. These include smart Android TVs from LG, Sony and other manufacturers. The Home also brings integrations with Nest, SmartThings, Philips Hue, and IFTTT.

Alexa on the Amazon Echo supports a nifty feature called Routines, which lets users automate certain tasks such as switching on/off lights, playing music, etc using a single phrase. For instance, if you say “Alexa, Good Morning”, you can set the intelligent assistant to report the weather, play news from flash briefings and switch on lights, all at the same time. In contrast, the Google Assistant on the Google Home cannot be used to set routines in India. Google recently added Routines to Home and updated the support page explaining the feature, however, it is only available to some users in the US for now.

Another cool feature of the Echo range of smart speakers is that all of them sport an Aux Out port so you can easily plug in your external speakers to the devices. Unfortunately, the Google Home and Home Mini do not feature an Aux Out port, but can be used to connect to other speakers using Bluetooth or Chromecast Audio.

Smart gadgets to make your home a smart home