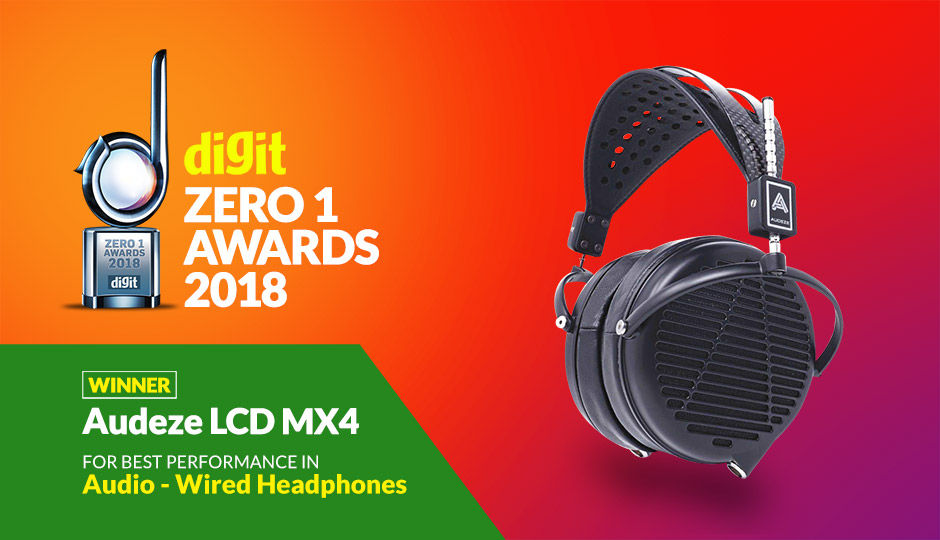 In the headphone vs earphone battle, there are way too many serious, sensible points on either side of the camp for us to take a side. Instead, just like every year, we’ve chosen to bring to you the best of both worlds. This one’s about the wired headphones that encompass your ear in their sound.

There hasn’t been as much of a change in the basic technology that goes into these devices as there has been a focus on better material and build quality. We’ve seen an overall improvement in the type of connectors available, a growing preference for balanced outputs from DAC and DSPs and much more. In the end, however, what gets one the Zero1 award is how they sound when you place them on your head.

It’s great when a manufacturer with a great reputation in audio decides to make a great pair of headphones. But do you know what’s even better? When that manufacturer decides to take two of its best headphones ever and combine their best parts into a new product. The LCD MX4 is, according to Audeze, the ‘lovechild of the LCD4 and the LCDX’ and it is pretty evident that this thing is a labour of love.

The sonic experience with the LCD MX4 is bright, revealing and energetic. Instead of focussing on sheer power, the MX4 decides to immerse you into a well-rounded listening experience that shines right from the lower midrange up to the highest treble. Power by planar magnetic drivers that work with trademarked Audeze technology, the MX4 is also considerably more comfortable compared to its predecessors. That being said, it is a tad bit tiring to wear it for extended durations. But that’s the price you have to pay for sheer audio quality!

While it did come in second, the Ultrasone Edition eleven lost out on the top spot by a fairly small margin. A limited edition piece, only 1,111 of these headphones will ever be manufactured. The unit features a circumaural open back design and uses walnut wood as the material of choice for the enclosure. The 40mm driver does a fabulous job of using the design to its advantage and pushes a sound signature that is airy and bright.

The MX4 could snatch the crown away firmly due to the Edition eleven’s slight obsession with sounding flat and the MX4’s better detail handling capability. However, if you’re don’t really mind weaker lows in your music then Edition eleven could be a great choice for you. That is if you can snag one of these limited edition masterpieces.

The 1MORE Triple Driver Over-Ear headphone was a pleasant surprise in this year’s Zero1 awards. Featuring an impressive build at its price point, the audio performance of the Triple Driver stands out due to its clarity despite leaning a bit towards bass response. The portable build makes it easy to carry around in your bag, and the impressive design will make you want to show them off.

Multiple things make these the ideal entry-level audiophile gear. The low power requirements make a dedicated amp unnecessary. A well-defined soundstage on the 1MORE Triple Driver Over-Ear doesn’t adhere to the usually restricted closed back response. What makes this one lose out is the sheer difference in detailing and balancing that is evident between itself and the more expensive competitors that it’s faced. Even if it did lose out, it did so gloriously.