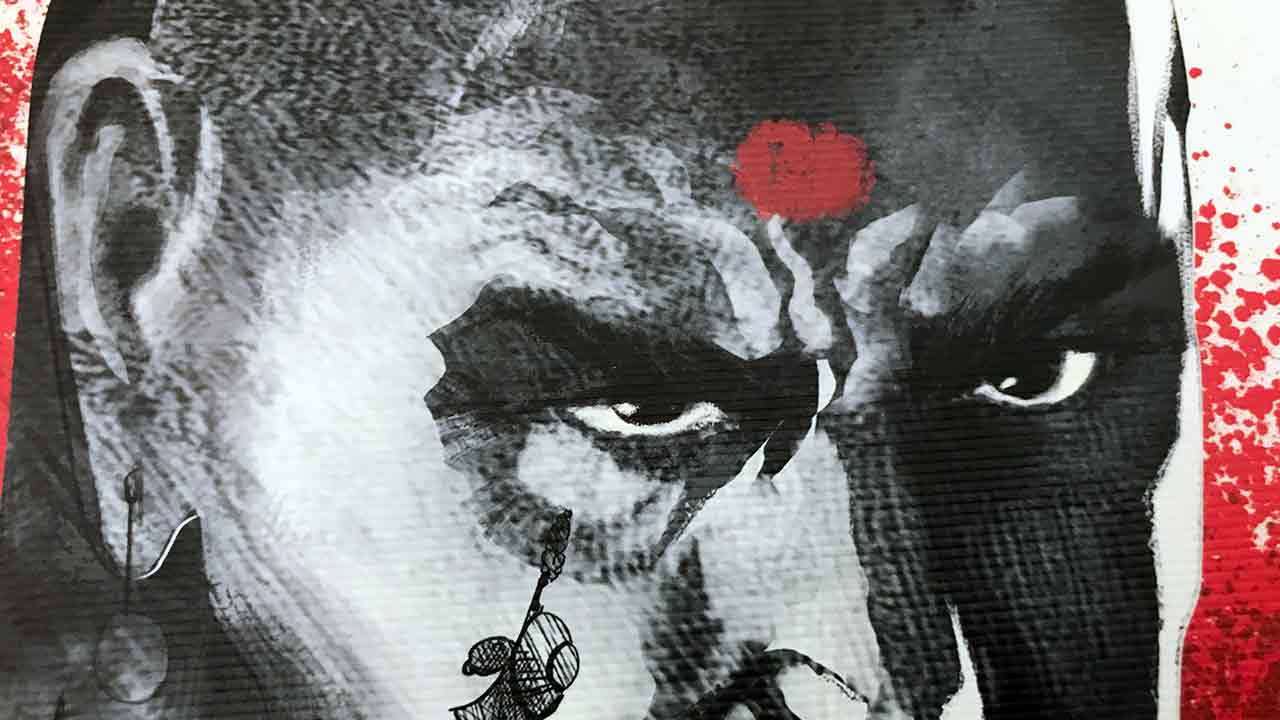 Chanakya: Of Serpents and Kings

This is not a book for the queasy, and many of the themes are pretty mature.

Chanakya: Of Serpents and Kings is a graphic novel by Campfire that tells the story of the advisor to king Chandragupta, at the time of the ascendency of the Maurya empire. This book is instantly attractive to anyone with even a superficial interest in Indian history, and it dives right into the psyche of one of the most enigmatic figures in ancient India. 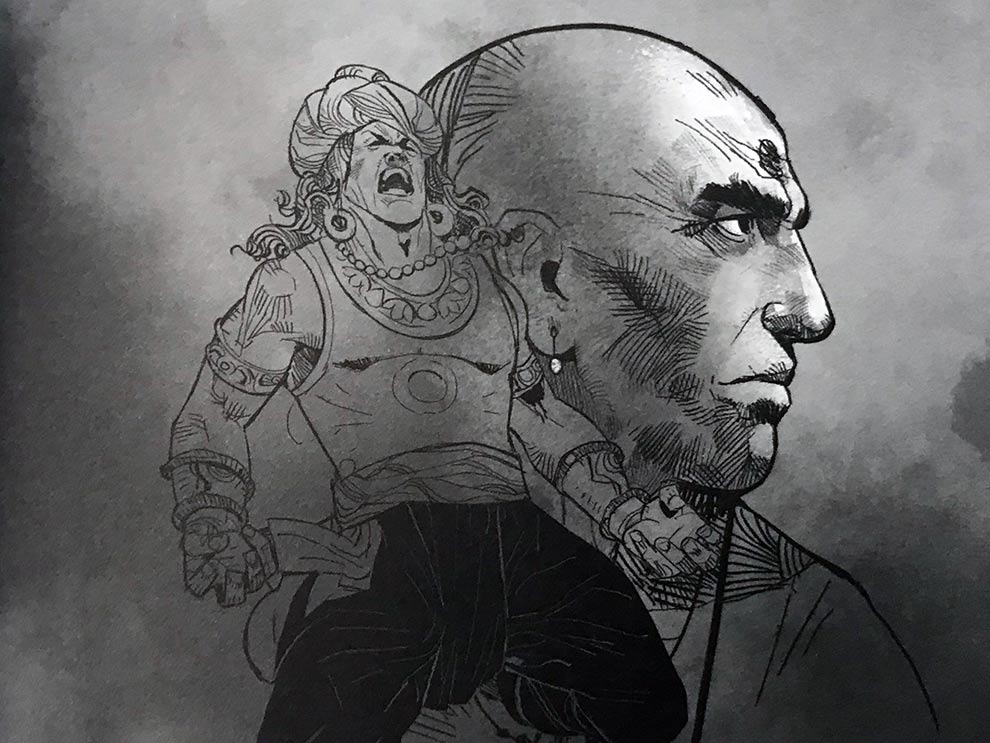 This is a black and white novel, but that does not hinder in the immersion or the experience in any way. The artwork is pretty fluid, with the lines being used effectively to convey different things at different times. While the details in the background are sparse, they have deeply symbolic significance when they are used. The mood and tone of every panel is created very effectively. Each page manages to convey an emotion effectively, whether it wants to show the characters deep in contemplation, or the development of trechearous schemes, or just brutal cold blooded murder. While there is no outright gore over the course of the book, the hints themselves are graphic enough. The artwork is incredibly detailed, and you can spend hours looking at the finer details, such as the designs on pots or Chanakya’s hair. One of the most interesting things is how the skies are used to convey emotions, it is as if the very air is talking to you.
In very rare panels, there are splashes of colour, which really makes them stand out from the rest, and has the desired impact.
There are a few cityscapes, and all of these seem to be modelled on archeological digs of the Indus Valley civilisation. The architecture shown is for the most part historically accurate for the time period, and avoids glorifying the structures to an extreme degree. However, some of the fortifications do look distinctly european instead of Indian. In any case, Pataliputra is no Mahishmati, which is a refreshing approach. The only disappointing panels are the generic war scenes, which are underwhelming, both in terms of art and story.
When it comes to Chanakya itself, there are some liberties taken with the appearance, but these are actually good decisions. It just would not look good to show a hideous person throughout the book, one with cracked teeth at that. 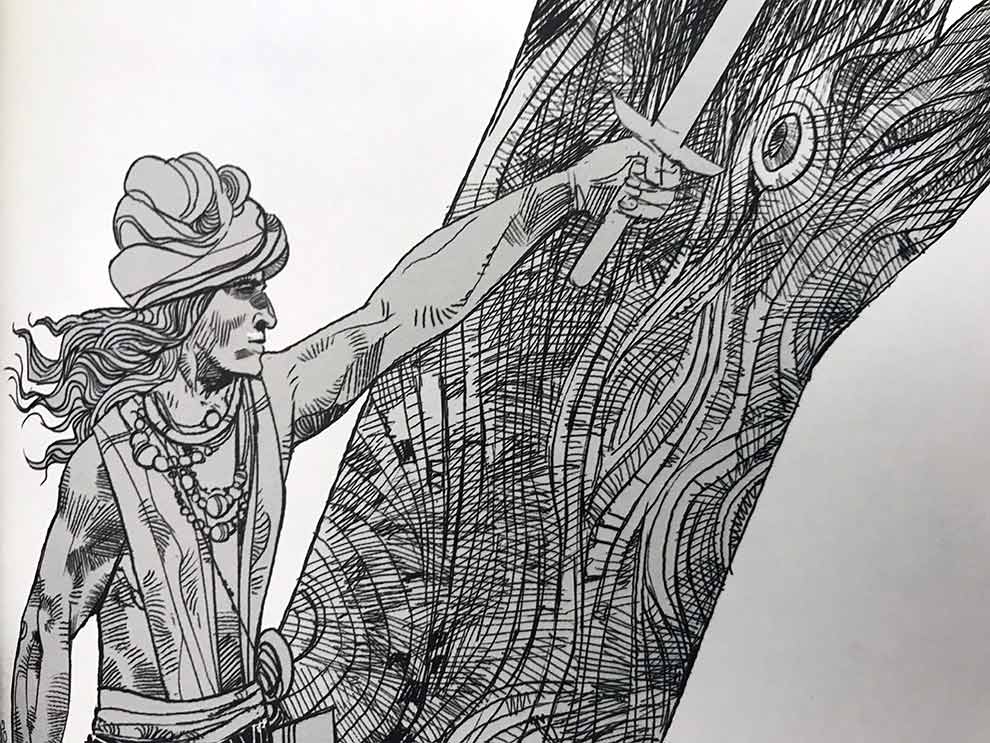 This is a long volume with a lot of meat in it. Every page demands your attention. There is a lot to think about, and processing all of it is not easy. This is exactly the kind of story that you would expect from a book about Chanakya. The general setting is the rise of king Chandragupta, and the defeat of the generals who have been left behind at the borders of India after the failed attempt of conquest by Alexander. There are plots and intrigues amongst the squabbling nobles. In this version of the story, Chanakya first across Chandragupta as an exile. Then follows a five part story of Chanakya first managing to put Chandragupta on the throne, and then making sure that he stays in power. Mostly the story is about the schemes and plots of the enemies, with lesser focus on wars. This shows a dark period from history, where none of the rulers were ideal men who played fair, which does justice to the title of the volume. Chanakya’s own motivations are shown to be altruistic, although his actual actions seem anything but. Chanakya does not hesitate using any means necessary to achieve his goals. The starting of each section has a quote from Chanakya. There is a touching epilogue, where Chanakya is seen writing his Arthashastra, and gives an in universe explanation of why he is called Kautilya. Chanakya seems to be very self aware about how he will be perceived in the future, to such a degree that it falls just short of breaking the fourth wall. There is however, a meta commentary where Chanakya explains himself, which is a great narrative approach for such a book. If you like Chanakya at all, this is a must read. 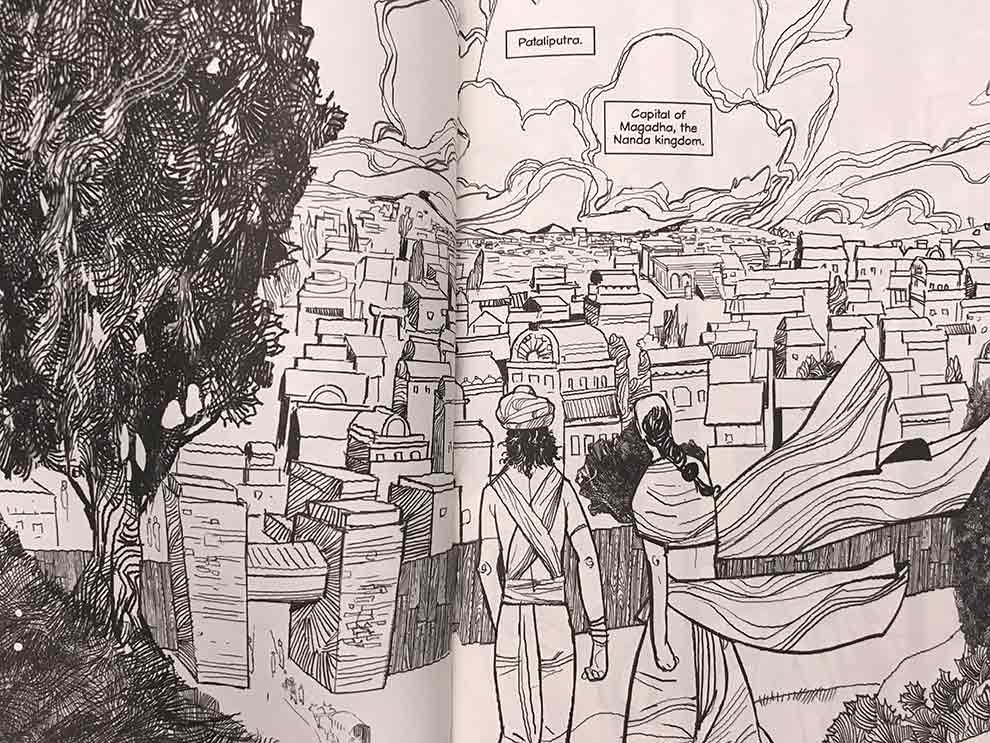 This is not a book for the queasy, and many of the themes are pretty mature. There is a poignant epilogue after the climax, which has themes that can be hard to process. This is a dark and mystical volume, brimming with hints and symbolism, dealing with extremely brutal concepts at the same time. Chanakya is both the hero and the anti-hero at the same time, and the book does not shy away from exploring his dark side. If buying for children, it is good to read the book once before deciding if it is appropriate enough. This is not an uplifting read at the end of the day, but is a rewarding experience nonetheless, daring enough to tackle difficult notions. The book can be purchased from Campfire.