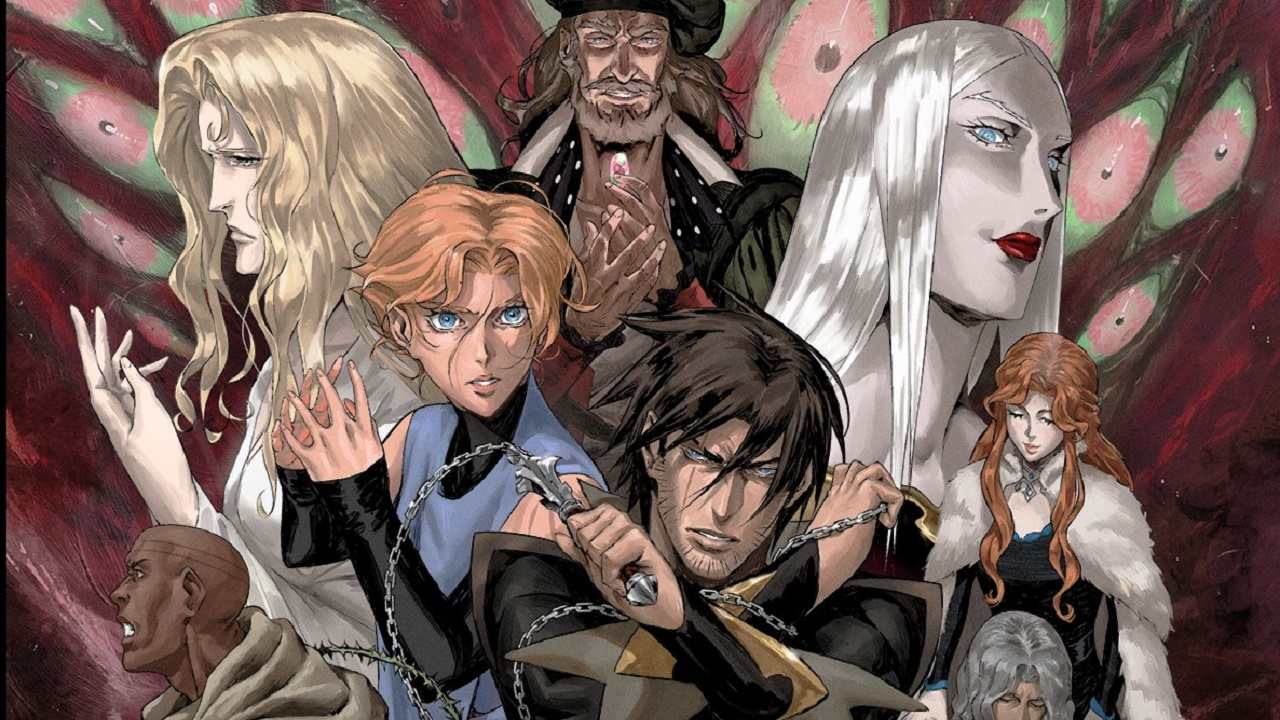 Castlevania was always a show that really caught the attention of the hardcore geek and nerd. It appealed to the anime crowd as well as the gaming community as the series is based on one of the most celebrated gaming franchises of all time. Castlevania, with its violent action and adult, mature themes quickly rose in popularity to warrant 3 whole seasons. Created and written by celebrated comic book writer and novelist, Warren Ellis, Castlevania was a fresh breath of animation in a stale CalArts dominated market. In today’s review, we’ll be looking at the entirety of the third season of Castlevania and how the show progresses after the death of its main antagonist at the end of season 2. 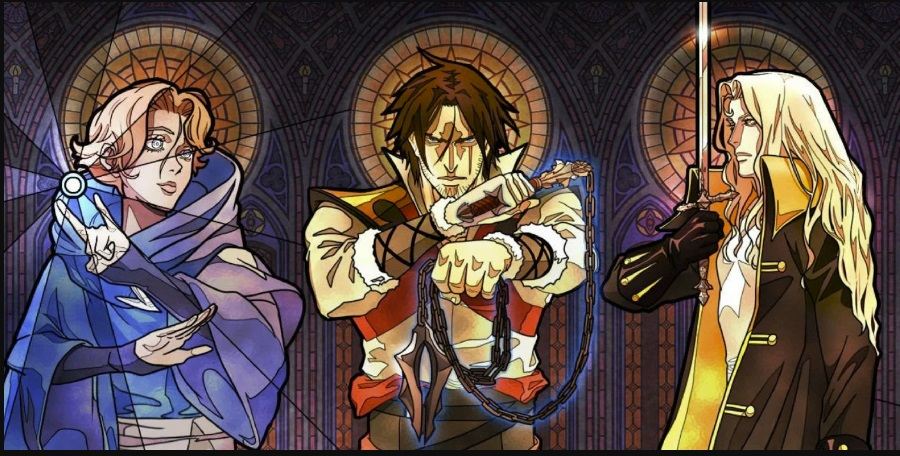 Dracula is dead. At the end of the season 2, we saw Alucard, Sypha and Trevor Belmont lay waste to the castle of Dracula and finally slay the gravely misunderstood Dracula. Alucard drove the blade through his father’s heart and in turn, caused the downfall of the court of Dracula. So, what do you do when you actually kill the main baddie 2 seasons into the show? Well, you actually get to focus on the rest of the characters as well, and that comes as a welcome surprise. Carmilla, the vampire schemer who has tucked tail and returned home after a failed war campaign, Issac, the Forgemaster who now wanders the land with his night creatures. We also see the fate of one Hector, the other Forgemaster who has now been captured by Carmilla. Trevor Belmont and Sypha have now become lovers and are wandering the countryside killing monsters and getting to know each other better. Alucard, feeling the guilt and weight of killing Dracula, his own father, is now content to live alone in his father’s empty castle, resigned to a life of loneliness. 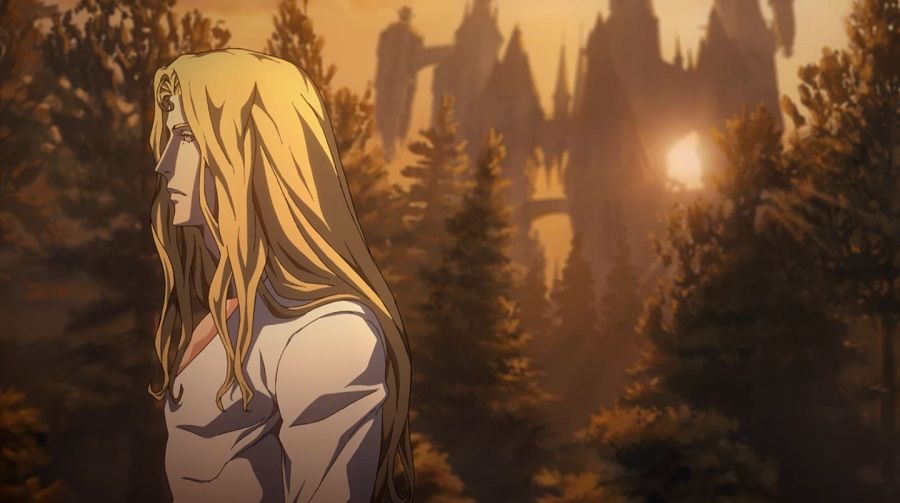 The season begins with the humiliation of Hector at the hands of Carmilla and her four vampire sisters, Striga, Morena and Lenore. After having betrayed Dracula and ended up in the hands and fangs of Carmilla, Hector is being kept alive because of his Forgemaster abilities, namely creating monsters out of dead humans as he is actually quite useful to Carmilla and her plans of conquest now that there’s a power vacuum because of the death of Dracula. Trevor Belmont and Sypha the Speaker have now become more comfortable with each other, both as lovers and as friends. They’re still looking for some kind of purpose in life and wander into a town called Lindenfeld with a few dead night creatures in tow. Alucard is still reeling from the death of Dracula and is now content with an easy life, roaming the halls and corridors of his father’s now dilapidated castle. It’s a sombre start to the season but obviously, things do not go as planned and the next ten episodes are a testament to clever storytelling and stylised action that is more of a cross of Gothic sensibilities and Anime’s kinetic motion. A mash-up of the old atmosphere of Hammer horror and a distinctly Japanese aesthetic. 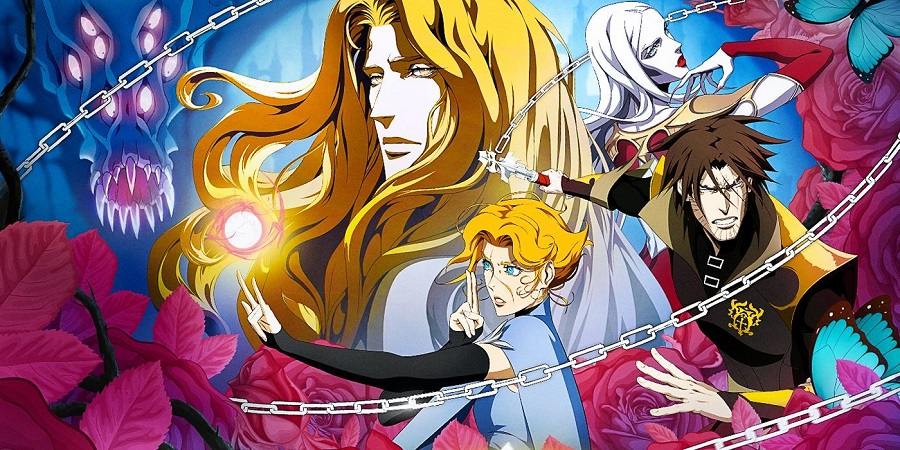 The newer characters that are introduced do a great job of fleshing out the story of the third season and gives viewers different personalities to latch on to. We have the mysterious yet charming Saint Germain who’s story Trevor and Sypha have now stepped into. The introduction of the three other vampire sisters in Morena, Striga and Lenore serve to show how the four vampire sisters work and their relationship to each other. Alucard also meets a brother-sister duo who have come to him for help. This storyline is by far the weakest in the season but it still presents a few different paths for the character of Alucard, so it isn't a total loss. To be honest, though, the most compelling storyline in the entire third season is the tale of the masterless Forgemaster, Issac and his thirst for revenge. His is a tale of vengeance and loss, a story of finding one’s self once the purpose has been torn away from them. His journey from a subservient accomplice to masterless ronin and finally his own man is a fascinating look at one of the more underrated characters on the show.

We won’t spoil anything here so rest assured that major plot points have not been revealed. If you’re even a passing fan of pop culture, video games and even anime, you owe it to yourself to check out the first season of Castlevania on Netflix and go on from there.

Netflix is testing out a new feature called 'Sleep Timer'
Netflix announces fourth and final season of Castlevania, will premier on May 13
Netflix dives headfirst into the anime craze with 40 new shows coming in 2021
Netflix password sharing could soon come to an end, company experimenting with warning messages
Netflix is testing out a Rs 299 Mobile+ plan with access to HD content in India
Advertisements