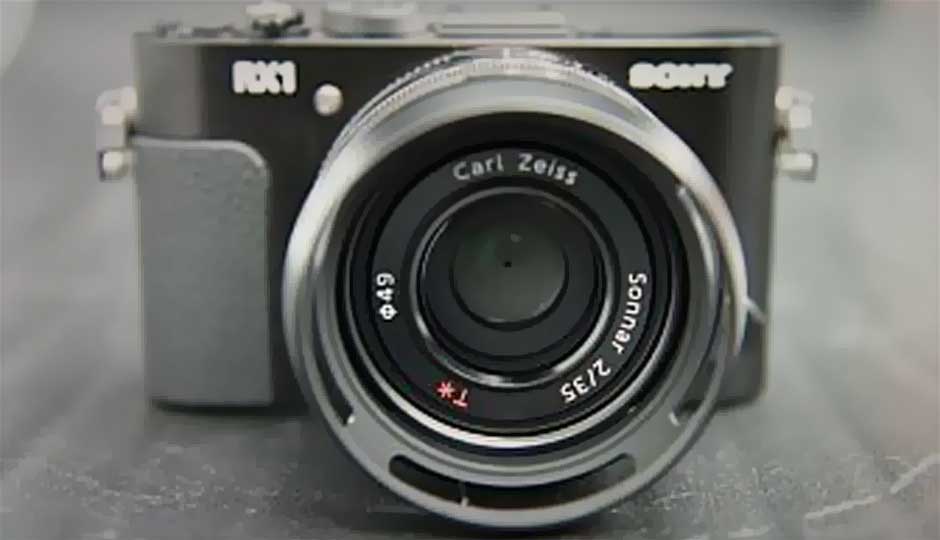 Sony India launched today the Sony DSC-RX1 at the Consumer Electronics Imaging Fair in Delhi. Sony held a special media briefing before the event was opened up to the public, where select individuals got to play with all the new fancy cameras Sony was going to be announcing today.

We made a beeline for the Cyber-shot RX1, which we sighted from nearly 20 feet away thanks to its distinctive orange ring around the lens mount and the signature Zeiss lens hood. If it weren’t for the orange-gold ring, which designates a full-frame sensor on the inside, it would be near impossible to tell that you just passed by a camera that is in many ways revolutionary. The RX1 packs a 24.3 megapixel full frame sensor, the first in a point and shoot camera, along with a fixed 35mm f/2 Carl Zeiss lens with the Sonnar T* coating. The lens is not removable and the reason behind that is that Sony wanted to make sure the camera was as compact as possible, and compact it is!

The Zeiss lens on the RX1 also includes an aperture dial, like the one found on really old film camera lenses and ranges the aperture from f/2.0-22. There is also a focus limiting ring, which changes the focus range from 0.2-0.3 metres to 0.3-infinity. The lens also has a thread for a hood, the hood being an optional accessory and costing a whopping Rs. 12,000.

The camera itself takes strong design cues from the ever popular RX100, but also throws in a few more dials and buttons for better access to manual control and exposure compensation. From the moment we pressed the shutter button on the RX1, we knew Sony had created something special. With the RX-1, you won’t be taking photos, but rather making images. The operation is very intuitive and quite easy to figure out, even if you’ve never used a Sony camera before.

Take a look at the images straight out of the RX1. All images were shot in aperture priority mode with highest JPG settings. No editing has been performed on any of them.

The RX1 is simply gorgeous and for a portable camera, it is THE ultimate point and shoot camera to have. The full-frame sensor spits out stunning images and the lens-camera combination does a very good job of locking focus quite quickly. We didn’t encounter a single incident where the camera failed to lock focus on the intended subject, at least not as long as we worked within the camera’s focusing limitations.

We see only one flaw with the RX-1 and that is its price. If you want to own this nifty little shooter, you’re going to have to shell out Rs. 1,79,990 and even that gets you only the camera. The lens hood, the optical or electronic viewfinders and even the carrying case are all optional accessories with a relatively hefty price tag. However, we do strongly recommend waiting for our full length review of the camera to see whether the RX-1 truly is worth the sky-high price tag.