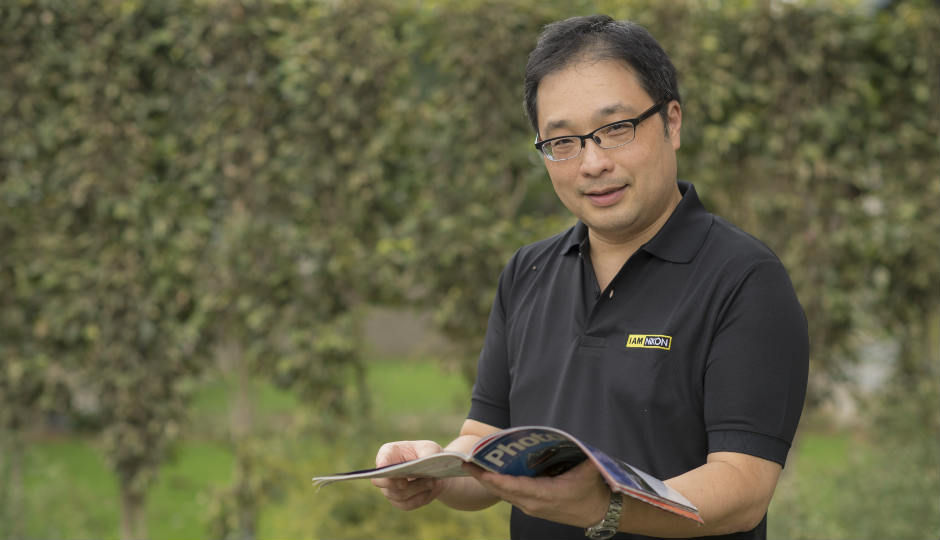 Please tell us about Nikon’s Photo School in India.

With Photo School, our focus is on beginners and photography enthusiasts in India. Last year, we held 1032 workshops all over India, and this year, we are holding 750 workshops across India. The main focus of these workshops remain on Nikon’s FX format of semi-professional and professional cameras. Of course, we also hold entry level workshops with focus on the DX-format cameras, too, but FX is the most popular of the lot.

What are the main features that your consumers are looking for in the FX cameras?

From what I have seen, many DX-type camera users are now shifting to FX cameras like D610 or D750. So many photographers are also evolving in ability and skill, for instance a wedding photographer is now opting for a Nikon D750 instead of D5 as its ISO performance is much higher. The D5, meanwhile, is too expensive for general photographers, but for professional sports photographers it is great, as it has 12fps continuous RAW shooting and so on. In fact, many photographers at the Rio Olympics have used the Nikon D5.

That’s great! Did Nikon have a stall at the Rio Olympics?

Yes, of course. In fact, we had the Nikon Professional Services there. So, professional photographers who are also NPS members could use our equipment free of charge. They were also privy to our best lenses, the 600mm and 800mm, for rent.

Talking about professional cameras, when you set about making a camera like the Nikon D5, you already have something as great and powerful as the D4s. How do you innovate and create a product that is significantly better than before? What are the things that you consider when making a new camera?

So, in comparison, the D5 has 153 AF points, as against less than 100 for the D4s, so we have increased focussing speed and accuracy by almost 1.5 times. Shooting speed has also increased, and so has ISO, which is now over 3,000,000 at extended range. These are the main points that we consider to further enhance the photography experience in flagship cameras. In the Nikon D5, the f-points cover almost the entire frame, and the camera is even faster in autofocus.

Do you think smart features like wireless connectivity and touchscreen make a considerable impact in DSLR cameras?

These features are liked by some, but many camera users are reluctant to use these features, as it may take some time to get used to. But we are making it easier as Snapbridge, the new Bluetooth function of the Nikon D500, can easily transfer photos and much faster also than WiFi, so we are hoping it will be easier for customers to use the camera.

How important do you think these peripheral features are, in a camera?

They are very important, because sharing is important for youngsters, on social networking service. It is almost mandatory in today’s life, which is why our wireless features are more available in the budget cameras too.

But wouldn’t sharing a DSLR photo from a phone be inconvenient, as the size would be too large?

Just for a fun fact, what is the maximum size of telephoto lens that we can expect to see, for DSLR cameras?

What are the main problems that you would face when you make such a large lens?

The main problem is the weight of the internal glass lens, which itself is heavy. Plastic lenses are lighter, but the quality is not as great. The second point is vibration – such kind of long lenses need to have strong vibration reduction system, but that is also challenging for us to make efficiently. And the third, of course, is price.

Moving on to the technicals, what mechanism does Nikon use to maintain such high speed continuous shooting on full frame cameras like the D5?

In certain DSLRs, many companies use translucent mirrors to improve continuous speed of shooting as against a typical mirror within a DSLR. but for us, everything is fused seamlessly, including the motor, the mirrors and the data transfer rates. Not only the image processor, but all the internal elements use better technology to deliver fast shooting.

Are you also looking at mirrorless cameras with bigger sensors, seeing that your competitors already have such cameras?

We can understand the demand for such cameras from our consumers, but we do not have any such thing in our plans right now.

Is there any reason why you’re not making a bigger sensor mirrorless camera?

One thing is the lens – our F-type lenses have been compatible with the F-mount cameras, and many old lenses can also be used here. With the mirrorless cameras, a new type of converter needs to be created, which is a challenge for us. But yes, in my personal opinion, Nikon should have such cameras.

Do you really see mirrorless cameras cutting into DSLR market shares any time?

Why do you think that is?

Because, Japanese consumers are very rehearsed with cameras, but for Indian users, a DSLR is a fresh product, and the image quality is reliable. So, stability, for Indian consumers is very important, so I don’t think mirrorless cameras will get further share too fast.