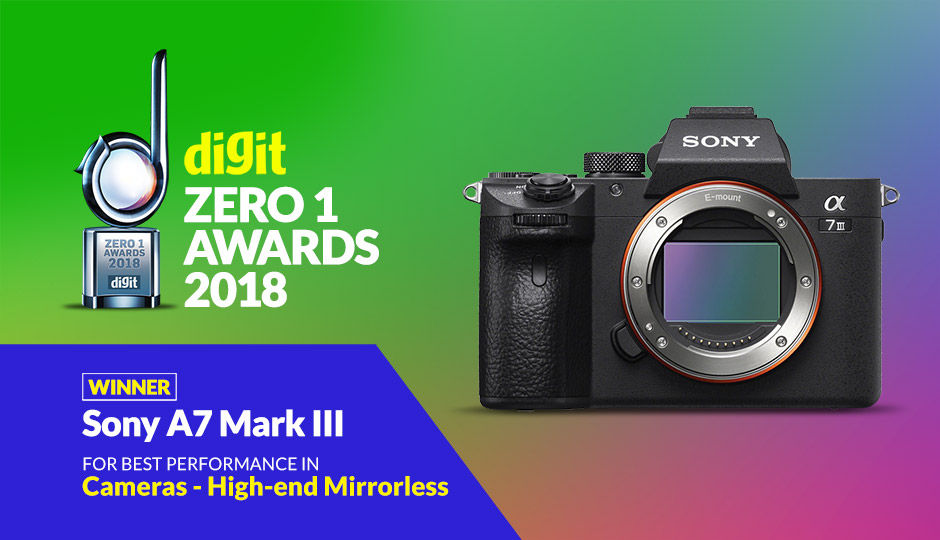 With this consideration, this year’s Zero1 awards, for the first time, look at a diverse offering when it comes to professional mirrorless cameras. Zero1 Awards is Digit’s platform that recognizes and rewards products that yield the absolute best performance, price no bar. Keeping that in mind, let’s look at the winner of the Best High-end Mirrorless Camera award for 2018 and a few important mentions that we have featured as well.

The Sony A7 Mark III might appear to be the third generation, full-frame mirrorless camera by name, but in reality, Sony has refined its technologies over multiple cameras before launching this one. The Sony A7 Mark III borrows heavily from the Sony A9, taking its superior AF (Auto-Focus) system and the same 24-megapixel back-side illuminated sensor, minus the DRAM-layer. This allows the A7 Mark III to shoot at speeds up to 10 frames per second in RAW, with AF Tracking enabled. The dual SD Card slots help in ensuring the integrity of recorded images and the battery life gave us closer to 985 shots using the viewfinder and monitor interchangeably which is pretty impressive. The images from the Sony A7 Mark III retained details and colour accuracy all the way up to ISO 125000, requiring little to no noise reduction. There’s very little about the Sony A7 Mark III to criticize, with top-notch performance. Based on its all-round performance, the Sony A7 Mark III wins our Zero1 award.

We tested the Nikon Z7 with the expectations that it would match the performance of the Nikon D850, which set the benchmark for high-resolution full-frame sensors. With a 45 megapixel sensor, the Z7 delivers RAW files with a latitude for exposure correction of a little over 3-stops, allowing the dynamic range to be extended greatly in post. The burst mode delivers on its promise and the AF system manages to keep up with most fast-moving subjects. The low light performance yields clean RAW files up to ISO 6400 but requires employing noise reduction for anything higher than that. While the Nikon Z7 does have incredible sensor performance, it loses out to the Sony A7 Mark III in terms of AF and burst speed, including its AF tracking capabilities.

Canon’s maiden full frame mirrorless camera comes with a 30-megapixel full-frame sensor that not only delivers impressive performance for photos and videos but also plays home to 5665 autofocus points that make this camera an absolute beast when it comes to focussing performance. It is, however, held back by its slow burst mode of 5fps when AF Tracking is enabled, otherwise, the camera can hit 8fps with AF locked. This results in a reduced overall performance score, but considering the price, the Canon gets our best value recommendation, since it is pretty much a steal.