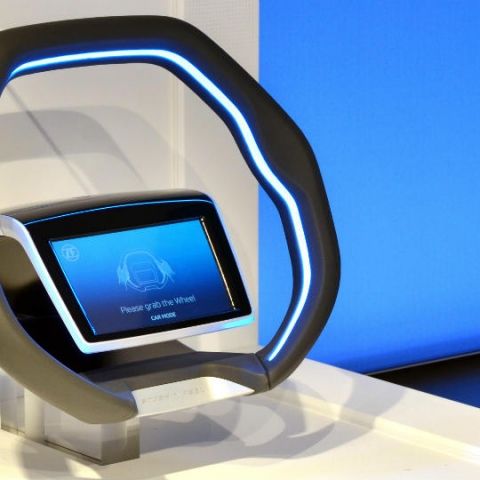 Such setups are expected to widen the scope of functionality of individual elements in a car, thereby aiding the multi-functional aspects of autonomous vehicles.

We have seen a considerable amount of quirky innovation happening around futuristic steering wheels for autonomous cars. While many carmakers are presenting concepts that completely remove steering wheels and pack in more displays than you may ever need, the likes of Porsche and Jaguar have insisted that steering wheels are not exactly going away. ZF, the prime German automotive supplier, seems to think along the same lines, but combines the presence of a steering wheel with what every single autonomous car concept has aplenty - touchscreen LCDs.

ZF's advanced steering wheel concept, presented recently, combines a standard-ish steering wheel with a 7-inch touchscreen LCD display at the centre, along with sensors along the rim of the steering wheel and LED lights to create the kind of cool, blue hue that glows in every futuristic device in every sci-fi movie ever. Juergen Krebs, VP of ZF's steering wheel and driver airbag engineering division, said in a statement, "As we prepare for Level 3 automated functions, the hand-over of control between vehicle and driver using highly accurate feedback will be critical. We believe our new concept is the most intuitive and provides the clearest feedback to the driver." What this essentially means that the steering wheel is no longer going to only play the role of a car's primary control input method. Instead, it is being seen as the point of interaction between the car and the person seated behind the wheel, one which can communicate with the driver, seamlessly gauge moods, view roads, and switch control between the car's computers and humans. In such a situation, integrating a touchscreen display seems to be the wisest thing to do.

Additionally, ZF has packed the steering wheel with capacitive sensors that can recognise gestures, thereby making operations even more seamless. You can, for instance, control primary functions such as adjusting the car's dynamics via the touchscreen, while ancillary settings can be operated via gestures. This makes room for all primary functions to be operated from the steering wheel unit itself, in combination with the virtual instrument panels that are already being included across a wide range of cars. This in turn will leave room for other displays (the central infotainment display and other panels) free for being used for uninterrupted entertainment purposes. Seeing how most autonomous cars make a major promise of converting the car cabins into moving living rooms, this can prove crucial in how information is going to be displayed and distributed in future cars.

In order to develop this, ZF had to design a workaround for integrating the airbag, which is going to deploy from the rear rim of the steering wheel. This will protect the driver's face and the touchscreen panel, in case of accidents. The entire unit seems very well thought out, and may well find implementation across mainstream autonomous cars as Level Three autonomous vehicles begin rolling out to customers in the near future. The steering unit will be on display at ZF's counter on the Consumer Electronics Show floor, which begins on January 7, 2018 in Las Vegas.