This is Tata's vision of converting Indian metros into smart cities 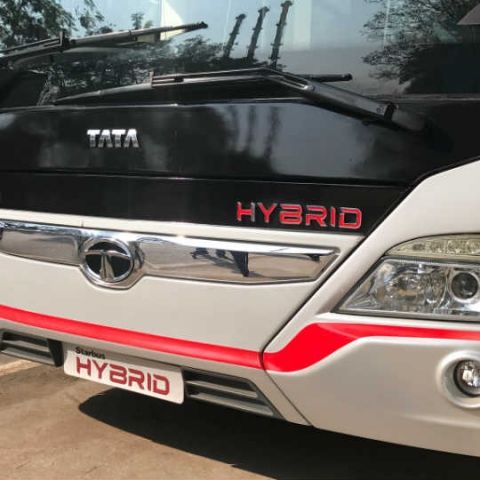 At the recent unveiling of its new range of low-emission, production-ready buses, Tata's pledge was not merely about adding new technology to its portfolio, but push for cleaner, smarter cities.

What makes a city “smart”? In a world where technology reigns supreme in every aspect of our lives, a smart city is the amalgamation of these technical elements, including the vast web of the Internet of Things (IoT), WiFi-enabled systems and more, into sectors like transportation, waste management, traffic and pollution monitoring, and more.

Walk in to Tata’s vast designing studio in Pune, and you are greeted by a long flowchart of projecting India as a smart city, and how Tata plans to fit into the ecosystem. The plan is not just about any singular module of technology, but involving IoT, public WiFi networks, robust administrative services that are connected and accessible via the Internet through smartphones, and alongside all this, the use of connected commercial vehicles that run on cleaner sources of energy.

The three major sectors
Broadly dividing a city into three major sectors give us Healthcare and Medicine, Waste Disposal and Recycling, and Transportation and Infrastructure. For any city to begin transition towards becoming “smart”, the first and foremost step is interconnectivity of these systems on a broad sense. 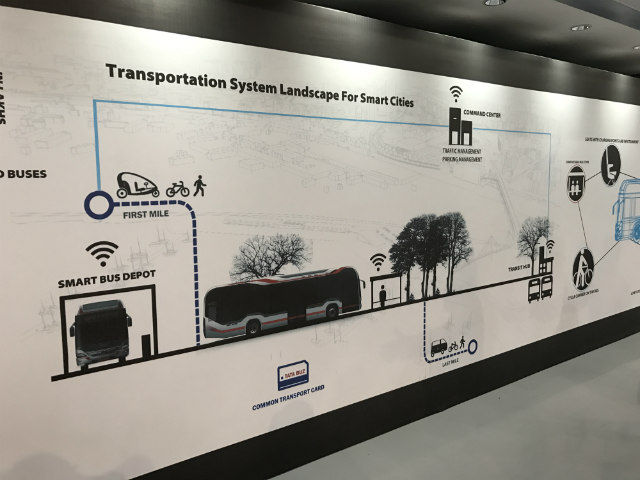 By interconnectivity, what is meant here is the use of the Internet to provide readily available information on each of these sectors to a city’s residents, on a mobile-first platform. These would ensure uniformity, ease of administration and governance, and bring essential information and resources to the fingertips of urban residents.

There is a big scope to capitalise on such elements in India, specifically in urban cities. In healthcare and medication, the presence of extensive public WiFi networks and the online presence of hospitals and medical facilities will allow easy access of such resources, and integrating maps and rosters to such services will also allow the public to be more aware in case of urgencies. As Tata foretells, what needs to be capitalised on is the urban dependance on smartphones and the Internet, and transportation has massive benefits to reap of this ecosystem.

Public WiFi and cashless commuting
Tata’s role in the pledge for converting India’s metros into smart cities is in laying down a ‘Transportation System Landscape’. The motive behind this is to cover every mile of connectivity in a city via easily accessible locomotion. The presence of WiFi connectivity is meant to ensure that everyone gets access to this landscape, and can easily maintain a seamless set of actions for smooth transportation.

For all of this, there will be a central command centre in each zone that monitors the traffic, parking and pollution levels. Data relayed into the servers will be made available to commuters, drivers and operators alike. As you prepare to step out of home, you will get access to the traffic condition, and plan your journey accordingly. 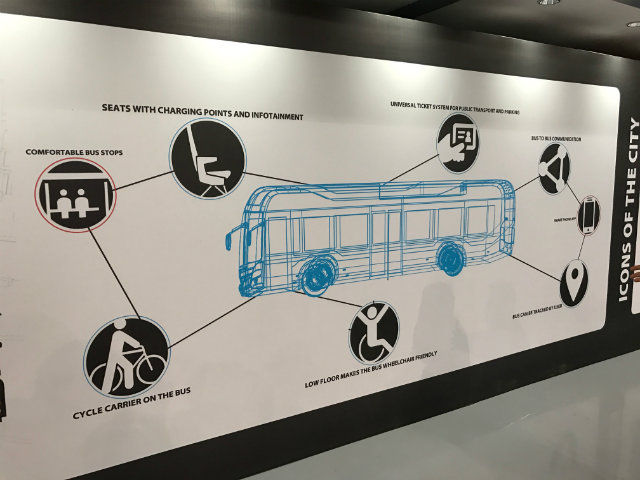 Each hub or depot of commercial vehicles will get access to the servers, so as to update availability of buses/e-bikes and e-rickshaws in specific venues, and also entertain pre-booking of seats in these. The e-bikes and e-rickshaws make up the first mile of travel, to cover the distance between your home and the nearest Smart Bus depot. In line with the recent launches, Tata’s lineup of smart buses will come equipped with USB charging ports in each seating row, and WiFi connectivity for passengers.

Each of these smart buses will ply in accordance to schedules that will also be publically accessible via smartphones, and any incidental irregularities like change in availability and schedule can be updated over the same. The network will also allow an individual to book a seat in these buses a few minutes ahead of arrival at the bus terminal, and provide live traveling statistics such as distance to destination, traffic ahead and expected time of arrival. 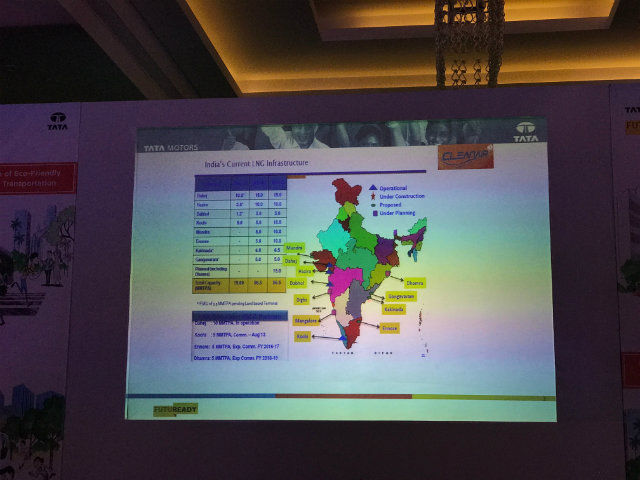 In-transit bus stops will also be WiFi-enabled, and will allow commuters to connect to the bus servers to know how far the next bus is from the stop, alternate means of travel, traffic ahead, and even peripheral elements such as pollution levels, temperature outside, etc. Smart cities will have ‘Transit Hubs’ to facilitate switching between buses for long distance commuting, and each transition stop will include last mile connectivity with e-vans, e-rickshaws and e-bikes, to cover the distance between your ultimate destination and the nearest bus stop.

Public WiFi networks, as is evident, will be crucial to sustenance of such a commercial vehicle landscape. The synchronisation of data will be semi-autonomous, as the buses are fitted with GPS and WiFi modules, and can be programmed to constantly relay real-time information on the servers. The rest of the duties will be manually overseen from the command centres. 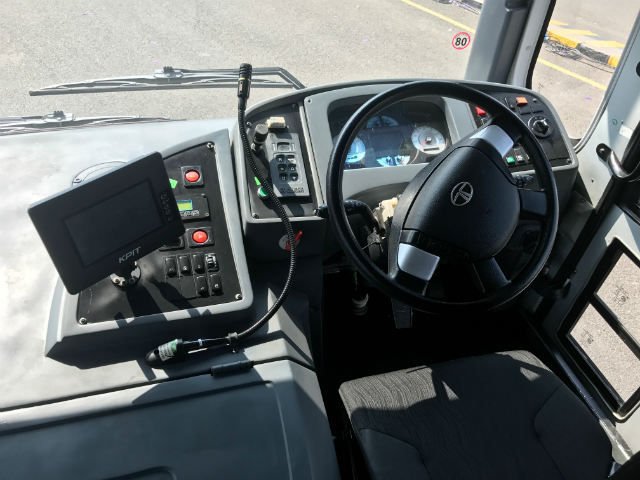 To further ease transportation, Tata’s projection for this future includes a common transport card, to be accepted at every mile of connectivity. e-Bikes, e-rickshaws and e-vans alike will support the card, and so will the buses. The presence of connectivity all through the route will also allow passengers to recharge money onto these cards at will, and not be bothered by incidental issues like lack of cash, uneven acceptance of cashless transactions by vendors and/or any similar irregularities.

The importance of clean energy
This is somewhat self-explanatory, and Tata is taking steps to address the global issue of the need for clean energy sources. Depleting conventional energy sources and rising pollution levels call for a reduce in emissions and higher mileage, among other factors.

It is with these factors in mind that Tata has launched the new Starbus Hybrid. Already available for commercial rollout and due for service with MMRDA in Mumbai from March 2017, the Starbus Hybrid has two combinations for low-emission, high-mileage buses - a CNG-electric motor combination, and a parallel hybrid mechanism powered by a diesel engine. This significantly brings down emissions and improves mileage, thereby also reducing the cost per passenger incurred by operators. 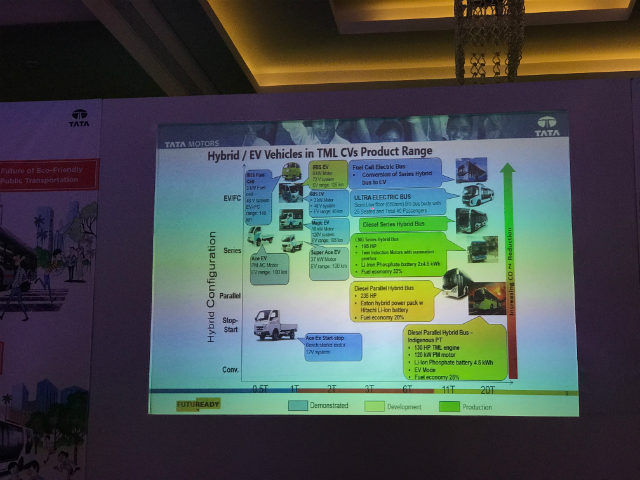 Tata’s other new buses, already available for commercial plying, include a Starbus Electric and Starbus LNG. The all-electric bus allows operators to choose the battery size, and as Tata claims, the maximum range of an all-electric bus is 120 kilometres, which should be good enough, approximately, for two full round trips before it needs to be recharged. Tata is also working to include significantly faster and easier charging methods, which will further allow more trips after one recharging stop.

The Starbus LNG makes use of Liquefied Natural Gas instead of CNG (Compressed Natural Gas), which the company claims has better power output, higher efficiency, even lesser rate of emissions and higher overall range of commuting as well. While the buses themselves do not look drastically different from before, the Starbus Hybrid is noticeably one of Tata’s most suave efforts behind crafting buses. Fit with redesigned seats, the company’s first true low-floor platform, USB ports, WiFi and GPS modules, public information displays and announcement systems and air conditioning, the new buses are primarily focused on improving emissions and mileage, than other peripheral elements. GPS, WiFi and public info systems remain constant across all options. 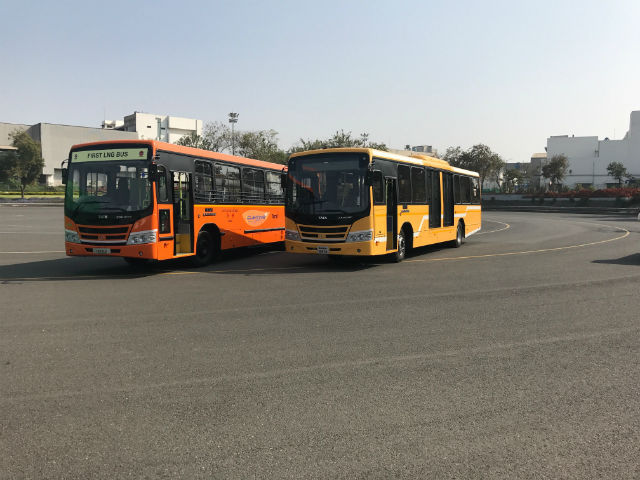 The fourth variant of Tata’s new buses is Starbus Fuel Cell. Powered by Hydrogen fuel cells, this is Tata’s pitch for zero-emission commercial vehicles. The bus has not yet been launched, as there are practical barriers to make this a reality, as against hybrid buses that majorly employ regenerative braking to power electric motors, or the all-electric ones that can be charged from local stations. There is no infrastructure in place for recharging liquid hydrogen in fuel cells, and there are specific safety issues in terms of refuelling and employing hydrogen in commercial vehicles (high inflammability being the biggest issue here).

For the shorter legs of commuting, Tata already has three-seater and seven-seater e-rickshaws and e-vans under its Ace lineup. The motive here is also to reduce extensive usage of private vehicles, which contribute to both pollution and congestion. A more robust, reliable and easily accessible network of public transport options has the potential to reduce the need for personal vehicles going everywhere, and it is this that Tata is targeting with its lineup of low emission commercial vehicle options. 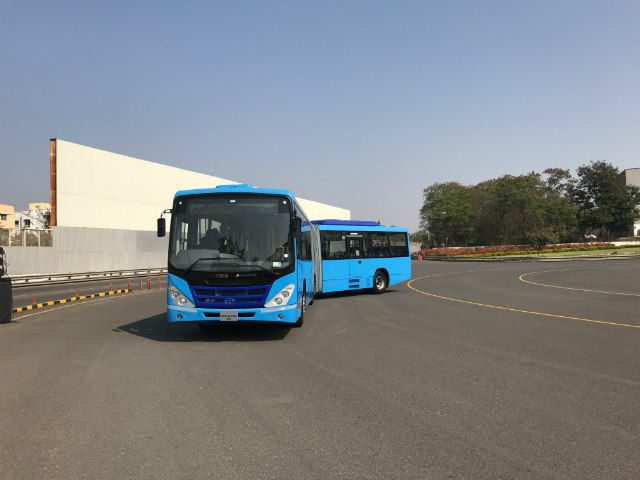 Each of these ply on cleaner energy sources, which not only focus on making cities cleaner, but also more sustainable going into the future. It is this that Tata is emphasising with its new lineup of buses. The Starbus Hybrid is evidently the more feasible commercial option right now, and can ply silently and smoothly at speeds of up to 80kmph. This makes these buses good enough for city rides, and are available in two lengths - 9m and 12m.

Setting precedence, creating identity
In every way, creating the entire landscape for smart cities will take some time, and we are not at the brink of this. The country’s public WiFi network is still an upcoming venture, with much of the urban areas still to be covered. This leaves much need for greater escalation in terms of the infrastructure in place right now, for existing bodies to upgrade in terms of awareness and system, dedicated personnel for the upkeep of this technology, wider presence of low-emission commercial vehicles, and a thorough rehearsal for all parties concerned - the residents, operators and everyone involved within a city’s daily life. 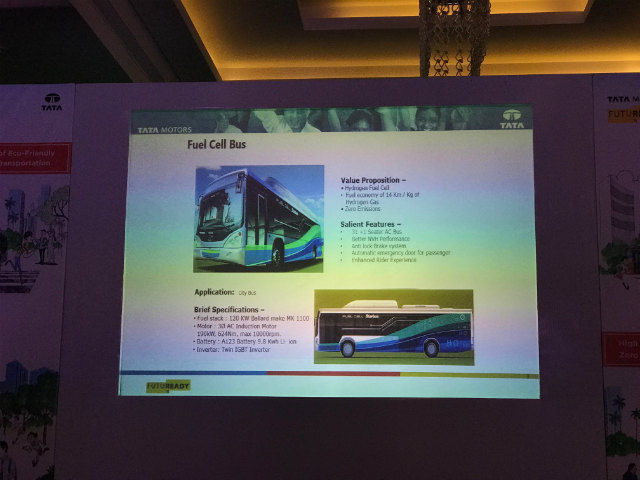 However, with the rollout of the new buses in Mumbai soon, and Tata’s plans of establishing smart transit and travel hubs for city commuting, this is more about setting precedence for more government and private bodies to participate. It is also about creating an identity in terms of a city’s life, through iconic transportation. While cities like London, Berlin and Tokyo have easily recognisable public transport options, it is practically only Mumbai that has a signature public transport system, which itself is somewhat dated in terms of the technology and infrastructure in place.

India’s need for smart cities is ever-growing, and with the rising level of prowess in terms of technology and a steadily growing IoT ecosystem, Tata plans to fit in with its new lineup of commercial vehicles. It remains to be seen how soon can we see a working framework of the eventual vision to come true.

Tata Nexon EV to be announced globally on December 19