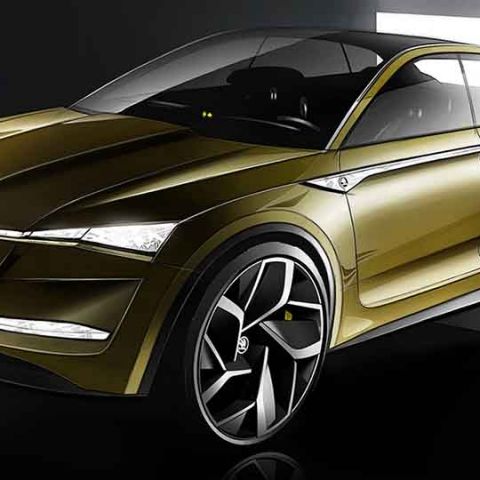 The future is all about fully electric, self-driving fast cars - that much has been clear for a while now. The specific nature of these cars are still being developed, from modifying existing minivans with a truckload of sensors to spaceship-esque concept cars loaded with touchscreen panels and cool blue lighting inside. The Skoda Vision E is of the latter kind, but it is no everyday concept car. The Vision E is of tantamount importance, as it signifies Skoda’s future strategy, going forward.

Unveiled at the Shanghai Motor Show, the Skoda Vision E is a five-door SUV coupe that looks striking upon first sight, and invokes the promise of production values - something that many futuristic concepts like the Renault Trezor and Faraday Future FFZERO1 have historically failed to do. The Vision E is also being labelled as one of the first five all-electric cars that Skoda aims to present to the market before 2025. Alongside, Skoda also pledges to focus its efforts on clean emission vehicles, by introducing more plug-in hybrid cars alongside its new EVs. The first of such kind will reportedly be the Skoda Superb Hybrid - a natural selection in terms of Skoda’s present standing. The luxury hybrid market is a promising sector, with the likes of Toyota Camry Hybrid and Lexus ES300h already in the market, and Hyundai talking about hybrid vehicles too.

Mechanics and exterior
Coming back to the Vision E, the SUV coupe is nothing short of striking upon first sight. Its battery-electric drivetrain reportedly produces 304 horses of power that will allow the car to reach 100kmph in about six seconds from standstill, and go all the way up to 180kmph. The Vision E will include two Lithium-ion battery variants - 80kW or 50kW, and the power output will be divided between two motors, 237bhp on the rear axle and 67bhp on the front axle. Specifics of the power output combination from the two motors are yet to be released. 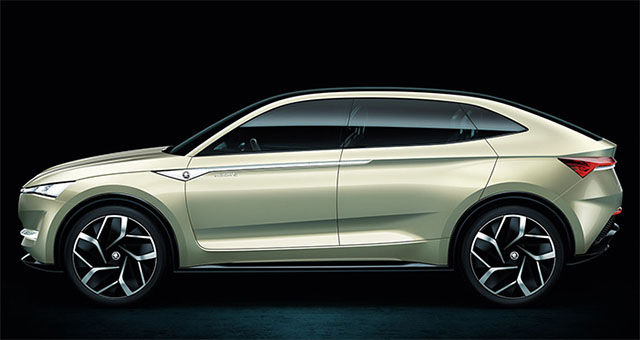 The exterior has neatly proportional sweeping lines travelling backward from its muscular Superb-like hood, and also retains the deep dents on the doors that add further character and definition to the textures. As with any electric vehicle, there is no need of a front vent, and the Vision E adds further muscle and clean lines to the hood up front. 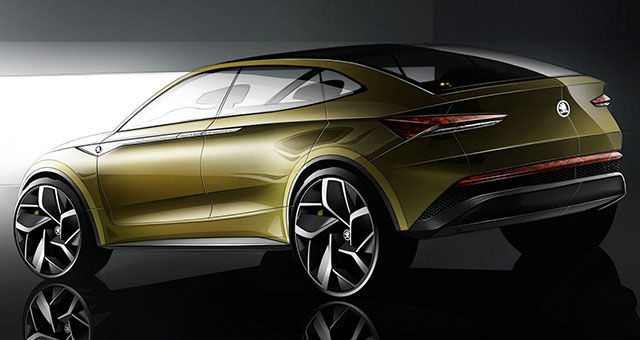 While the swooping roofline adds to its coupe-like bearings, the Vision E actually resembles the Kodiaq a fair bit from the sides. It essentially combines the Kodiaq and the Superb to produce raised riding height (in comparison to other coupes), and removes the B pillar to use wider doors without the central frame, which in turn reportedly allows Skoda to maximise interior space. Skoda also claims large boot space on the Vision E, which should be a reality on its production variant, looking at the overall bearings. The technology at play here uses clever aerodynamics and a redesigned chassis to present maximum usable space inside the car.

The technology inside
Moving inside, the Skoda Vision E retains the Laurin & Klement upholstery that signifies the Vision E to be a luxury offering. The front dash has a sweeping LED display with a possible HUD, and will include elements like voice recognition and navigation, gesture operations and augmented eye tracking for assistive operations. 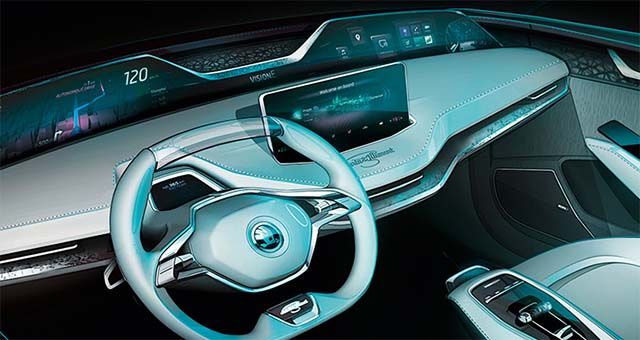 The sweeping glass panel up front will include two sections - an LED interface that relays speed, trip and charge details along with drive statistics to the driver, and an infotainment interface to control car settings for exterior and interior to the passenger side. A third LED infotainment panel takes its place where the conventional infotainment consoles are placed in cars of today. This will control all entertainment services and basic driving functions, all bundled under Skoda Connect suite. Interestingly, there is also a fourth screen right above the twin-spoke flattened steering wheel with multifunction controls, which will possibly allow the driver further controls of the car. 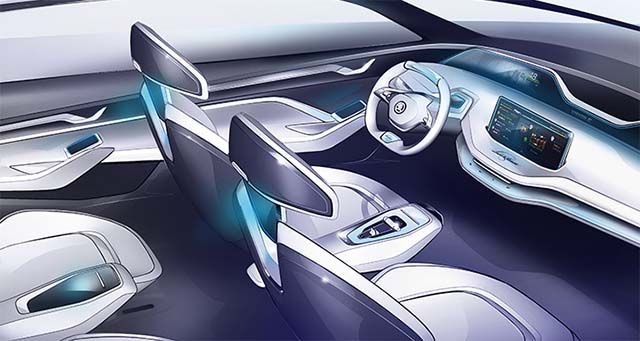 The plethora of screens continue for the rear seats. The side armrests of the two counter-opening rear doors will include wireless charging and connectivity panels for smartphones, and once you place your phones on these panels, the two passenger displays will light up to relay information and entertainment services from the connected smartphones. It is not yet clear if the two screens will also work in tandem with the central infotainment display, but in all probability, they should. 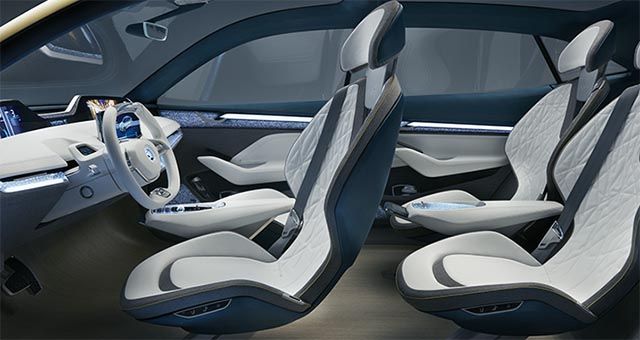 Merging with these is ambient lighting sweeping the car’s interiors, along with a redesigned central panel between the front seats making the most of the absence of a transmission knob. This will include buttons for (presumably) multiple drive and function modes, along with rather fancy exterior lighting that uses two trapezoidal lamps conjoined by Czech glass to add an added sparkle. There is a second Czech glass strip to the bottom of the front facade, that will further contribute to lighting and aesthetics. 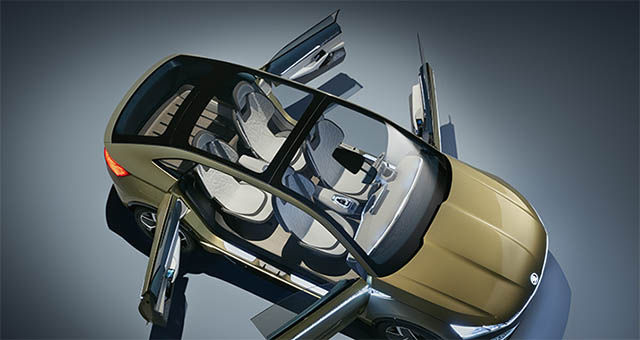 Other key elements also include rotating seats. Each of the four seats in the Skoda Vision E are individual, and can be rotated to make use of the added space inside. The side skirting of the doors also get Czech glass strips, that illuminate to add aesthetics to the car.

The significance
The Skoda Vision E is the company’s strategy of using all-electric vehicles to the fullest by adding multiple aesthetic and functional elements. The Vision E looks recognisably Skoda, and offers plenty of gizmos (augmented eye tracking, for instance) to make for a potentially stable autonomous vehicle. 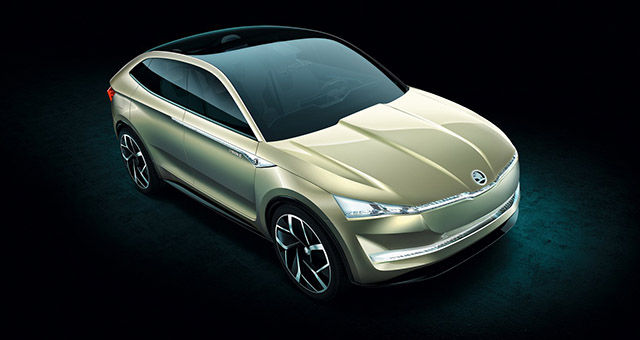 Skoda aims to unveil the production variant of the Vision E by 2020, and although some elements may go amiss there, the draft looks and reads mighty promising. Skoda will also be taking cues from the Vision E for the rest of its first EV portfolio, and that is a promising place to begin with.

5 reasons to buy an e-cycle and how to go about getting the right one for yourself
Apple is moving forward with an electric car project, targeting 2024 release: Report
Advertisements