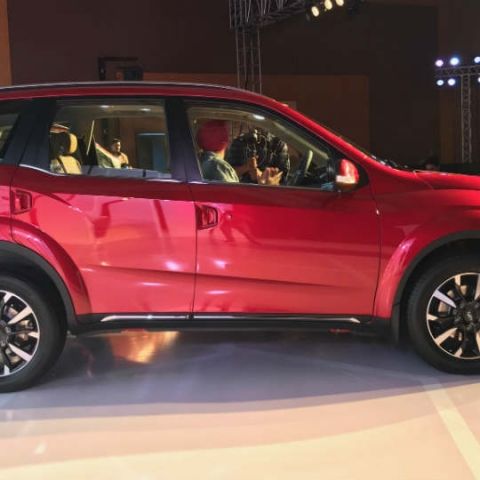 After numerous sightings and speculations, the 2018 Mahindra XUV500 has finally been rolled out officially. The Indian car maker took the wraps off its flagship SUV earlier today, presenting a distinctly noticeable facelift along with upgrades to multiple elements about the car. The new XUV500 falls in a hotly contested segment of SUVs that have the likes of the Jeep Compass and Tata Hexa, as well as more compact offerings like the Ford EcoSport and the Hyundai Creta eating into market shares of full-size SUVs. In such a market scenario, the Mahindra XUV500 will have its work cut out to hold its ground and keep buyers excited, and here's what Mahindra's thrown at it to continue its presence in the market. 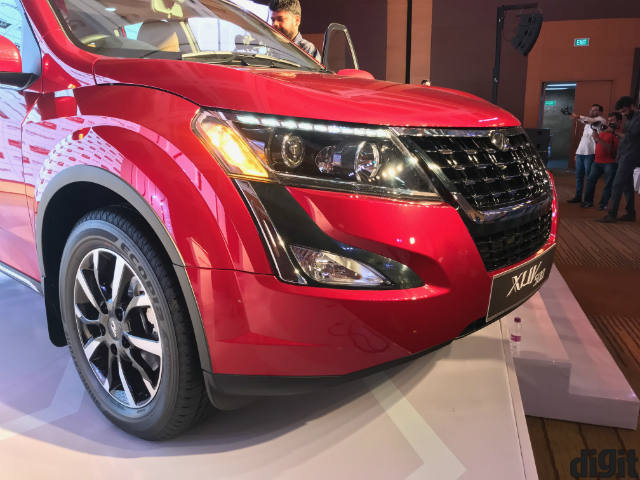 On the inside
Inside, the 2018 Mahindra XUV500 gets a 7-inch touchscreen display. The display appeared slightly dim on default settings, but does have brightness adjustment for tuning it to your preference. However, it seems to be set a little bit too deep inside. While that helps prevent glares and direct sunlight incidence, reach out to the display from the driver's position can be a bit of a bother. It is for this that the gloss black central console gets a host of buttons that allow users to access most of frequently-required modes of the XUV500. 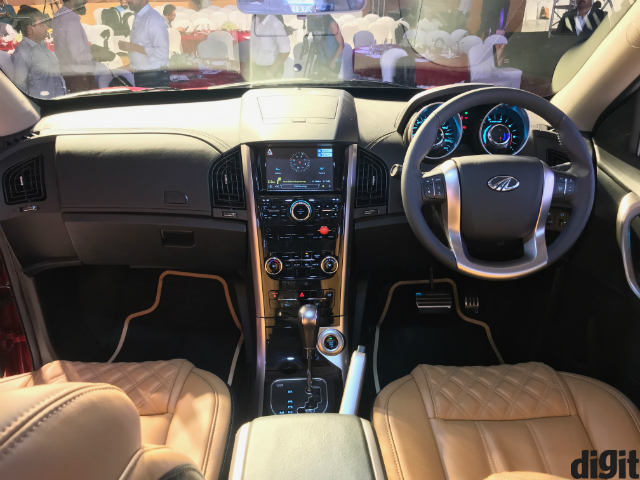 So, you get a fairly smart interface that is divided column-wise along the two home screens. The setup includes Android Auto, although no Apple CarPlay has still been made available here. But, you do get Mahindra's Connected Apps ecosystem, which includes apps like Gaana, Zomato, BookMyShow and other such services, which you can directly access from the infotainment display itself. Otherwise, it gets the standard Bluetooth connectivity for telephony, mobile connectivity and audio streaming. Apart from calling and audio playback, you can also pair your smartphone to the system and access features of the infotainment system via Mahindra's mobile app. Debuting with the XUV500 is the smartwatch connectivity setup, where the Mahindra app is automatically installed on any Android Wear and WatchOS smartwatch when it connects with your smartwatch. Following this, you can control audio playback, handle navigation, track location and tyre pressures, and get door ajar warnings via haptic feedback when the car is in motion. Unfortunately, the app only connects with your smartphone and mirrors information to wrists via the phone, and there is no direct connectivity with the infotainment system yet. As a result, the system is only active when the car's ignition is switched on and your smartphone is within range of the infotainment system. This prevents active geofencing and location tracking on the new XUV500. Nonetheless, the infotainment setup is comprehensive, and includes two USB ports, an aux port and steering-mounted controls for telephony, voice commands and music playback. The instrument cluster, too, looks quite snazzy and modern, with cool blue LEDs accentuated by chrome rings and contrasting LED alert lights making it appear rather sporty. The buttons down the central console are made of plastic, and while they are backlit and look quite nice from afar against the contrasting background, the tactile feedback is shallow and tacky. The quality of plastics has been cut down on, and it really shows. Similar button feedback persists with the steering controls and the air conditioning unit, and while the overall quality of soft touch plastics on the dashboard and door inserts have been improved, these front console and button panels feel like a discord, particularly since Mahindra has gone with premium elements all around. 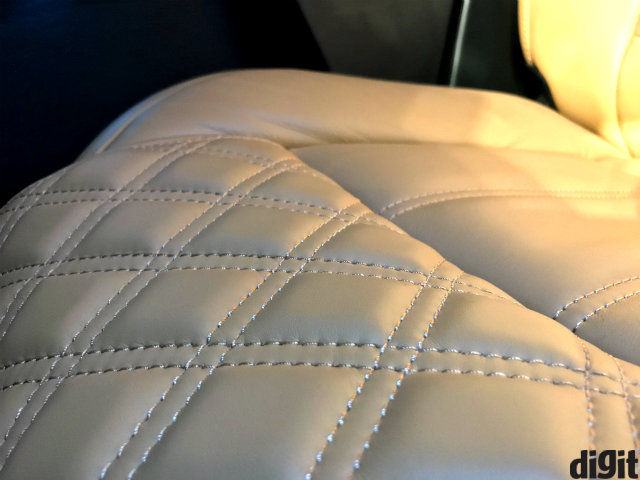 Talking of premium elements, the XUV500 gets tan leather quilted seats with double stitching, and the generous padding of the seats coupled with the stitching makes it look quite upmarket. The driver's seat also gets six-way electronic adjustment, and both front and rear rows get central armrests, with a storage bin for the front seats and two cup holders for the middle row. There is separate activation for middle-row air conditioning, and even the third row of seats get their own air flow control and storage nets to the sides. The third row of seats still remain quite functional, although for adults, anything more than short distances would end up being quite uncomfortable. Notably, there are no power sockets for the third row, while the second row only gets a 12V power socket and no dedicated USB port for quick charging. The XUV500 also gets ambient LEDs in corners, and retains the sunroof that was introduced in the previous generation's top-spec W10 variant. Both the middle and rear rows of seats can be folded down to increase boot space, but with all seats up, the XUV500 barely gets any luggage space, which is a major con that has not yet been improved on.

Safety-wise, the top-spec variant of the Mahindra XUV500 gets six airbags, ABS with EBD, ESP and hill hold/descent control, along with a first-in-class automatic emergency contact dialing system, rain-sensing wipers and ambience-sensing automatic headlamps. You also get a tyre pressure monitoring system, a reverse parking camera with dynamic guide rails, an another first-in-class ORVM logo projection to add to the premium appeal of the new SUV.

Exterior changes
The exterior changes include the new chrome-bathed grille, which now gets chrome studding, and a bifurcation with a large chrome panel. The projector headlamps and the LED DRLs also get a new design, and the fog lamps now get new cladding. Black cladding runs all along the sides and the wheel arches, and the tail gate now gets a new design, with more chrome and texturing, new wraparound LED tail lamps and faux skid plates with chrome-inlaid exhausts. The rear end also gets a spoiler lip, and the XUV500 now gets optional 18-inch alloy wheels with a new design. The standard wheels are 17-inch alloys, but the option to upgrade is available for the top trims. The range of colours in which the new XUV500 is available include Opulent Purple, Volcano Black, Lake-Side Brown, Pearl White and Moondust Silver, along with two new shades - Mystic Copper and Crimson Red. 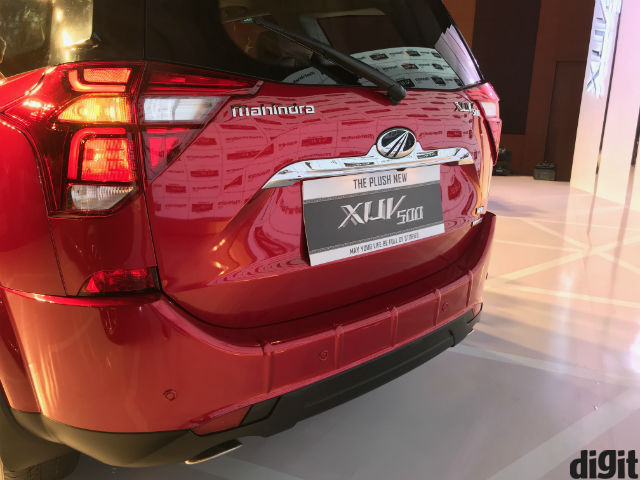 Powertrain and variant-wise price breakdown
The diesel powertrain has received an upgrade, too. The 2.2-litre, mHawk diesel engine is paired with a sixth generation electronic Variable Geometry Turbocharger (eVGT). Instead of 140bhp and 330Nm torque, the engine now produces 155bhp and 360Nm torque, and is available with both the 6-speed manual and the 6-speed automatic gearboxes. The 2.2-litre, 4-cylinder mHawk turbocharged petrol engine, meanwhile, remains in the same state of tune, producing 140bhp and 320Nm torque. The fuel tank has maximum capacity of 70 litres, with the diesel engine bearing rated fuel economy of 15.4kmpl. 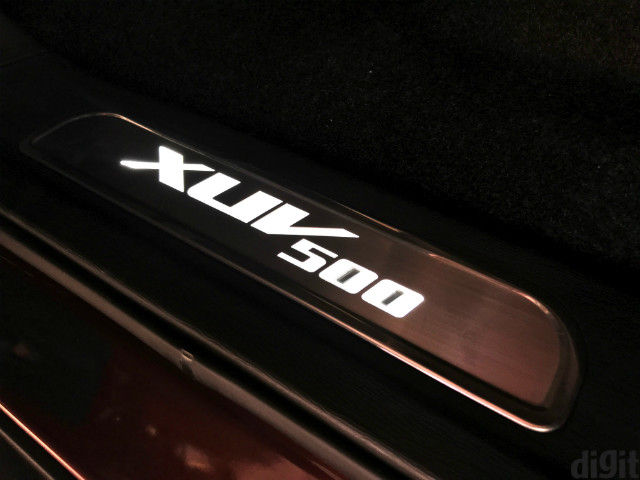 The variant-wise breakdown of the new Mahindra XUV500's pricing goes as follows:

*The petrol engine-powered G variant has most features similar to the W7 variant.