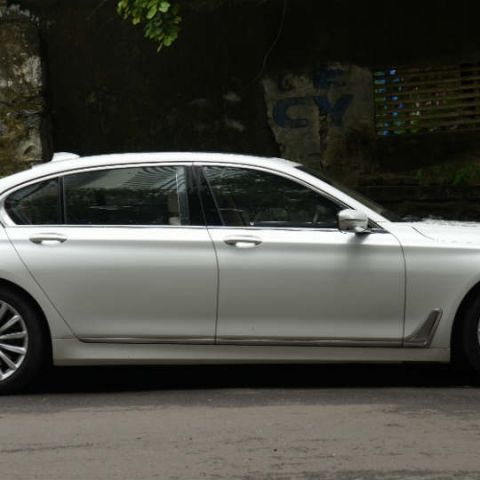 Sitting at the peak of all luxury car offerings are the Elite Four in India - the Mercedes S Class, the Audi A8, the Jaguar XJ, and the BMW 7 Series. They have been around for a while in India, but price and other constraints mean that you certainly will not see too many of them on the streets.

So, naturally, when we took the BMW 740Li out for a spin in the neighbourhood, heads turned, eyebrows were raised, whispered conversations ensued, and I could not help marvel at the impact that luxury cars make, simply by appearance. While such luxury appearances are seemingly commonplace in Mumbai, what really makes a difference is its perception, both outside and inside.

The technology inside
Customisability and in-car fragrances
The BMW 740Li is furnished with carefully picked veneer, plush leather and select fragrances. There is a sense of meticulousness to the engineering inside, from the ambient LED lighting to the infotainment, everything is made to be customized to your choice. For instance, you get a range of veneer to choose from, and even the thread on the smooth leather stitching can be colour coded as per your wish. You also get a fragrance dispenser stowed inside the dash, and BMW gives you the option to select two distinct fragrances as per your wish from their bespoke collection. We had fresh grass and hot spices installed in our limousine, and you can even control the intensity of the perfume in three different stages.

The infotainment system
The 9.2-inch infotainment display is powered by the familiar BMW ConnectedDrive infotainment firmware. The display is touch-enabled, but still retains the wonderful iDrive controller in its usual place. The system retains handwriting recognition, ten customisable shortcut keys, and gesture control. 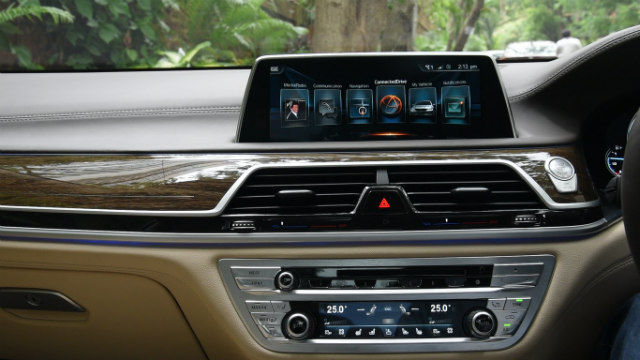 The options here remain similar to what you’d find it the likes of the BMW 5 series - a 3D satellite-linked navigation unit with live traffic data, point-of-interest, landmarks and multiple map views. Other options include driving dynamics, standard phone settings, application setup on the ConnectedDrive display, and input interfaces include Bluetooth, USB, a CD/DVD drive, SD card and aux-in.

Gesture control
The BMW 740Li recognises a range of gestures, which allow you to control aspects like volume, track selection, navigating through options, and certain customisable options that let you quickly access your favourite options. For instance, you twirl your finger clockwise (or anticlockwise) in front of the central column to turn up (or down) the volume, point two fingers at it to switch to the next track, and so on.

Touch and iDrive inputs
You get a 10-way iDrive controller with handwriting recognition pad at the centre, seven physical keys to select options in the infotainment software, and the seamless ease of usage is as good as always. The only difference here is that the buttons and the selector are girded by metal, instead of plastic. 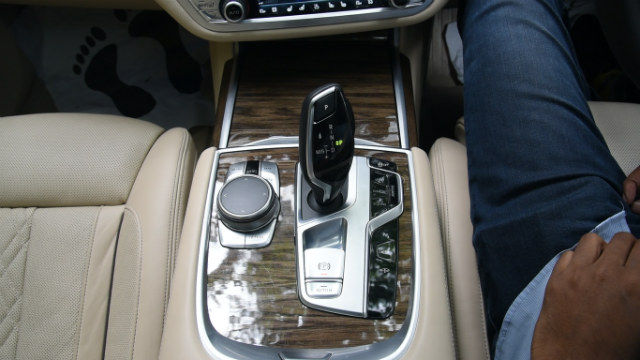 The touch performance of the BMW 7’s infotainment display is quite decent, although you will mostly be operating it via the iDrive controller. The biggest reason for this is the way it is placed - high on the dash, and away from the driver’s instinctive reach.

Audio setup
While the international trim of the BMW 740Li comes with Bowers & Wilkins speakers, the India-spec variant comes with a Harman/Kardon audio system. You get decent customisability, with an equaliser, standard balance/fader, and two modes that allow you to focus the audio delivery either across the entire car cabin or to the driver. The sound itself is somewhat underwhelming, and lacks the flourish that you would expect from an upmarket in-car audio setup. The mids sound flat, and although highs are smooth and prominent, the bass lacks depth in comparison to the other audio setups found in luxury cars. Overall soundstaging, meanwhile, is quite decent, and the Harman speakers of the BMW 740Li fare quite well in directional audio distribution.

Automatic parking
The automatic parking interface is a little difficult to fathom, since even detection of the parking space is done automatically. All that you can do is put the gear in reverse, and wait for the car to detect if enough parking space is available for it. The highly automated interface will see very few people actually using the system too often, but the entire process is well guided with screen prompts that make you only take control of the gear shifts. A simpler interface here would have helped the autonomous operations. 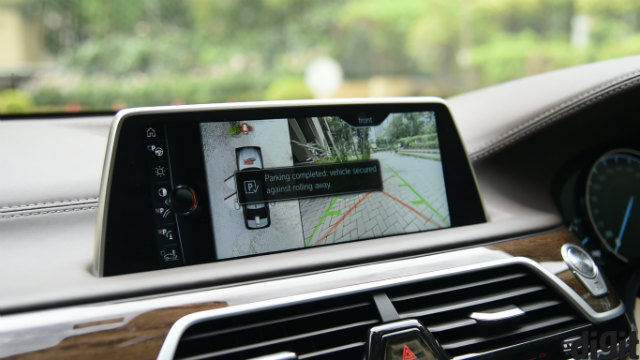 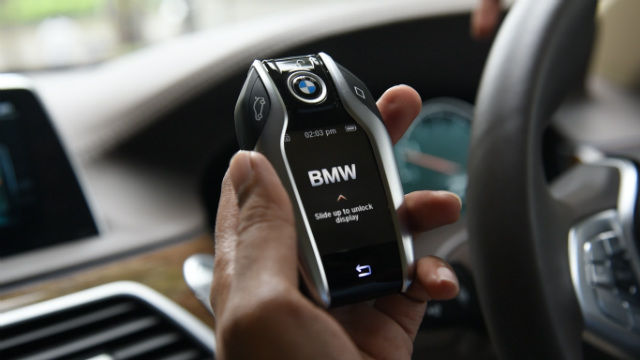 With remote park, you can opt to remotely turn on the ignition, and use a combination of the touch interface and the physical keys to roll the car out of a tight parking spot. This mode only happens to work if you’ve parked your car in parallel line to other parked cars, and the mode does not offer steering control.

Climate control
You get four-zone climate control (for all four passengers of the car), seven-step air flow adjustment, air direction control, timed and latched air recirculation, along with a host of other settings. These other settings include the fragrance adjustment that we mentioned at the beginning of our review, along with seat ventilation that allows you to either cool your seat or heat it.

Rear seat infotainment
The rear seats get their own infotainment displays by default, along with a remote control to operate the systems. The rear infotainment systems can choose to access content via the rear input sources, which include a CD/DVD drive, SD card, USB and aux. Somehow, it misses out on Bluetooth access, which can only be enabled from the front console. 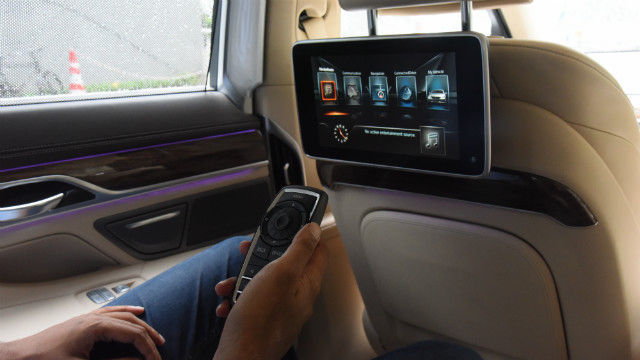 The rear displays are large enough to enjoy a movie on the go, and the large, HD displays have decent enough pixel density to enjoy content on the go. Alongside, you can also access drive settings and navigation, although phone settings are left out from the rear screens. You also get a full-fledged Android tablet on the central armrest made by Samsung. While the tab allows you to use the BMW ConnectedDrive firmware and make adjustments to the rear seat and displays, you can also use it as a standard tablet. You get a number of BMW apps, apart from which you can use your own hotspot to provide Internet connection to the tablet, and stream media to it.

Ambient lighting and Sunroofs
The BMW 740Li gets two sunroofs, for both front and rear, and a multi-LED ambient lighting system that allows users to choose colours either singularly or in combination with white LED accents. The colours include red, orange, gold, yellow, magenta, blue, violet and green. The LEDs run along the dash and doors from the front to the rear, and create a nice, plush ambiance. These LEDs also extend to the glass roofs, and both the sunroofs are inlaid with these LEDs to create a starry sky ambiance, which adds to the plush interiors.

Rear seat, and Ride quality
The rear left seat includes adjustable recline, lumbar support, thigh support, and a full stretch out mode where the front passenger seat moves forward to give you maximum space and even bring out a folding foot rest. This seat also includes a massager and ventilation that can be controlled from the rear central console. The massage patterns include whole body actuation, separate massages for hip, lower back, full back and shoulder, each with controllable intensity. The seat itself has excellent padding and support for the whole back and thigh, and even the headrest can be adjusted electronically in terms of height. The central armrest is also quite pliant, and all of this leads to one of the most luxurious seats that a car has on offer. 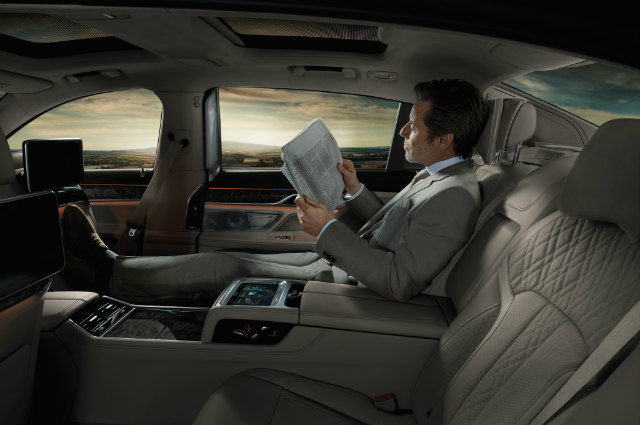 However, the ride quality could certainly have been smoother. The suspension is a tad stiffer than optimum, which means that while the car does soak up smaller road abrasions, you will feel any bump that is a little deep. The NVH (noise, vibration and harshness) levels are also not uber refined, and the quiet cabin is often unsettled by occasional rattles and noise filtering through from outside.

Driving Dynamics
The BMW 740Li is powered by a 6-cylinder, 3-litre petrol engine that produces 326 brake horsepower and 450Nm of torque. The engine combination is formidable enough, and sees the long wheelbase limousine stretch easily upward of 170kmph on open highways despite the heavy body weight. 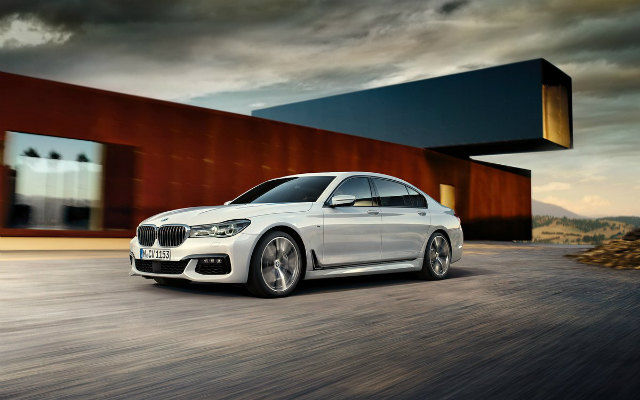 The power delivery is fairly linear, although aggression is largely controlled to focus on comfort. Despite the length of the saloon, the handling is fairly respectable even in corners, and the BMW 740Li has a nimble-footed excellence on highways that will please even the most discerning drivers. The steering wheel is decently weighted, although it does feel a little too light in city, considering the length and weight of the car. However, the fine leather wrapping and good grip, coupled with excellent seat customisation means that you will find your preferred driving position very easily, and this makes the car quite the driver’s car as well.

Bottomline
The BMW 740Li is certainly right up there with the best luxury cars on offer in India today. We only wished that the cabin was even quieter, and the audio system even better, particularly considering that it would be competing against the formidable Mercedes-Maybach S600. But, on its own terms, the BMW 740Li never fails to put a smile on your face.