We have all used vending machines at some point of time or the other - to withdraw money, buy drinks and a lot of other stuff. Never, though, have you ever used one to buy a supercar. With Autobahn Motors' new 15-floor building in Singapore, you can simply stop by at the rather gigantic vending machine to buy a supercar. Provided you have enough dough for it, this is a brilliant innovation that quite literally brings supercars to your fingertips.

The 15-floor building has four columns, and houses a total of 60 supercars, including cars by Ferrari, Porsche, Lamborghini, Bentley and more. Singapore has been known across the world for high living expenses and limited space for real estate. The combination seems ideal to have a gigantic vending machine that will dispense supercars upon request. Gary Hong, General Manager at Autobahn Motors explains to Reuters, "We needed to meet our requirement of storing a lot of cars. At the same time, we wanted to be creative and innovative." Certainly, they seem to have met their requirements of storing multiple cars in limited space, and have a unique way of selling them. 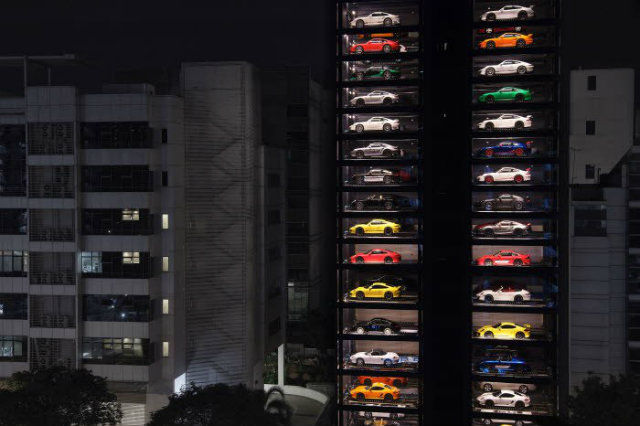 The entire building's delivery system can be controlled from a customised app on a tablet. As Covered.Asia elucidates, the building has a viewing gallery in its ground floor presentation area, where buyers are presented with a tablet to choose their preferred car. Following the selection, lights are dimmed to add a theatrical effect and the chosen car's promotional video is played. More light play ensues as the presentation ends, and the fish-bone gantries down the central spine of the building bring the car down from its resting level to the buyer within about two minutes. A large turn-table disc then turns the car around to face the customer, making the entire buying process an experience to savour.

Similar processes of storing cars have been adopted in many congested metropolitan cities, where dual-level parking is the only way to store the large number of cars. This, though, is the first-of-its-kind supercar vending machine, where cars are stored across multiple vertical levels, and are brought to a customer at the tap of a few buttons. The system is strikingly novel, and even suits the stature of the cars being sold in terms of theatricality.