The first LOL: How humour originated 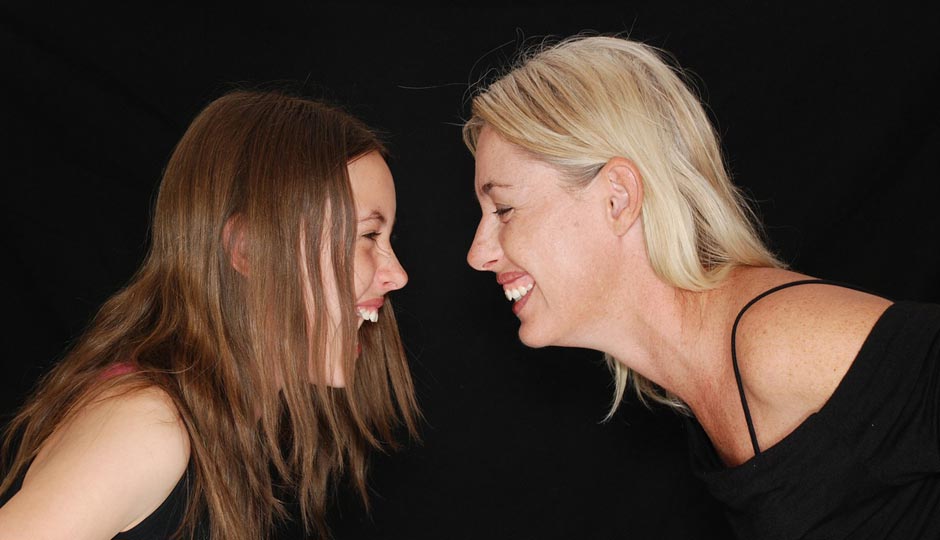 >Two hunters are out in the woods when one of them collapses. He doesn’t seem to be breathing and his eyes are glazed. The other guy whips out his phone and calls emergency services. He gasps, “My friend is dead! What can I do?” The operator says, “Calm down sir. Let’s make sure he’s dead first.” There is a short silence, then a gunshot is heard. The guy comes back on the line and says, “OK, now what?”

>What kind of murderer has fibre?
– A cereal killer.

That second joke was made up by a computer, and the first one is considered to be the funniest joke in the world. This is according to a study done by psychologist Richard Wiseman in 2002. You can read more about it on the study’s site.

Humour is something most of us are inherently capable of grasping. Of course, tastes differ, so not all of us find the same things funny. In fact, even if we find the same joke funny, we may find it funny for different reasons. While we think that comedy is all about the comedian, it is actually all centred in our own heads – the comedian merely gets us thinking, and our minds fill in the rest. 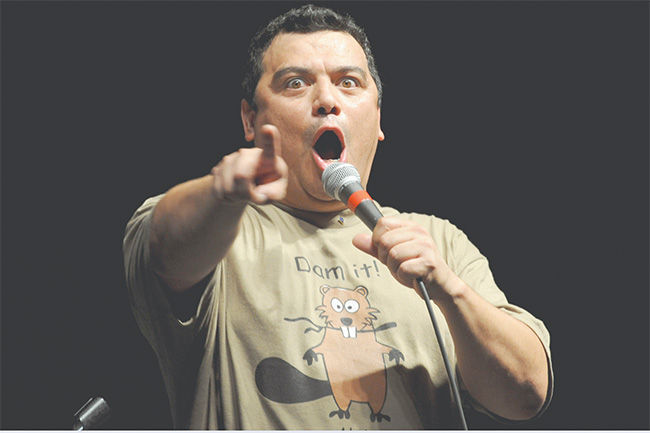 Comedian Carlos Mencia points at crowd members while telling a joke during his stand-up comedy act at the Dena’ina Convention Center, Sept. 10

When it comes to this article, however, we’re going to have to go much further back in time and look at much more than the origins of mere jokes… One way to understand the evolution of humour is to see if we humans have always had it. Of course, fossils don’t tell us anything about prehistoric humour, so we cannot get this information from our ancestors themselves. Instead, we need to look at our closest evolutionary cousins and check them to see if they can understand and partake in humour.

Given that not all of us who speak the same language can agree on what’s funny, what makes us so sure we can identify humour in other species, let alone partake in it? This was a challenge, obviously, but then we humans love a challenge almost as much as we love our jokes, right?

There is no humour without laughter and no comedian without an audience… in order for humour to prosper the way it has, it’s obvious that there should be some evolutionary reason for laughing to feel good to people. Some scientists believe laughter actually far outdated humour itself, and go as far back as our fish ancestors to explain the act of laughing. For example, there’s a theory by Dutch Biologist Jan Van Hooff that suggests that smiles might be equated to the baring of teeth that many mammals display, and that laughter might actually stem from the ‘relaxed open-mouthed’ that primates display when playing.
In a study done in 2009, it was found that the great apes do indeed “laugh” when tickled. The reason tickling was chosen is because the researchers didn’t know any good ape jokes… (ok, I think we can all agree, that was a bad joke).

There are two types of tickling as well. The first is the light tickling that feels a little itchy and causes giggles, such as when you use a feather to rub against your skin, and the second is the harsh kind, which is like jabbing your fingers into someone’s armpits or ribs, which usually causes laughter and screaming. The softer type is called knismesis and is exhibited in many species, while the harder tickling is called gargalesis, and only humans, chimps, bonobos, gorillas and orangutans show the expected reaction to it. 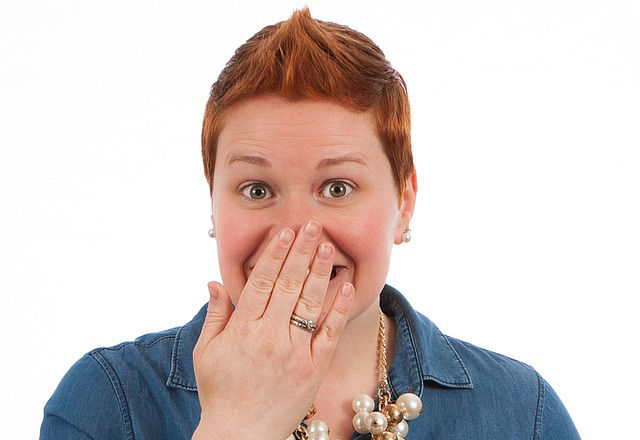 We think that perhaps many species seem to respond to knismesis because it was evolutionarily advantageous to react to that feeling, which might have been caused by dangerous bugs or spiders crawling on the animals. The response would cause the animal to react and thus remove the cause of the knismesis, and thus prevent injury or poisoning.

Gargalesis, however, seems to be something a common ancestor of humans and the great apes developed, perhaps as a way of encouraging young ones to play with adults, or to practice and develop reflexes. Of course, there is no way to comprehensively prove why this trait developed, but given that humans and the great apes exhibit it, it’s logical to assume that it developed before there were even homo sapiens, and thus the origins of ticklishness are truly ancient. 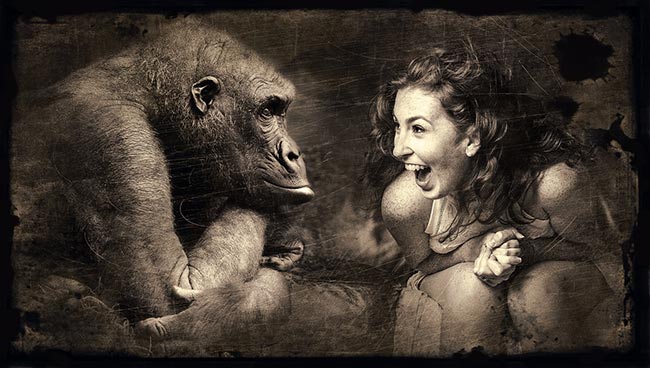 More recent studies have shown that rats too might feel ticklish (the gargalesis type), because studies have shown that when tickled hard in some spots on their bodies, rats emit high pitched squeals that researchers equate to laughing. Rats are easily trained with using both positive and negative reinforcement – they will do, or avoid doing things based on whether they are rewarded or punished for doing certain things. The researchers at Washington State University who conducted the experiment are convinced that it is a positive response (as in, the rats like being tickled) because they use tickling as a reward. The rats were willing to solve mazes and press levers, etc., (which they normally do in exchange for treats), once they knew they would be rewarded with a good tickling after completing the task.

Of course, it is totally possible that this trait evolved completely independently from the way it evolved in the great apes and us. In fact, there have been several examples of the independent evolution of traits or features in animals. The researchers behind this study are of the opinion that all mammals exhibit joy, and thus joy is a primitive emotion that spans many more species than we know of. However, this is contested by other scientists and is not supported by data, so we have to chalk it up to being merely a gut feeling, and not good science.

Responding to tickling is not the same as humour though, and this is where things get far more complex. Since we are incapable of truly understanding humour for other species, we’re going to stick to Homo Sapiens Sapiens in order to try and understand it, and hopefully trace back to the origins.

Given that humour seems to be inbuilt into us, and from a very young age (even babies laugh at silly things), and isn’t even dependent on language or really anything we learn later in life, researchers believe that it has to be genetic. Something in our DNA must code us to find things humorous, and no human culture we know of has not displayed the ability to partake in humour. Ancient Greeks give us a verifiable historical record of there being jesters and jokes as far back as the records go. In fact, it must go back to far, far before them as well, because the Australian Aborigines also showed the ability to understand and partake in humour during their first contact. Since Australian Aborigines are considered to be the most isolated group of humans on the planet*, it’s obvious that humour predates them as well. 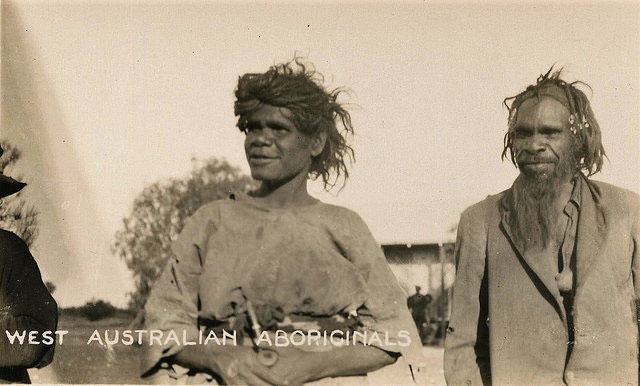 If we want to establish a timeline of humour, we have certainly already pushed it back 35,000 years, at the minimum, which is prehistoric, and thus, is impossible to nail down for sure. In terms of timelines, we have to be willing to accept “older than 35k years” as an answer. If we go by the last common ancestor of the great apes and us, we’d have to go all the way back to the last ancestor we had in common with the orangutans, which is about 14 million years ago!

If we can’t nail down when it started, can we at least nail down why it started, or perhaps even how it started? For humour to have achieved the universal appeal it enjoys now, it would have had to be beneficial to the species, the group, family or individual, because evolution demands that there be an advantage to something at those levels, or else it just will not “catch on” like it has.

One theory suggests that humour is essentially the discovery of something that doesn’t fit. There are many incongruity theories of humour, but what’s common amongst them all is the idea that humans benefit from spotting incongruities around them. Many jokes contain punchlines that are often unexpected and catch us by surprise. Somewhat like misdirection done by a magician, a joke teller relies on you not jumping ahead and ruining the surprise, yet also following the path faithfully… eventually, when the punchline comes, you immediately spot the incongruity and laugh at the joke. That laughter is not something you control, and the understanding of the joke is not something that needs to be scrutinised first, the laughter just flows naturally. 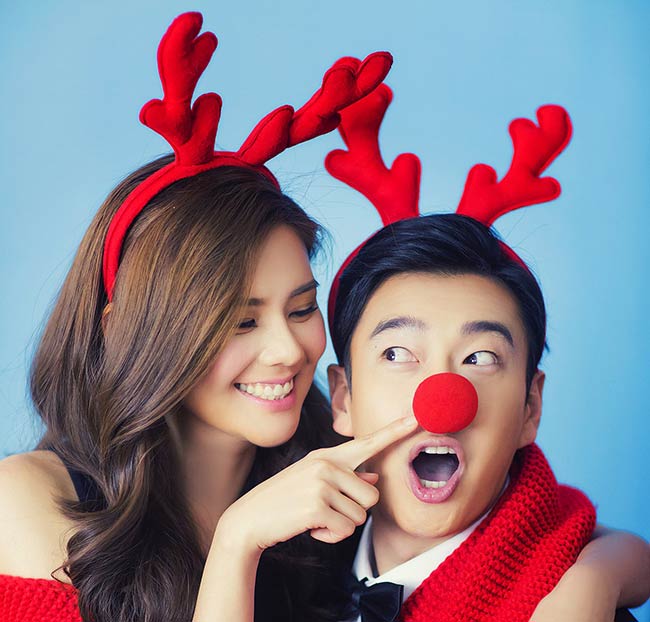 Humour probably evolved in order to elevate one’s social standing, possibly even to attract a mate

Another theory suggests that humour is nothing more than repressed aggression and sexual feelings, and it’s why so many jokes revolve around aggression or sex, in some form or the other. This obviously isn’t universal, because we often laugh at silly things that don’t involve either sex or violence in any shape or form, but that isn’t the majority of jokes out there these days.

A third theory is that humour probably evolved in order to elevate one’s social standing. Given that everyone wants a mate, but not everyone has the bodies or looks of Greek gods, it has been suggested that humour might have been used by the brainy to put down the brawny in ancient history. A good joke teller who could make people lose inhibitions and laugh openly would perhaps have had his social status raised, while he might have made the jokes at the expense of others. Because jokes aren’t a physical threat, it would stand to reason that physical retaliation against a joker would be frowned upon by the group, and thus can perhaps explain its persistence over the years.

We wish there was a definitive answer to how humour originated, but the fact is, we’re still trying to find out. Normally we ask you to write in with feedback, but instead, we want you to write in and tell us the funniest joke you have ever read/heard. The joke the team finds the funniest will win… err… whatever stuff we have lying around that we don’t want anymore.