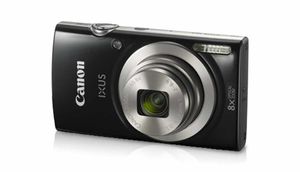 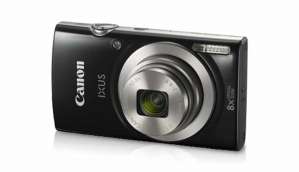 Canon IXUS 185 is a lightweight and compact 20 Megapixel Point and Shoot camera, that is equipped with an advanced Digic 4+ processor that improves the image processing quality tremendously and 1/2.3-inch CCD Sensor that captures high quality images with brilliant colours and contrast value. It comes with a powerful 8X Optical zoom power, that lets you to get closer to your subjects and features the zoom plus technology that lets you extend the zooming capability of this device up

to16X to capture far off objects with further detail. There are a number of shooting modes available on the device like AUTO, P, Digital IS, Portrait, Face Self-timer, Low Light, Fish-eye Effect, Miniature Effect, Toy Camera Effect, Monochrome, Super Vivid, Poster Effect, Snow, Fireworks and Long Shutter, so you can play with images the way you like.
Canon IXUS 185 supports aperture range from f3.2 to f9, ISO sensitivity of 100 to 800 ( making it easier to take shots in low light conditions) and a  2.7 inch wide LCD touch monitor with approximately 230k-dot resolution.. It supports built in flash, auto focus, continuous shooting at .8 shots/sec and Digital Image Stablization. It supports a Date stamp feature, so one can now recall memories at a glance, by looking at the date and time printed on each photo. There is also an Easy Auto feature, which disables FUNC.SET, MENU and INFO buttons to make it simple for users and they don’t get lost in menu pages.
read more

Write a review on Canon IXUS 185