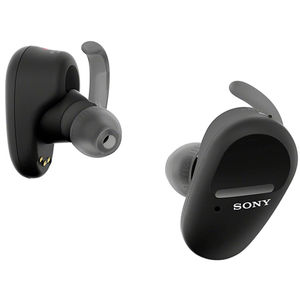 The Sony WF-SP800N is no doubt a superb addition to the true wireless audio segment, offering ANC and other premium features at a sub-20K price point. However, for those vying for minimalism when it comes to the appearance of their earphones, these may not be the ones for you since both, the earphones and the charging case are big and bulky. Nevertheless, the sound quality is pretty balanced and pleasing to the ear, and most genres of music will sound good on these earphones. Additionally, you also get a sizable 9-13 hours of battery life (depending on if ANC is on or off) on the earphones itself, with an extra 9-13 hours from the charging case. So, if you’re someone looking for a pair of sports true wireless earphones with a secure fit, ANC and good battery life, these may be the ones for you. Momentum True Wireless 2, the Powerbeats Pro, and Apple AirPods Pro, however, the Jabra Elite 75t can be purchased for a slightly lower price, albeit it doesn’t have ANC. Sony hasn’t brought the highly-acclaimed Sony WF-1000XM3 packing the QN1e processor to the Indian market, so the WF-SP800N is the most premium offering by Sony in India. So, let’s see how it performs in our tests and how it matches up to the other premium true wireless offerings in the Indian market.
read more

Sony recently launched the HT-G700 Soundbar in the US and the device is now available in India. The Sony HT-G700 3.1 soundbar has the front three channels in the bar itself and also comes with...

Sony has launched three new Bluetooth speakers as a part of its EXTRA BASS wireless speaker range. The three speakers SRS-XB43, SRS-XB33 and SRS-XB23 bring with them an interesting set of features including water and...

If you are in the market to pick up a new pair of headphones, then you can check out the recently launched Sony WH-CH710N wireless noise-cancelling headphones. The headset comes with 30mm drivers and boasts...

Sony has added a new soundbar to its portfolio in the US and we expect it to be available in India as well soon. The soundbar is the HT-G700. It has the front three channels...