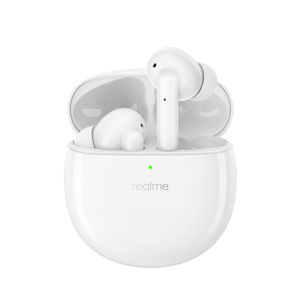 The Realme Buds Air Pro are enticing, no doubt. Equipped with features such as ANC, Transparency Mode, gaming mode, customisable controls, Google Fast Pair, and others, all packaged neatly at a competitive price of Rs 4,999, it’s easy to recommend these earphones to most users that are looking for a value for money true wireless purchase under 5K.

True wireless earphones took the world by storm in 2016 when Apple released its very first AirPods that cut all cords, allowing for a more liberating music listening experience. Since then, the category has only grown manifold with manufacturers now offering plenty of options in the budget and mid-range price points as well. Realme, with the launch of the Realme Buds Air Pro, has taken it a notch higher with this product by including ANC on these earphones, that makes it an extremely enticing purchase at this price point. Users no longer have to shell out tens of thousands of their hard-earned rupees to get an ANC-enabled pair of earphones, and the company has, in a way, democratised the technology in India. In addition to ANC, the Realme Buds Air Pro also comes packing an array of other features such as Transparency Mode, Gaming mode, custom controls, and others. The Realme Buds Air Pro will be available to purchase at Rs 4,999, alongside Realme’s new ANC neckband-style earphones, from October 16 onwards.

Xiaomi has launched the Mi Portable Bluetooth Speaker in India alongside the Mi Neckband Bluetooth Earphones Pro. The company is expanding its audio portfolio in the country as it has been making strides in this...

The reports of Apple working on releasing the new AirPods Pro 2 comes alongside the news of a new iPhone SE in the works. It is no surprise that Apple is working on refreshing its...