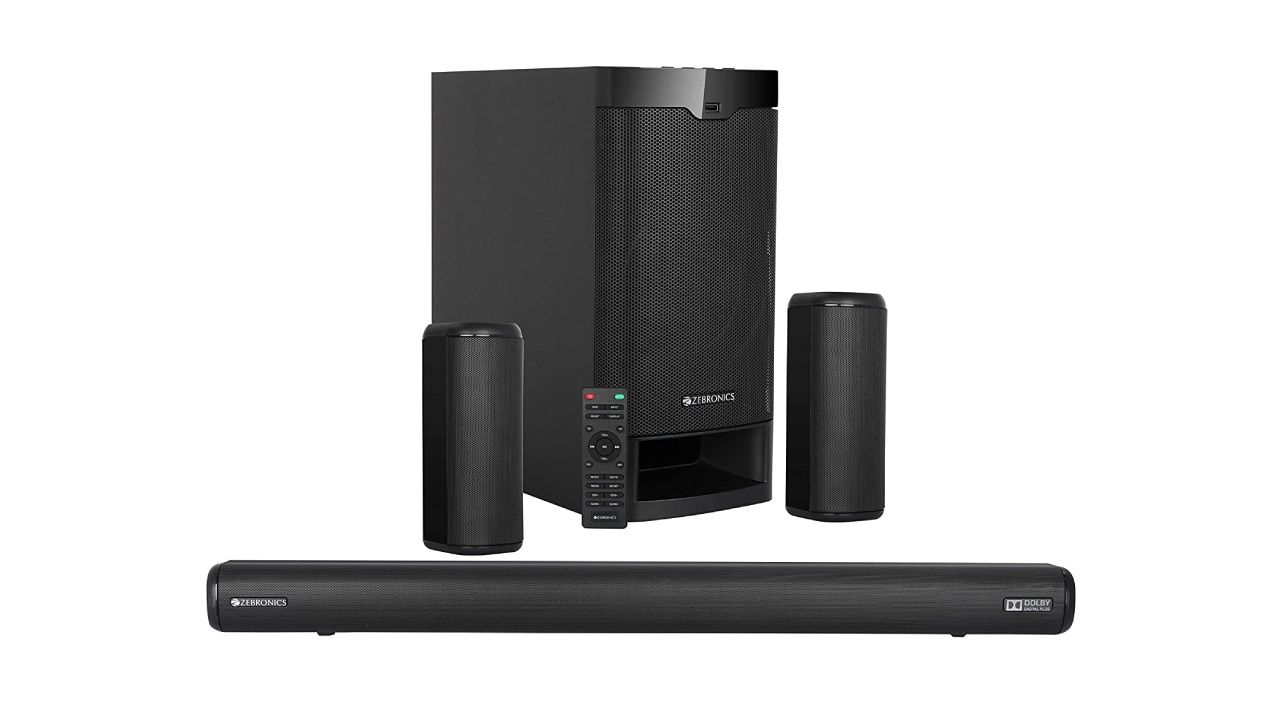 A soundbar is meant to enhance your TV viewing experience. But with the advancement in technology, soundbars today can give 5.1 home theatres a run for their money. Some of these soundbars also support features like Dolby Atmos or DTS and more. Some also give you additional HDMI inputs. These soundbars come with a wireless subwoofer and some even support wireless surround speakers. The setup for these soundbars is fairly simple. You can wall mount the soundbar if you like or place it on a table below the TV. They offer an immersive surround sound experience.

If you are looking for a 5.1 soundbar with wireless rear speakers, then this model from Sony should fulfil your needs. The soundbar comes with a solid five output system (the front three channels are in the soundbar and the surround speakers are wireless) and an additional wireless subwoofer. Moreover, it uses Sony’s Vertical Sound Technology to produce sound from a wider angle rather than following a unidirectional approach. You can connect both the additional speakers along with the subwoofer wirelessly, making it a completely wireless setup. The soundbar is further enabled with built-in Alexa and Google Assistant to let you use it through voice assistance.

With the Zeb-Juke Bar 9400, you can allow yourself to get truly immersed in Dolby Digital Plus 5.1 Surround Sound with sharply defined HD dialogue and optimized (non-dialogue) sound quality. The set comprises a three-speaker 225 W soundbar, dual 75 W satellite (rear) speakers and a 150 W subwoofer, for an impressive total of 525W RMS. Of a sleek and minimalistic design, the soundbar and satellite speakers are wall mountable and wired to the subwoofer, whose back panel sports aux, HDMI (ARC) and optical input jacks/ports. There is a USB port on the front side, and the system is compatible with Bluetooth 5.0. The subwoofer’s 6.5 inch driver’s deep bass just might prompt your neighbours to have a ‘quiet’ word with you. (All the other speakers have 2.5 inch drivers.) The soundbar has an LED display and comes with a remote for volume/media control. Lastly, the positional set-up of the various speaker components in your room would make a gamer’s auditory experience mind-blowing.

Comprising just two units, namely a Bluetooth-supported soundbar and a subwoofer, Samsung’s HW-Q60T/XL is as minimal as it gets. The soundbar houses 8 speakers (6 × 30 W + 2 × 10 W), while the wireless subwoofer is rated at 160 W, totalling 360 W rms. (A pair of wired satellite speakers can be purchased separately.) The soundbar’s up-firing and centre-firing speakers support DTS Virtual:X and employ Acoustic Beam technology, which mixes and propagates sound so that you get the impression that it’s coming straight from the screen (where the visual action is) and yet is 3D sound. Adaptive Sound technology delivers clear audio even at low volumes. The soundbar has 4K HDMI video pass-through capability, which means that you can route your media player to your TV via the soundbar without any loss in image resolution. It matches up to connected HDR 10+ content to deliver lossless, nuanced audio in tandem with the detailed images. Finally, if you already own a Samsung TV, then the soundbar syncs with the TV’s speakers using the Q-Symphony function and can be controlled via the TV’s remote, while the Game Mode gets switched on automatically.

If you are looking for a 5.1ch soundbar that works as a home theatre system, then it should have great sound output capabilities. Sony HT-RT3 comes with a 600W output, which should be an ideal fit for you. Apart from the soundbar, it comes with one subwoofer and two rear speakers as well, all of which can be connected via Bluetooth. The complete system provides a balanced sound system which should make you feel like you’re sitting in your personal movie hall.

This Samsung offering comprises a soundbar with a dedicated centre channel speaker for dialogue, a wireless subwoofer, two satellite speakers and a wireless receiver to which the satellite speakers are wired. The soundbar houses six 30 W speakers, while the subwoofer, driven by a 6.5-inch driver, is rated at 160 W. The entire ensemble gives you 460 W rms of Dolby 5.1 surround sound with deep, impactful bass. The various sound modes supported are Standard, Smart, Game, Surround Sound Expansion and DTS Virtual:X.  Connectivity to other devices is via HDMI and optical ports, and the system supports Bluetooth. In fact, you can connect to two Bluetooth-enabled devices simultaneously and have fun switching between them.

The soundbar of the JBL 5.1 Surround Panoramic houses five 50 W speakers, while the 10 inch driver of the wireless subwoofer unit is rated at 300 W, for an ear-shattering total of 550W RMS, which means that this system delivers some seriously booming bass. JBL’s Multi-Beam technology and the fact that the subwoofer can go down to lower frequencies than usual mean that you get incredibly resonant Dolby surround sound. Other features include 4K UHD video pass-through capability, inbuilt Chromecast, and support for Airplay 2 and Bluetooth, so that you can route your favourite music to the soundbar from another device, like an iPad, Mac, smartphone or tablet.